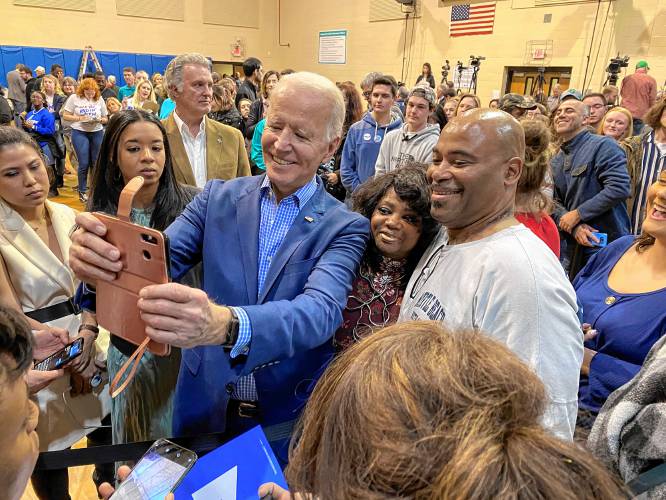 The former vice president’s banking on a win Saturday in South Carolina’s first-in-the-south primary to steady his bid for the Democratic presidential nomination.

The one-time front-runner in the race was greeted by a crowd of over 700 – large by Biden standards – at his town hall Thursday night at Coastal Carolina University in Conway, S.C.

Biden didn’t make a plea for support – but celebrity endorser Vivica A. Fox emphasized what’s at stake in Saturday’s primary.

“We are counting on you guys to start to get the 2020 election back on track,” the well-known actress emphasized to the crowd before introducing the former vice president.

After disappointing fourth- and fifth-place finishes in Iowa’s caucuses and New Hampshire’s primary where voters are predominantly white – as well as a distant second-place finish to current front-runner Sen. Bernie Sanders in last weekend’s Nevada caucuses – a convincing victory in South Carolina is considered crucial. Anything other than a win would likely bring an end to Biden’s third bid for the White House.

All of the latest polls show Biden with a lead – but they’re volatile. One survey puts Biden a whopping 20 percentage points ahead of Sanders – who’s stepped up his outreach to black voters – while another suggests the former vice president with a narrow four-point-edge over the populist senator from Vermont who followed up a win in New Hampshire’s primary with a shellacking of the rest of the Democratic presidential field in Nevada.

A Real Clear Politics average of the six polls conducted this week indicates Biden at 34% support among likely Democratic presidential primary voters in South Carolina, a dozen points ahead of Sanders in second place.

Throw in another metric – pumped up fundraising. Thanks to a well-received prime-time debate performance Tuesday night in Charleston, Biden’s seen a boost in campaign cash, which the former vice president has struggled with this cycle.

The Biden campaign touted that it brought in $1.2 million from nearly 30,000 donors in the day after the debate. And the pro-Biden super PAC “Unite the Country” on Friday said it hauled in $2.5 million on Thursday.

Another boost for Biden came on Wednesday when the former vice president landed the endorsement of longtime Rep. James Clyburn – the dean of Palmetto State Democrats and the most senior black politician in the state.

“By every indication, we expect a big Joe Biden victory but we have to continue to keep our feet on the pedal because we can’t take anything for granted. So I’m encouraging our team to keep knocking on doors, to keep making calls, keep tweeting, staying engaged,” he emphasized.

“I’m leaning toward him (Biden) but I’m still teetering,” Dye said. “I’m also thinking about Bernie. It’s between those two.”

And he said his decision will likely come down to the last minute.

Coleman Randall of nearby Little River, S.C. – who was also in the crowd – said he decided even before Clyburn’s endorsement Wednesday to vote for Biden.

“I trust Jim Clyburn. I trust Biden’s record up to this point,” he explained.

Biden’s team is hoping a convincing victory in South Carolina will generate plenty of attention and earned national media – to propel him into Super Tuesday – where some giant states like California and Texas hold contests and a third of the Democratic presidential nomination delegates are up for grabs.

Sanders – who’s making his second straight bid for the White House – urged the crowd at a rally at a park in downtown Columbia on Friday afternoon to consider his electability.

Electability had long been Biden’s major selling point – that he was the strongest Democratic candidate to take on President Donald Trump in November’s general election.

But as Sanders rolled to a victory in New Hampshire followed by a rout over his rivals in last weekend’s caucuses in Nevada, his national poll numbers have soared and more and more Democrats are starting to see the independent senator as the strongest contender to take out Trump.

Sanders also took at the president over Trump’s rally Friday evening in Charleston, S.C. It’s the third straight state where the president’s held a rally on the eve of a Democratic primary or caucus – following New Hampshire and Nevada.

Pointing to the worsening coronavirus, Sanders said Trump has his priorities backwards.

“One might think that in a midst of a major healthcare crisis, the President of the United States would be assembling doctors and scientists and researchers,” Sanders said. “Not Donald Trump. He is here in South Carolina for one reason, to disrupt the democratic primary.”

“He hopes that he can get a little media attention taken away from the Democratic candidates. How petty, how pathetic is that? So I say to Donald Trump, don’t worry about the Democratic primary cause we’re gonna beat you. Start worrying about the coronavirus and the healthcare crisis in America. Do your job as president,” Sanders added as he took a shot at the president.

Sanders headed from South Carolina to Massachusetts – a Super Tuesday state – for campaign events in Springfield on Friday night and Boston on Saturday. The Vermont senator’s hoping to defeat fellow progressive champion and 2020 Democratic primary rival Sen. Elizabeth Warren of Massachusetts on her own turn in Tuesday’s primary – one of 14 states to hold contests on Super Tuesday.

After poor showings in Iowa and New Hampshire, Tom Steyer was hoping for a strong finish in Nevada.

The billionaire hedge fund manager turned environmental and progressive advocate spent a lot of money and time in the Silver State, but didn’t get his bang for his buck as he finished in the low single digits in last weekend’s caucuses.

But Steyer – who’s been courting black voters – is optimistic things will be different in South Carolina.

The final polls show him in third place – behind Biden and Sanders – in the mid-teens.

Steyer is hoping a strong finish in South Carolina will help him in the Super Tuesday states.

“I think that’s a springboard for people to think that I can pull this party together, which is what I want,” he said.

Trump, on 1st death from virus in US: ‘No reason to panic’