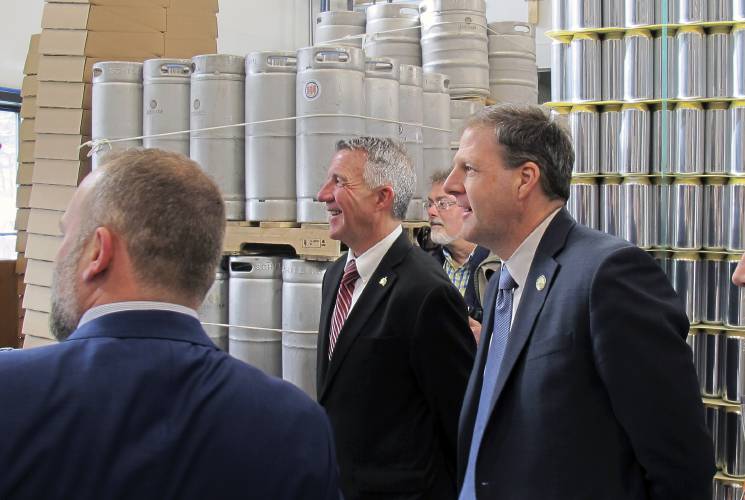 First up was the Democrats’ bill that would allow workers to collect up to 60% of their wages for up to 12 weeks to care for a new baby, recover from an illness or injury or tend to a sick family member. Employers would be required to provide benefits or send 0.5% of employees’ weekly wages to the state. Opponents consider that payroll deduction an income tax, and a similar bill was vetoed last year by Republican Chris Sununu, who told the Senate Finance Committee he’d do the same this year if the bill gets to his desk.

“It’s a nonstarter, an absolute nonstarter. It will be vetoed and that veto will be upheld and the state will go without a plan,” he said. “Or we can move forward with a plan. It really has to be about options for the people of this state.”

Sununu backed the second bill, sponsored by Sen. Jeb Bradley, R-Wolfeboro, which would create a paid leave program for state employees that private sector employers and individual workers could voluntarily join. Participants could take up to six weeks off to care for a sick family member, but they could not use the leave to tend to their own medical conditions. Bradley said he hoped Democrats and Republicans could work together as they have on Medicaid expansion and other important health care initiatives.

“The way we get things done in New Hampshire is we work together,” he said.

“That’s not so in New Hampshire,” Wallner said. “I’ve always thought of it as caring for someone who is ill or caring for a new baby. I never thought about it in terms of how important it would be for families if they found themselves in a situation where they were unable to work because of a public health quarantine.”

Questioning Bradley later, Sen. Cindy Rosenwald, D-Nashua, also mentioned the virus, outlining estimates of how fast it spreads and arguing that the Republican plan would fall short because it doesn’t cover an employee’s medical leave.

“How is it a health care bill when the employee’s own health isn’t covered?” she asked. “Doesn’t it just encourage people to go to work when they’re sick?”

Bradley said many companies already offer short term disability coverage, so including such coverage under family and medical leave would be unnecessary. Sununu’s spokesman, Ben Vihdstadt, said later the governor would welcome a provision that allows individuals to access the paid leave plan if their employer does not offer short-term disability.

While the virus argument was a new argument in favor of the Democrats’ plan, the rest of the testimony featured familiar arguments. Sen. Dan Feltes, D-Concord, a co-sponsor of the bill, said paid leave would help alleviate some of the state’s most pressing problems, from attracting young workers to allowing people struggling with opioid addiction to seek treatment.

Other than Sununu and Bradley, no one testified in support of the Republican bill. The Democrats’ bill attracted a slew of supporters, including doctors who testified about the importance of infant-baby bonding in terms of brain development, and their experiences with parents who agonized about not being able to take time off work to care for older children when they became ill.

Sebastian Fuentes testified with his wife and 2-week-old son looking on. She is taking three months of unpaid leave, Fuentes said, creating a precarious financial situation for the couple, the baby and their other three children.

“We go from happiness to uncertainty,” he said. “We need to pass this bill to offer some relief to younger Americans and young New Hampshire families like ours.”

The committee voted to recommend passage of the Democratic bill and further study of the Republican bill.

Trump, on 1st death from virus in US: ‘No reason to panic’

For Republicans and Democrats, a growing divide on approach to campaigning