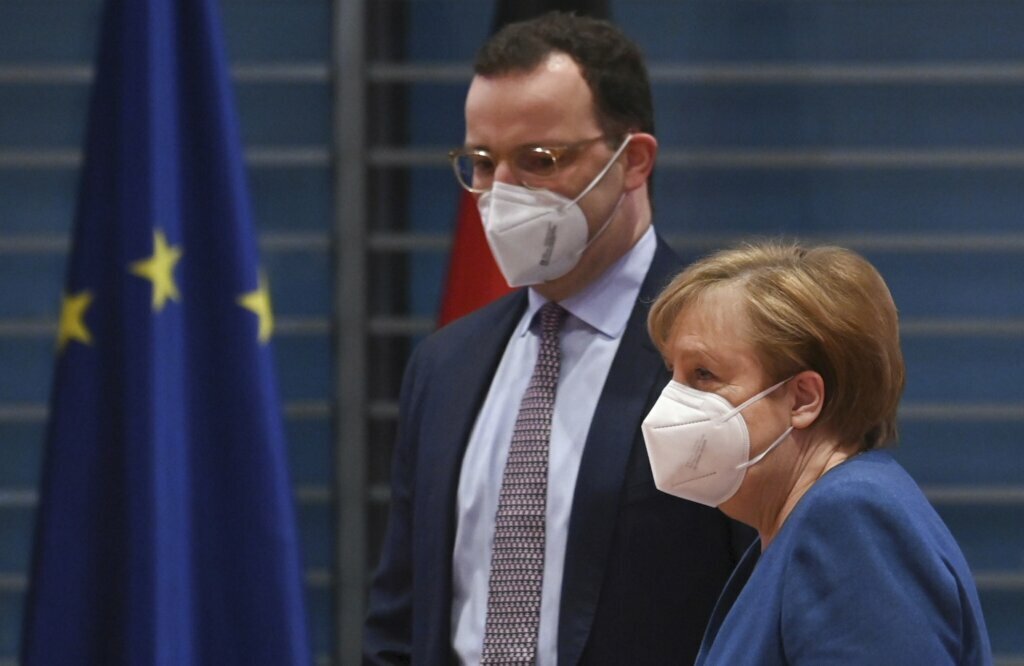 The coronavirus pandemic is colliding with politics as Germany embarks on its vaccination drive and one of the most unpredictable election years in the country’s post-World War II history.

BERLIN (AP) — The coronavirus pandemic is colliding with politics as Germany embarks on its vaccination drive and one of the most unpredictable election years in the country’s post-World War II history.

After months of relatively harmonious pandemic management, fingers are being pointed as the center-left junior partner in Chancellor Angela Merkel’s coalition government takes aim at what it says has been a chaotic start to vaccinating the population.

The discord is likely a sign of the times to come. An electoral marathon in Germany starts in mid-March, when two of six state elections scheduled this year will be held, and culminates on Sept. 26, when voters choose a new national parliament. Germany’s choices will help set the tone for Europe in the coming years.

Merkel, who has led Germany since 2005, plans to step down at the September election. It’s the first election since post-war West Germany’s inaugural vote in 1949 in which there is no incumbent chancellor seeking another term.

Surveys have shown high approval ratings for the 66-year-old Merkel during the pandemic. She has taken a science-led, safety-first approach that has helped her center-right party into a strong poll lead, although Germany has struggled since the fall to get the coronavirus under control.

“We can be glad in Germany and Europe to have such an experienced chancellor as Angela Merkel in this pandemic,” Health Minister Jens Spahn said Wednesday.

But with the new year, the end of the Merkel era is looming closer. This week, the center-left Social Democratic Party, which only reluctantly entered a coalition with the longtime leader after Germany’s last election, latched onto frustration with the slow start of vaccinations to open political hostilities.

“It was always clear that the start of vaccinations would be the point at which we would see the end of the tunnel,” the party’s general secretary, Lars Klingbeil, said. “And now we see that we are in a much worse position than other countries. We ordered too little vaccine. There is barely a prepared strategy.”

The responsibility for that, he said, lies with Spahn, a rising star in Merkel’s Christian Democratic Union. Finance Minister Olaf Scholz, who is Merkel’s vice chancellor and the Social Democrats’ candidate for chancellor in this year’s federal election, reportedly sent Spahn a list of questions about vaccine-related issues.

Spahn rejected the criticism, saying politicians must learn from mistakes but that Germany’s vaccination campaign is going according to expectations.

“It has been clear for weeks and months … that we would have too little vaccine in the beginning” because production capacities are still limited, he said, not because too little was ordered.

The health minister also noted that a deliberate decision was made to vaccinate the most vulnerable people in nursing homes first, and that process is relatively time-consuming.

Germany had vaccinated nearly 477,000 people by Friday, a week-and-a-half after it started giving shots against the coronavirus. That’s a better showing than in several European countries, but critics point to faster progress in the U.K., the United States and Israel.

Some in the governing coalition and elsewhere have accused the European Union of bungling the ordering of vaccines. But Merkel insists that having the EU take the lead in ordering doses was and is the right thing to do.

Germany’s management of the public health emergency was a relative bright spot in Europe during the early phase of the pandemic. However, virus-related deaths increased significantly in the past two months, and the government this week extended and tightened the country’s second lockdown.

Spahn is a tempting target for political opponents not just as health minister, but because it’s still unclear which center-right candidate will seek Merkel’s job — and he is a possible contender.

Her party is choosing a new leader on Jan. 16. That person likely will have the best chances of running for chancellor. It’s unclear whether any of the three main candidates for CDU party leader — conservative-leaning Friedrich Merz, a one-time rival of Merkel; Armin Laschet, a more liberal state governor; and prominent lawmaker Norbert Roettgen — will be able to match Merkel’s broad appeal. Spahn is bidding to be Laschet’s deputy.

At some point after that, the center-right bloc of Merkel’s CDU and its Bavaria-only sister party, the Christian Social Union, will choose a candidate for chancellor.

Bavarian governor Markus Soeder, the Christian Social Union’s leader, has gained stature during the pandemic as a strong advocate of tough shutdown measures, and is viewed as another possible contender to succeed Merkel. Or the two parties could turn to someone other than their leaders.

The parties currently in Germany’s government are traditionally the country’s biggest. But the Social Democrats, who provided three of Germany’s eight post-war chancellors, are very weak in polls after serving as Merkel’s junior governing partners for all but four years of her tenure.

The party has lower support in polls than the environmentalist Greens, who are likely to make their first run for the chancellery this year but have yet to nominate a candidate.

The co-leader of the Greens, Robert Habeck, described the squabbling in the governing coalition as “pathetic.”

“The (vaccination) strategy is OK, but its implementation is miserable,” he told German television channel n-tv.

It remains to be seen how polls will develop as the political battleground takes shape in 2021.

While that happens, Merkel’s coalition risks regaining its lackluster pre-pandemic image, a result of persistent squabbling. Government spokeswoman Ulrike Demmer assured reporters Wednesday that “of course the government is fully functional” — the kind of statement that had become scarce in recent months.

Stocks tick up, despite dismal data, ahead of Biden speech

Stocks tick up, despite dismal data, ahead of Biden speech

In DC, there are fewer warm havens for the homeless this year

CPAC’s 2020 Edition Was a Coronavirus Bonanza. It Will Hold Its 2021 Convention in…Florida