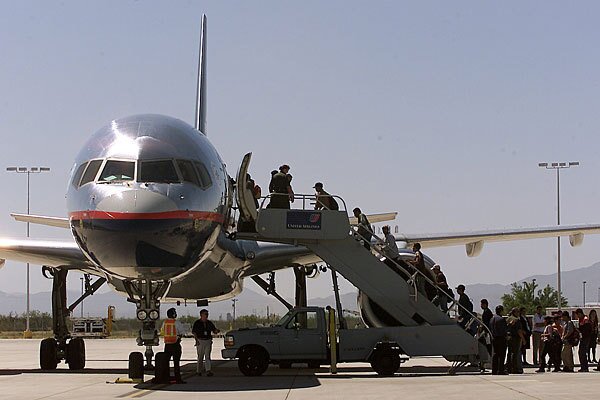 The Trump administration has deployed a team from the U.S. Centers for Disease Control and Prevention to Guatemala to “review and validate” the country’s coronavirus testing after officials there reported more than 70 deportees on two recent flights from the United States were infected, according to authorities in both countries.

At the same time, Guatemalan officials said Thursday they have indefinitely suspended deportations from the U.S.

About 30 deportees on a March 26 flight from Arizona and 44 more on a flight Monday from Texas tested positive soon after arriving in the Central American country, Guatemalan officials said.

U.S. Immigration and Customs Enforcement subjects deportees to a health screening before boarding but does not test them for the coronavirus. Guatemalan officials have been testing them after arrival.

ICE spokeswoman Jenny Burke told The Times that CDC officials are currently on the ground in Guatemala “to review and validate the COVID-19 tests performed on those arriving from ICE air flights.”

“Once results are available, ICE will determine whether to reevaluate current medical procedures with CDC guidance to ensure that any newly necessary practices are implemented,” she said.

Guatemalans who were deported from the U.S. in the last few days will be tested and in some cases retested, government officials there announced later Thursday.

“Guatemala is working together with United States authorities in revalidating the health of Guatemalans deported in the last few days,” presidential spokesman Carlos Sandoval said in a live address to the nation.

Neither a spokesperson with the Guatemalan Ministry of Health nor ICE would give further details about the testing.

The reports suggest there are far more coronavirus cases among immigrants in U.S. custody, and potentially in Guatemala overall, than publicly acknowledged.

The Guatemalan Foreign Ministry’s official count of deportees from the U.S. who have tested positive remains five, with the latest arriving in Guatemala on Monday. The government has confirmed 214 cases nationwide.

ICE has confirmed 100 cases of COVID-19 among the roughly 32,000 immigrants in its custody, and none among those it has removed. But it has only just begun limited testing in detention facilities across the U.S.

The Guatemalan health minister, Hugo Monroy, prompted diplomatic scrambling Tuesday night when he told reporters in Guatemala City that up to 75% of passengers on a deportation flight from the United States had tested positive.

He did not specify which flight, but officials later confirmed to The Times it was the March 26 flight from Mesa, Ariz.

More broadly, Monroy asserted that 50% to 75% of all Guatemalans deported from the United States have been testing positive for the virus. He later contradicted himself in a video sent out by his government, saying he was referring to a single flight.

Then came the news of Monday’s flight, with a Guatemalan official telling the Associated Press that an additional 44 deportees had tested positive. Neither Guatemalan health officials nor Foreign Ministry officials would confirm the report to The Times.

Guatemala became the first country to stop deportation flights from the U.S. last month amid fears the Trump administration could export the virus to the relatively unaffected country, prompting ICE to establish additional protocol for removal flights.

ICE subjects every potential passenger to the health screening — including temperature monitoring — by a “flight medical provider” before boarding, Burke said. Migrants who fail the screening are kept off the flight and sent to an ICE-approved facility for additional monitoring.

Experts and officials have expressed concern that these screenings are insufficient, because many carriers of coronavirus are asymptomatic.

Guatemala has paused and resumed the flights several times amid ongoing health concerns.

On March 30, Vice President Guillermo Castillo “begged” the U.S. to stop deportation flights to Guatemala, according to an interview with a local radio station.

The flights were paused again for a week but restarted Monday with 182 Guatemalans deported on two flights from Texas.

At least 25 ICE employees in detention and staging facilities and 80 other employees outside of detention have also tested positive for COVID-19, according to the agency’s latest tally.

ICE has refused to provide the number of confirmed cases among its thousands of contractors, or how many employees, contractors and detainees have been tested.

Thanksgiving could make or break US coronavirus response

Antibody Treatment Given to Trump Gets F.D.A. Emergency Approval