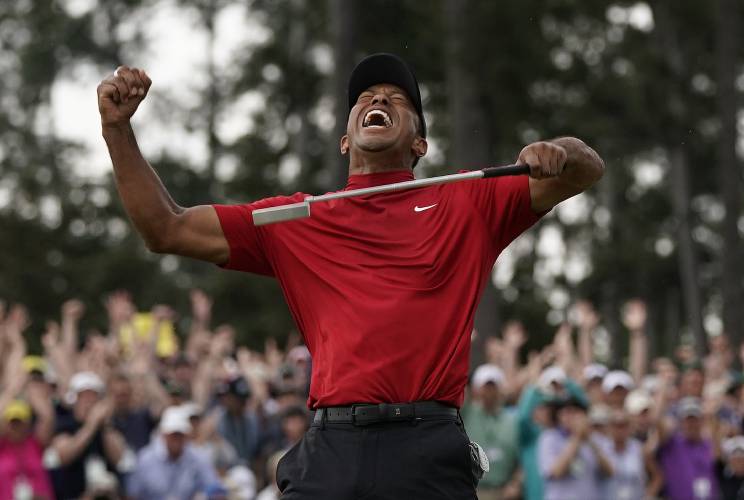 More memorable than any shot — the 8-iron that trickled by the hole at the 16th was the decisive blow — was the purposeful stride toward his son, grabbing Charlie with both arms, lifting the boy and turning from side to side.

His mother was next. His daughter. His loyal support staff. And then a lineup of players outside the clubhouse, some of them in green jackets. They had been upstairs in the locker room reserved for champions, yet they shared a feeling with the entire golf world.

“That’s going to be in people’s minds forever,” Rickie Fowler said last month, just two days before the Masters was postponed because of the COVID-19 pandemic.

Was it his biggest win?

It would be hard to rate that over his first Masters title in 1997, a “hello, world” moment not tied to advertising. Woods set 20 records that signaled the arrival of a brand of dominance never seen in golf.

His 2001 victory at Augusta gave him a sweep of the four majors in a span of 294 days. He stands alone there.

This was no less significant because of what it meant — to Woods, to his sport, to peers who grew up idolizing him and to a worldwide audience that had reason to believe it might never happen again.

“I had just an amazing amount of emails and texts that were flowing in,” Woods said in a conference call leading up to the Masters. “But I was more surprised by the amount of videos of people watching the Masters and seeing their reaction when I hit the shot on 16 or when I made the putt, whether it was on airplanes or in airports or restaurants.

“The amount of emotion that people were showing, that’s what blew my mind.”

Woods was never the same the rest of the major season. He played nine holes of practice at Bethpage Black and missed the cut in the PGA Championship. He was never a factor at the U.S. Open at Pebble Beach, site of his 15-shot victory, as untouchable as any of his records. He missed the cut at the British Open.

Woods had another knee surgery to repair minor cartilage damage. And then he won again, this time in Japan, to tie the PGA Tour’s victory record with No. 82.

In only two starts this year, in chilly California weather, he didn’t look like the Masters champion. His back felt stiff and he skipped three tournaments he ordinarily plays. And now golf is shut down, which Woods said has given him time for his 44-year-old body to feel stronger.

He had caddie Joe LaCava come down a month after the Masters to watch the final round together. Woods has watched that Masters plenty of times, and he taped a segment with Jim Nantz for perspective unlike any other for CBS to show it again Sunday to fill the void of not having the Masters this April.

Each time Woods won a major — even the first of his 15 — it was one major closer to the 18 won by Jack Nicklaus. This one was different. This was more about satisfaction and redemption than a thirst for more.

Woods said his kids once looked at him as the “YouTube” golfer because they never saw him at his best.

They were at Carnoustie in the summer of 2018 when he had the lead briefly in the final round of the British Open. They were with him at Augusta National, and that meant as much as the green jacket he wore — the jacket, he said, they fought over who could wear it on the flight home.

“It’s been incredible for myself and my family to be a part of this, and for me to be the current Masters champion, it’s crazy that somehow it all came together for one week,” he said. “One magical week.”

Make Feltes the next governor