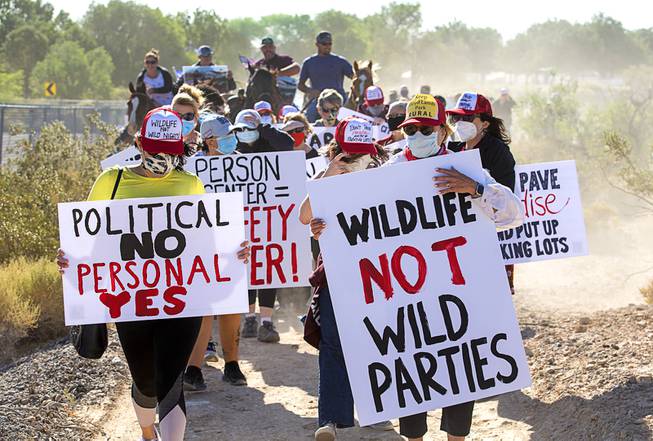 Protestors walk to an opening ceremony for mountain bike trails and a BMX pump track at Floyd Lamb Park at Tule Springs Saturday, May 23, 2020. Supporters of Las Vegas City Councilwoman Michele Fiore follow on horseback. Protesters are opposed to plans to convert a barn at the park into an events center.

A dispute over the future use of a historic, 8,000-square-foot hay barn at Floyd Lamb Park came to a head Saturday when protesters showed up at the park to confront Councilwoman Michele Fiore about plans for the structure in her northwest Las Vegas ward.

Fiore says she has championed a straightforward plan to rehabilitate and restore the hay barn at the sprawling 680-acre city park. But more than 20,400 people have signed a petition against Fiore’s proposal, some of whom attended Saturday’s protest.

Built in the 1940s and listed on the National Register of Historic Places, the hay barn has long been used as a storage and maintenance facility for the city at Floyd Lamb Park — sometimes referred to by its former name of Tule Springs Park.

For the last two years, Fiore’s office has been working to rehabilitate the structure and convert it to an events center that could be privately rented out for weddings and other functions, according to city documents.

Opponents of the project, some of whom live in the neighborhoods surrounding the park, say they support Fiore’s efforts to restore the hay barn. But they don’t approve of plans to use it for private events or parties, especially not ones that could include up to 500 people as city documents state.

They also wish Fiore’s office communicated with them about the proposal before construction work began this year.

“It concerns me,” said Michelle Johnson, resident of Silverstone Ranch that abuts the park. “Having this complex, able to hold 500 people, and all the building going on there is just going to destroy the whole atmosphere of the park.”

Like most city parks, Floyd Lamb Park has hosted private events before, and the idea to use the hay barn for events has been mentioned in park documents for years, Fiore’s office says.

But opponents say her proposal, which includes the installation of lighting, a new fence around the barn and a parking area roughly double the size of the barn, goes beyond the scope of what should be allowed in the park. The park is known for its wildlife, rural character and history as a working ranch.

“Floyd Lamb Park is one of the last few natural oases in all of Southern Nevada. People from all over the state come to enjoy the wildlife, the peacocks and the baby ducklings,” said Karen Livingston, a Ward 6 resident who started the group Save Floyd Lamb Park to oppose the hay barn conversion.

The renovated hay barn will follow the same guidelines as all rentable facilities in park system, the city’s Parks and Recreation Department says. Sound will be directed away from residences and will be banned past 10 p.m., and lighting will be “low-impact” and turned off at the same time.

Construction will cost $1,316,000 and has been funded in part by private donations. All renovations will be historically appropriate, Fiore’s office says, and the proposal is currently being reviewed by the State Historic Preservation Office. The project is expected to be completed by early 2021.

Fiore rejects the characterization of the renovated hay barn as an events and weddings center — even though city renderings show that parts of the barn will be reserved for brides’ and grooms’ quarters and that a raised gazebo appropriate for wedding ceremonies could be installed outside it in the future. She says Save Floyd Lamb Park has been spreading misinformation about her proposal, which only constitutes necessary, minor improvements to the hay barn.

“If they don’t want the hay barn fixed and they want it to be destroyed, too bad. That’s not going to happen,” Fiore said.

The protest coincided with an event organized by Fiore’s office and the Parks and Recreation Department to commemorate the opening of new mountain bike trails and a pump track at the park. Save Floyd Lamb Park organized the event because Fiore’s office had been ignoring their concerns and messages, Livingston said, although Fiore said anyone is welcome to meet with her about her plans.

Despite Saturday morning’s intense wind and the continued threat of COVID-19 in the community, at least 50 people involved in Save Floyd Lamb Park, most of whom wore masks, showed up to participate in the “socially distanced” protest.

Over a dozen counter-protesters were there as well, some on horseback and holding signs in support of Fiore, the Mayor Pro Tem. There were also a handful of cyclists attending the event who appeared to be unaffiliated with either protest.

Individual protesters squabbled a few times, and at one point, a counter-protester on horseback charged through the Save Floyd Lamb Park group in what appeared to be an accidental incident. But the demonstrations were largely peaceful.

Addressing the crowd and surrounded by city marshals, Fiore said she supported people’s right to protest and that she would gladly meet with anyone to discuss the hay barn, which will be improved for everyone’s benefit, she said. She was met with a mix of boos and cheers.

“This Tule Springs park is our jewel in the desert, and I will save and protect Floyd Lamb Park forever,” Fiore said. “It’s for you, and you.” 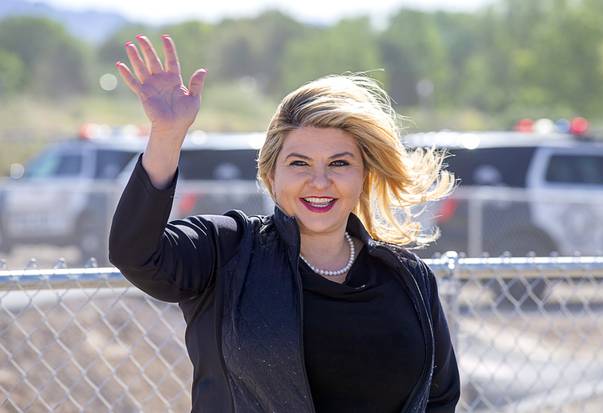 The parks department says the rehabilitation of the hay barn for use as an events center is appropriate, allowed by law and is “not a new concept.” But Livingston says her group has grounds to challenge its legality, and others in the community who were involved in the park’s early days agree.

Floyd Lamb Park has been run by the city since 2003, having previously served as a state park. It was transferred to the city through Senate Bill 444 under certain conditions, including that the city guarantee public access to the park and that it only be used for “passive recreation,” according to the bill.

Longtime Nevada conservationist Terri Robertson, who started a group called Friends of Tule Springs in the 1990s, was involved in the proceedings leading to the park’s transfer, she said. At the time, her group worked hard to ensure it wouldn’t become “an urban park.”

“We put everything we had into working to try to make sure the bill that came out of it would keep the rural aspect of the park, so that for the people who were visiting it, that same wonderful feeling they got from being in that beautiful place would be maintained,” Robertson said.

After hearing about the planned for-rent events space at the hay barn, she now feels that the intent of the bill and the official transfer document between the city and the state — which again limits uses of the park to “passive recreation” — has been ignored. Definitions of passive recreation vary, but the Environmental Protection Agency defines it as walking, hiking, fishing, horseback riding and other activities that “place minimal stress on a site’s resources.”

“I don’t see how they have the legal right to do that,” Robertson said. “It actually states in the bill that if they do not maintain the park as it is … the land would revert back to the state.”

Fiore called this assertion, which has been repeated by Save Floyd Lamb Park, a lie. “They make stuff up,” she said.

Former Clark County Commissioner Chris Giunchigliani, who served in the Nevada Assembly from 1991 to 2006, was also involved in discussions about the transfer of the park to Las Vegas. According to her, any large, private events that go beyond the definition of passive recreation constitute a violation of the deed restriction between the city and the state.

“Just because they’ve been doing events that are not appropriate, or they didn’t get caught, is not an excuse of why they should continue or be allowed to do something,” Giunchigliani said. “I’m told there were at least 30 weddings there last year, by (Parks and Recreation). Were they five and 10 people, or were they hundreds? If it’s not passive (recreation), then you’re not allowed to do it.”

Giunchigliani says Fiore should slow down the project and meet with residents. While the Ward 6 office held a meeting via Zoom with approximately 30 residents in late April, by that point, construction had already begun.

“There’s no rush to fixing this building,” Giunchigliani said.

When asked whether she would consider making concessions with residents about the building’s future use, Fiore again stated that anyone is welcome to meet with her at any time. She also noted that all prior meetings held regarding the restoration plans for the hay barn, including those with the Historic Preservation Commission and the Commission for the Las Vegas Centennial, were open to the public.

“No one has ever stepped up in the three years we’ve been working on it, and now all of a sudden it’s turned this way,” Fiore said.

Livingston plans to contact the Attorney General’s Office to try to challenge the future use of the hay barn. If that doesn’t work out, Save Floyd Lamb Park plans to start a GoFundMe to hire an attorney, she said. Venice Film Festival will go ahead in September

“It’s All at Neonopolis!” By Sandy Zimmerman

“It’s amazing what happens when People get Together for a Good Cause!” By Sandy Zimmerman