Hey. This is about us. It’s not about anything else, even Michigan football. If you care that this post is here on this date, I’m talking to you. Here is what I am saying: I can’t do it. I can do some of it. Just not all of it, anymore.

Here’s a thing that happened. I went to see a movie.

The Michigan Theater has been scrapping for things to show in the (sort-of) aftermath of COVID; one of the things they struck on was a series of Studio Ghibli films. If you’re vaguely familiar, you’re probably familiar with My Neighbor Totoro, a movie in which a couple of young girls run across a series of increasingly large and sleepy rabbit spirits. There’s also a catbus? 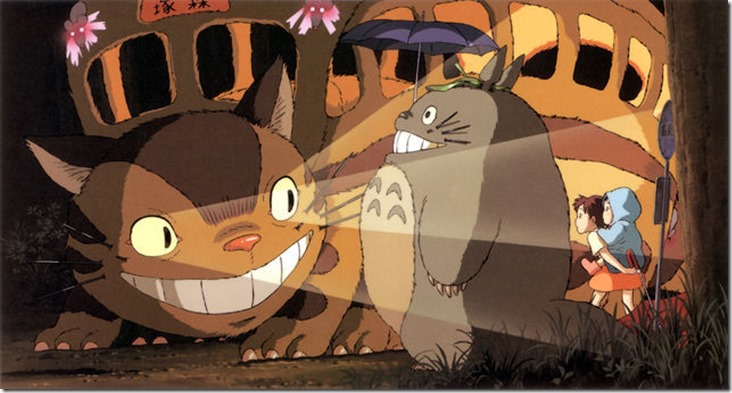 If you are more than vaguely familiar you probably know all about Studio Ghibli and would like to disclaim to me at length about it; let’s take a raincheck.

Anyway, My Neighbor Totoro is sweetness and light. When the Michigan fanbase collectively beat Spencer Hall into getting a Michigan themed tattoo he went with a block-M emblazoned Totoro, because spirit animal recognize spirit animal. It is a movie where a young girl gets lost and a young girl gets found. If you had to summarize this movie in one word it would be “sproing!”

[after THE JUMP: the other movie]

There is another Studio Ghibli movie. It is called Grave of the Fireflies, and the first line in it is “September 21st, 1945. That was the night I died.” This is the one I went to see. 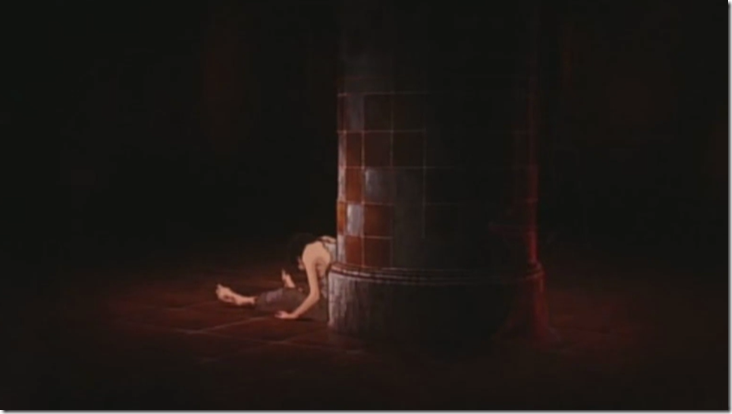 The first scene of this movie is a teenage boy dying of starvation in a subway, surrounded by the similarly doomed and the indifferent. One of the indifferent is a janitor cleaning up this charnel house; he takes a rusted tin that used to contain candies and flings it out of the station, where it lands, expels some ash and bone, and settles. 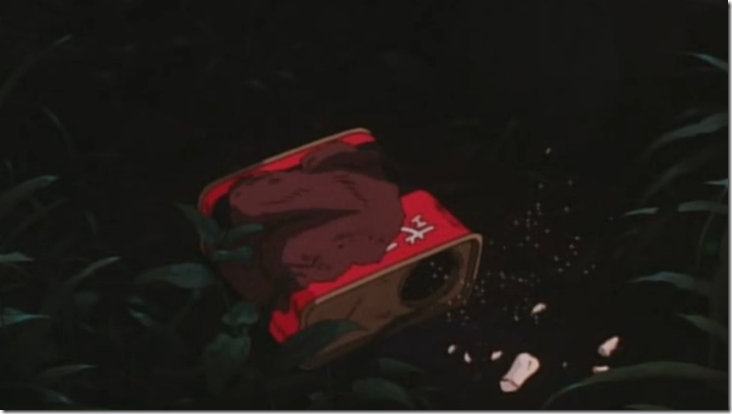 The rest of this movie is getting to the ash and bone in the tin. The two main characters are war orphans in 1945 Japan, a teenage boy and a four-year-old girl. It is the most brutally sad thing I have ever seen. It is not a movie where a young girl gets found. It immediately went on the Requiem For A Dream list of movies that I’m glad I saw and will never see again. The kind of thing where you need to remember to breathe frequently.

Here’s a thing Wikipedia told me:

The initial Japanese theatrical release was accompanied by Hayao Miyazaki‘s light-hearted My Neighbor Totoro as a double feature.

My response to reading this was to literally say “what the fuck” out loud and then tell several people this fact whether they had seen the movie or not. The mind reels. And then—because it is diseased by various flavors of online and sports—starts making analogies. One of these you have probably already deduced because you’ve seen the meme, the accurate meme.

Yes, that. Michigan is that double bill, with Grave in the fall and Totoro in the winter. But also my marriage, which went the other way until January when it started wildly oscillating between the two.

The other thing that happened is that CM Punk showed up in Chicago. Now, my re-engagement with the professional wrestling only happened after I watched Wrestlemania with Spencer in 2013, because I was in Atlanta for the Final Four and Wrestlemania is the thing that also happens that weekend. Punk did not register at the time—honestly the thing I remember most is Fandango’s absurd entrance—and he left WWE shortly thereafter. I gradually absorbed some of the Punk legend over the next several years, but didn’t actually feel anything about him until my timeline blew up a week ago when he returned to AEW after a seven-year absence from pro wrestling. (Oblig.)

I was intrigued enough to look up what he actually said after the entrance that showed up 23 times and I watched ~18 times. I had already made the decision. But by God, this is only the eleventh time I’ve wept at a pro wrassling promo:

I’d already made the decision, and felt like I was letting a lot of people down. And that is perfect, because I do understand. But I do not apologize. I already wrote a column about how my initiatives to be a different person—starting with walk more, drink less—had been obliterated by the ever-hungry maw that was football season. And she begged me. She said I should stop and try to do something else because now that we had a kid, and then kids, that the maw could no longer be sated while keeping everyone sane. I tried to feed the maw. Feeding the maw was all I knew.

Which is not to say that doing that didn’t have its rewards. I have had a job that is rewarding even when the football has gone poorly. I have met many lawyers whose wives have jokingly said “you’re ruining our marriage.” I don’t mean that in a sarcastic or even arch way. You write things and then people come up to you and don’t quite understand why you’re kind of a big deal. I—we—have carved out a place where we can write things and get paid reasonably and I can pay other people reasonably. This feels prosaic until the media world implodes around you, and then it feels magical.

This job is good and fulfilling and also it ate me alive. I remember looking at my phone during the night game against Notre Dame, the Denard After Dentist game, and feeling black and infinitely exposed, and that was in the presence of Denard Robinson. That was also ten years ago. Seven years after I started this thing. One entire cicada brood cycle. One win over Ohio State.

I’ve been grinding it out for a while. I know what’s happened to me over that time. I’ve read the comments about my mental state, and largely agreed with them. I called a good friend a month ago and he told me that last year he was reading the blog and thought that I should take this year off. And that was before a months-long crisis in my marriage that recently ended with the two of us separating. I don’t really want to put this out in public but in my hubris I’ve put my wife in columns over and over and over again so omission would eventually be confession. Better to just rip the band-aid off.

This broke me. So I have been gone. It was my great good fortune to be in a position where I could withdraw from my job and try to figure some things out when I really needed to, and I did that. This is in a tradition of early aughts blog people who turned it in to a job. Spencer Hall got drunk on buffalo. Brian Phillips wandered over to Area 51. If you are a vaguely literary sports-adjacent aughts blog guy who made it a job the white guy vision quest is a cliché.

But I didn’t figure anything out. I’m here now, because the season starts when the season starts. I’m not much better. I have reached no conclusions. I have not found an accommodation within myself. I am the proverbial camel except instead of straw I got hit by an anvil.

The practical upshots of this are:

Seventeen years is enough. For me, anyway. I have no choice but to pick up the bricks laying on the ground all around me and stack them until there’s a building. It’s not going to have the same shape. We’ll see what it looks like.

US hits 70% vaccination rate — a month late, amid a surge