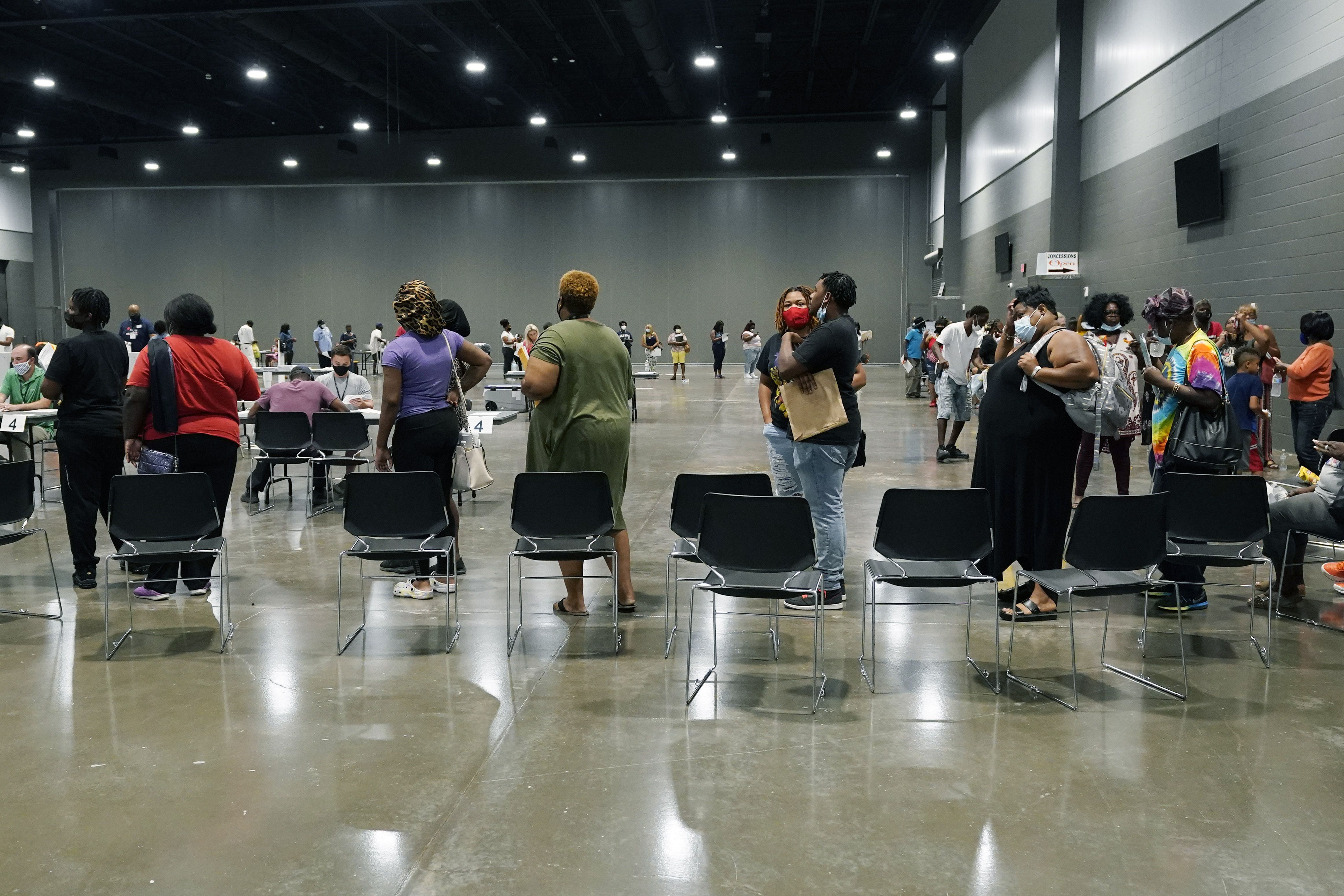 CHARLESTON, W.Va. — West Virginia has seen its highest number of weekly cases of the coronavirus in seven months, fueled by the more contagious delta variant.

The 5,333 new positive cases reported statewide for the six-day period ending Saturday were the highest since more than 5,900 cases were reported for the seven-day week ending Jan. 17. Figures for Sunday will be released on Monday.

The number of deaths from COVID-19, the illness that can be caused by the coronavirus, grew for the second straight week. There have been at least 3,064 virus deaths statewide since the start of the pandemic.

MORE ON THE PANDEMIC:

__ Louisiana hospitals are packed with COVID-19 patients, fear the arrival of Hurricane Ida

— Russia’s virus-related deaths hit record of over 50,000 in July

— Once a beacon of safety, Hawaii is seeing a surge of coronavirus cases driven by delta variant

— U.S. intelligence agencies remain divided on the origins of the coronavirus

— U.S. battle over masks in schools has shifted from school boards to courts

HONOLULU — Hawaii has reported nearly 1,700 new COVID-19 cases, which is the state’s highest level for the pandemic, though officials note that the count includes a backlog from one lab.

The Hawaii Department of Health reported 1,678 cases Sunday, while noting that it included a partial catch-up of reporting after one lab experienced system errors from Aug. 15 to Aug. 25.

The state health director Dr. Elizabeth Char says that “this tidal wave of cases is straining our ability to respond at all levels — our hospitals, our labs and even our morgues are nearing or at capacity.”

Hawaii also reported two deaths from COVID-19, both women older than 60 with underlying health conditions. That brings the state’s totals since the pandemic began to 62,229 coronavirus cases and 589 deaths.

HONOLULU — Hawaii has reported nearly 1,700 new COVID-19 cases, which is the state’s highest level for the pandemic, though officials note that the count includes a backlog from one lab.

The Hawaii Department of Health reported 1,678 cases Sunday, while noting that it included a partial catch-up of reporting after one lab experienced system errors from Aug. 15 to Aug. 25.

The state health director Dr. Elizabeth Char says that “this tidal wave of cases is straining our ability to respond at all levels — our hospitals, our labs and even our morgues are nearing or at capacity.”

Hawaii also reported two deaths from COVID-19, both women older than 60 with underlying health conditions. That brings the state’s totals since the pandemic began to 62,229 coronavirus cases and 589 deaths.

ATHENS, Greece — Clashes erupted in Athens on Sunday evening between the police and some participants in a protest rally against COVID-19 vaccinations.

Police estimate the participants in the rally in central Syntagma Square at between 7,000 and 8,000.

As the last of the speeches denouncing government plans to make vaccinations for health workers and students mandatory were finishing, some youths attacked police standing before the tomb of the Unknown Soldier, next to the Greek Parliament with bottles, firecrackers and some firebombs.

Police used tear gas, stun grenades and a water cannon to disperse protesters, who shouted obscenities at the police and against Prime Minister Kyriakos Mitsotakis.

While over 5.7 million people in Greece’s population of 10.7 million have been fully vaccinated, there has been a recent resurgence of cases and hospitalizations, almost entirely fueled by the delta variant and mainly affecting the unvaccinated.

WASHINGTON — The government’s top infectious disease expert says the U.S. is sticking with its recommendation for Americans to get coroanvirus booster shots eight months after receiving the vaccine but will be open to changes based on evolving data.

Dr. Anthony Fauci says there’s “no doubt” in his mind that people will need to get an extra shot after they have received the two-dose Pfizer or Moderna vaccine, given the highly contagious delta variant.

He indicated the administration remained focused on doing that in an “expeditious” and “feasible” way after the eight-month mark, with doses beginning the week of Sept. 20, pending approval from the Food and Drug Administration.

Throughout the afternoon, thousands marched in the German capital’s Friedrichshain, Prenzlauer Berg and Mitte neighborhoods. More than 2,000 police officers were on duty across the city to respond to the protests.

Police had banned more than a dozen planned protests for this weekend, including from the Stuttgart-based Querdenker movement, the most visible anti-lockdown movement in Germany. A court ruled to allow one such protest, planned for an estimated 500 people on Saturday and Sunday.

The 151,200 doses of Johnson & Johnson COVID-19 vaccines arrived at Aden airport, the U.N. children and health agencies said. The shipment is from the United Nations-backed COVAX initiative.

The doses would be used to vaccinate healthcare workers and other priority groups in the war-torn country, the UNICEF said.

Earlier this year, Yemen received a 360,000-dose shipment of the AstraZeneca vaccine from the COVAX initiative.

Yemen has been convulsed by civil war since 2014.

JERUSALEM — Israel has expanded its coronavirus booster shot program to include anyone over 12.

The decision, approved Sunday, is the latest phase of a booster program that began last month with Israelis over 60. It was expanded in phases over several weeks to people in their 50s, 40s and 30s. Some 2 million people — more than 20% of the country’s roughly 9 million people — have received a third dose.

Israel was one of the first countries to vaccinate its population early this year, allowing the government to drop almost all restrictions on public activities. But it now has one of the world’s highest rates of infection due to the rapid spread of the delta variant, even among the vaccinated, and has reinstated mask mandates and limits on crowd sizes.

Israel approved the booster program after experts concluded the vaccine’s effectiveness wanes over time. It is now offering boosters to anyone vaccinated over five months ago. Early data has indicated that the booster is slowing the spread of the delta variant and preventing serious illness among the vaccinated.

TEHRAN, Iran — The police chief for Iran’s capital says a gang of thieves has robbed scores of COVID-19 vaccines after attacking a hired car carrying the doses, media reported.

The robbery comes as Iran, with over 106,000 virus-related deaths, has the highest death toll in the Mideast but only 8% of its people are fully vaccinated.

He did not say which vaccine was stolen. Iran generally uses the Chinese-made Sinopharm, although it also has used some Russian made Sputnik-V, AstraZeneca and its own domestic CovBarekat vaccine.

On Sunday, Iran registered 581 daily deaths and more than 31,000 new cases. Last week on Tuesday, Iran hit a record of 709 patients dying in a single day.

The country is struggling through a fifth wave of the disease driven by the highly contagious delta variant.

DUBROVNIK, Croatia — Summer tourism has exceeded even the most optimistic expectations in Croatia this year. Beaches along the country’s Adriatic Sea coastline are swarming with people.

Guided tours are fully booked, restaurants are packed and sailboats were chartered well in advance.

Croatia’s tourism industry was caught by surprise. There had been fear that the coronavirus pandemic would discourage people from traveling.

A tour guide in the southern city of Dubrovnik that is known for its Old Town and nightlife and is Croatia’s most popular destination said this week that “it’s almost like 2020 never happened.”

The success of the summer season is essential to Croatia’s economy, which is among the weakest in the European Union.

TOKYO — Japan’s minister in charge of the vaccine rollout has promise a timely administering of booster shots for the coronavirus as the nation aims to fully vaccinate its population by October or November.

Taro Kono said Pfizer and Moderna booster shots will arrive early next year in time for medical workers and the elderly, who were prioritized and mostly got their second shots by July.

A digital system for proof of vaccination will be available later this year, he added.

Japan has lagged among developed nations on vaccinations, with its fully vaccinated now at about 43%.

WASHINGTON — The rancorous debate over whether returning students should wear masks in the classroom has moved from school boards to courtrooms.

In at least 14 states, lawsuits have been filed either for or against masks in schools. In some cases, normally rule-enforcing school administrators are finding themselves fighting state leaders.

Legal experts say that while state laws normally trump local control, legal arguments from mask proponents have a good chance of coming out on top. But amid protests and even violence over masks around the United States, the court battle is just beginning.

Mask rules in public schools vary widely. Some states require them; others ban mandates. Many more leave it up to individual districts.

Big school districts that want to require masks are in court and battling governors in Florida, Texas and Arizona. Worried parents are suing over similar legislative bans on mandates in Utah, Iowa and South Carolina.

HONOLULU — Kuulei Perreira-Keawekane could barely breathe when she went to a Hawaii emergency room. Nausea made it difficult for her to stand and her body throbbed with pain.

Like many Native Hawaiians, she was not vaccinated against COVID-19.

Perreira-Keawekane’s situation highlights the COVID-19 crisis that is gripping Hawaii as hospitals are overflowing with a record number of patients, vaccinations are stagnating and Hawaiians are experiencing a disproportionate share of the suffering.

Hawaii was once seen as a beacon of safety during the pandemic because of stringent travel and quarantine restrictions and overall vaccine acceptance that made it one of the most inoculated states in the country. But the highly contagious delta variant exploited weaknesses as residents let down their guard and attended family gatherings after months of restrictions and vaccine hesitancy lingered in some Hawaiian communities.

Now the governor is urging tourists to stay away and residents to limit travel, and leaders are re-imposing caps on sizes of social gatherings. And in an effort to address vaccine hesitancy, businesses and nonprofits launched a public service campaign aimed at Native Hawaiians, many of whom harbor a deep distrust of the government.

Tillamook County Emergency Director Gordon McCraw wrote in his request to the state that the county’s sole funeral home “is now consistently at or exceeding their capacity” of nine bodies. He added that virus cases among staff have made them unable to transport bodies to other counties.

The refrigerated truck arrived in the county on Friday. Doan said that it was loaned by Klamath County.

The Tillamook County Board of Commissioners says there were six COVID-19 deaths in the county from Aug. 18 to Aug. 23. The number surpassed the five total COVID-19 deaths that occurred during the first 18 months of the pandemic.

CDC panel grapples with who needs a COVID-19 booster shot

Booster use may be expanded

Banderas skewers his own craft in ‘Official Competition’