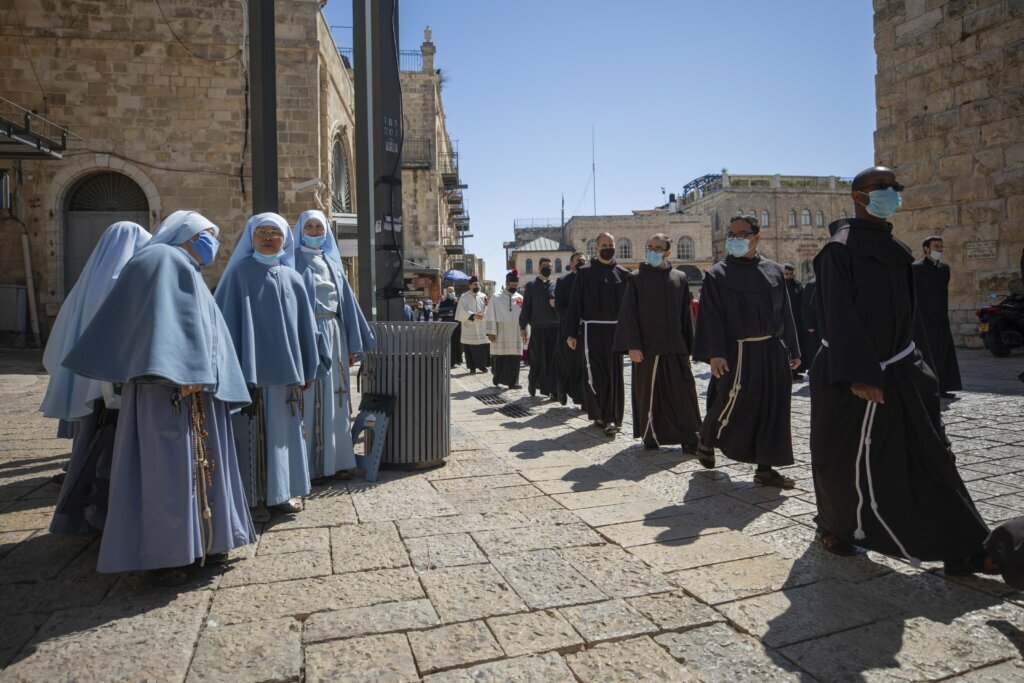 ROME — Priests, nuns and other people living in community settings are among the vaccination priority groups permitted under Italy’s…

ROME — Priests, nuns and other people living in community settings are among the vaccination priority groups permitted under Italy’s revised national rollout. The country’s Piedmont region is going a step further by opening a special vaccine center just for the leaders of religious communities.

Medical personnel at the Cottolengo hospital complex in Turin are set to administer the vaccine to official representatives of Buddhist, Catholic, Jewish, Muslim, as well as Waldensian and other non-Catholic institutions in Piedmont starting Wednesday.

The shots must be given in accordance with the national plan that requires the general population to be vaccinated in descending order of age, beginning with individuals 80 or older or have grave disabilities, then moving down the rollcall to those in their 70s,

LA PAZ, Bolivia — Two nurses in Bolivia are in jail after being accused of stealing 500 COVID-19 vaccines in a small town on the border with Brazil.

Prosecutor Javier Colque requested two months of detention for the women at a hearing Saturday night in the small city of Guayaramerín in the Amazon.

Sealed boxes containing the vaccines were stolen on Thursday from a medical facility in Guayaramerín and were returned the next day by two hooded men who fled, according to authorities. However, Dr. Maicol Borches, coordinator of the city’s health network, said the vaccines won’t be used because they weren’t refrigerated after the theft.

WASHINGTON — Johnson & Johnson is taking over “full responsibility” for a subcontractor’s Baltimore facility that produces the drug substance for its single dose COVID-19 vaccine after an embarrassing mix-up.

The company says it’s adding leaders in operations and quality control to the Emergent BioSolutions plant to supervise the work of its vaccine line.

It comes after enough drug substance for about 15 million doses was contaminated by human error at the plant. The issue was flagged to federal regulators, who have yet to approve any doses from the Baltimore plant, last week.

J&J has delivered about 20 million doses from another plant to the federal government already and says it expects to deliver about 80 million more by the end of May.

DAMASCUS — Scores of Syria’s Christians gathered for prayers in one of Damascus’ largest Churches on Sunday, the second Easter under pandemic restrictions.

Church-goers eschewed masks but maintained their distance in the Our Lady of Damascus Church, many praying for a way out of the economic and political crises in the war-torn country that have become more dire during the pandemic.

Syria is witnessing a sharp increase in confirmed coronavirus cases. Intensive care units in the capital are full, and hospitals prepared for an influx of COVID-19 patients. The country has not yet started a national vaccination campaign.

So far, the war-ravaged country has reported more than 19,000 confirmed cases, including nearly 1,300 deaths. But the numbers are likely much higher given Syria’s battered health care system and sparse testing.

In territories outside of government control, there are about 30,000 infection cases reported in the west and east of the country.

Church celebrations offered a respite from the pandemic, unemployment and inflation.

“We know that outside the country everyone is in a lockdown and closing down. But for us, this celebration is joyous,” Jimmy Babek, a Christian scout at Our Lady of Damascus, said. “We can’t stop everything. We need to be happy.”

The Libyan Health Ministry said 101,250 doses of the Russian-made Sputnik V vaccine landed in the capital, Tripoli and were taken to the ministry’s storehouses on Sunday.

Prime Minister Abdul Hamid Dbeibah said in a tweet that other shipments would arrive, although he didn’t set a timeframe.

Libya has seen a swell in confirmed COVID-19 cases in recent weeks.

The county of around 7 million people has reported more than 161,000 confirmed cases and 2,684 virus-related deaths since the start of the pandemic. However, the actual number of cases in Libya, like elsewhere in the world, is thought to be far higher, in part due to limited testing.

MADRID – Spain is repatriating several hundred of its citizens and residents after Morocco canceled flights with Spain and France to help stem a rise in coronavirus infections.

A ferry departing from Tangier will hold around 750 passengers, according to local media. The Spanish Embassy in Morocco says a flight from Casablanca will carry another 200.

Another ferry is set to leave on Tuesday.

Morocco announced last Monday that it was canceling flights with Spain and France as part of package of measures to fight the pandemic.

LONDON — Britain’s government is planning to trial a coronavirus status certification plan over the coming months to allow the safe return of mass gatherings at places like sports grounds and nightclubs.

Officials are expected to consider passports that show whether a person has received a vaccine, has recently tested negative for the virus, or has immunity due to having tested positive in the previous six months.

The trial events will include soccer’s FA Cup semi-final and final, the World Snooker Championships, and a comedy club show.

Prime Minister Boris Johnson is expected to set out more details on Monday. He said the trials will play an important role in allowing the “reopening of our country so people can return to the events, travel and other things they love as safely as possible.”

However, dozens of Johnson’s Conservative Party lawmakers have opposed the plans, and Johnson could struggle to get Parliament to approve the trials.

PARIS — Some 9,000 people are getting vaccinated at a huge stadium in Lyon during Easter weekend, and thousands more around France are spending the holiday lining up for injections elsewhere as the government tries to speed up vaccinations amid a new virus surge.

But as France faced its second Easter in a row under the cloud of the pandemic, some cities pushed back against President Emmanuel Macron’s insistence that “there are no weekends or days off during vaccination.”

Authorities in Strasbourg on the German border shut down their vaccination facilities Friday through Monday, to allow workers “a little rest at last,” according to a city official. To ensure residents still had access to potentially life-saving vaccines, the city expanded vaccination hours during the week and injected all its weekly supply of doses between Monday and Thursday instead.

The city of Sarcelles north of Paris is among those staying open Sunday, amid mushrooming infections and demand. The surrounding Val d’Oise region now has the highest infection rate in France along with some of its poorest neighborhoods, and Sarcelles’ challenges symbolize inequalities worsened by the virus.

The Easter acceleration efforts stand in contrast to the beginning of France’s vaccine rollout in late December, when low staffing for the end-of-year holidays meant a slow start to injections, which initially focused on nursing homes.

France has reported one of the world’s highest virus death tolls, at 96,280 people, and the highest number of virus infections in Europe.

Yoido Full Gospel Church, the biggest protestant church in South Korea, allowed only about 2,000 church members to attend its Easter service, or about 17% of its main building’s capacity. Masked church members sang hymns, clapped hands and prayed as the service was broadcast online and by Christian TV channels.

Seoul’s Myeongdong Catholic Cathedral, the biggest Catholic church in South Korea, limited Mass attendance to 20% of its capacity and livestreamed the service on YouTube.

Under current physical distancing rules, religious facilities in the greater Seoul area are allowed to have up to 20% of worshippers attend their regular services. Earlier Sunday, South Korea reported 543 new coronavirus cases, taking the country’s total to 105,279 with 1,744 deaths.

LAS VEGAS — Nevada regulators say casinos seeking the state’s OK to raise the current gambling floor occupancy limit above 50% must take steps to encourage their workers to be vaccinated against COVID-19.

The Gaming Control Board and Gaming Commission on Friday issued a memo with guidelines pushing casinos to provide paid time off for employees to be vaccinated, coordinate transportation to vaccine sites and make arrangements with pharmacy companies for vaccine distribution.

The state on March 15 increased maximum gambling floor occupancy to 50% of capacity, up from 25%, and the regulators have been authorized beginning May 1 to approve reopening plans with higher occupancy limits.

The memo said operators’ requests for higher capacity limits “will only be taken in cases where licensees have taken measurable and material steps” to vaccinate their workforce.

The memo said Nevada’s hospitality workforce has a “relatively low degree of vaccination penetration,” though some companies have begun taking steps to encourage employees to be vaccinated.

Effective Monday, Nevada will increase its age-based eligibility for vaccinations to all people age 16 and older.

BEIRUT — Syria’s government says that primary schools will close indefinitely next week amid a severe increase of coronavirus cases.

Universities will suspend classes for only two weeks and high schools will remain open. The announcement by government ministries on Saturday says closures will go into effect Monday. Final exams for grades five up to high school will be held over four days starting April 25.

Syria is experiencing a spike in coronavirus cases, with state media reporting last month the intensive care units in state hospitals in the capital of Damascus were full.

ISLAMABAD — Pakistan federal authorities will start coronavirus vaccinations for residents over 80 on Monday.

The country received 60,000 doses of the CanSino vaccine from China early in the week. Pakistan is already using the Sinopharm vaccine, donated by Beijing last month.

The National Command and Control Center says the vaccine administration will begin in all the four provinces for people over age 80.

Pakistan reported 4,723 new coronavirus cases and 84 confirmed deaths in the last 24 hours. The country is facing a virus surge, which the government says is worse than last year’s outbreak when a nationwide lockdown was imposed.

DHAKA, Bangladesh — Bangladesh authorities are imposing a one-week nationwide lockdown on Monday to curb the spread of the coronavirus.

Cabinet Minister Obaidul Quader announced the plan on Saturday. The government says 5,683 new infections and 58 deaths were recorded in the last 24 hours.

Forhad Hossain, the country’s junior minister for public administration, says organizations providing emergency services will be available during the lockdown. He says industries will remain open and employees must work in shifts, following health guidelines.

The government has already banned travel from all European countries, except the United Kingdom, and 12 other countries for three weeks.

Bangladesh has registered a total of 630,277 cases and 9,213 confirmed deaths. Health experts say the actual number is likely higher.

California woman says she drowned children to protect them