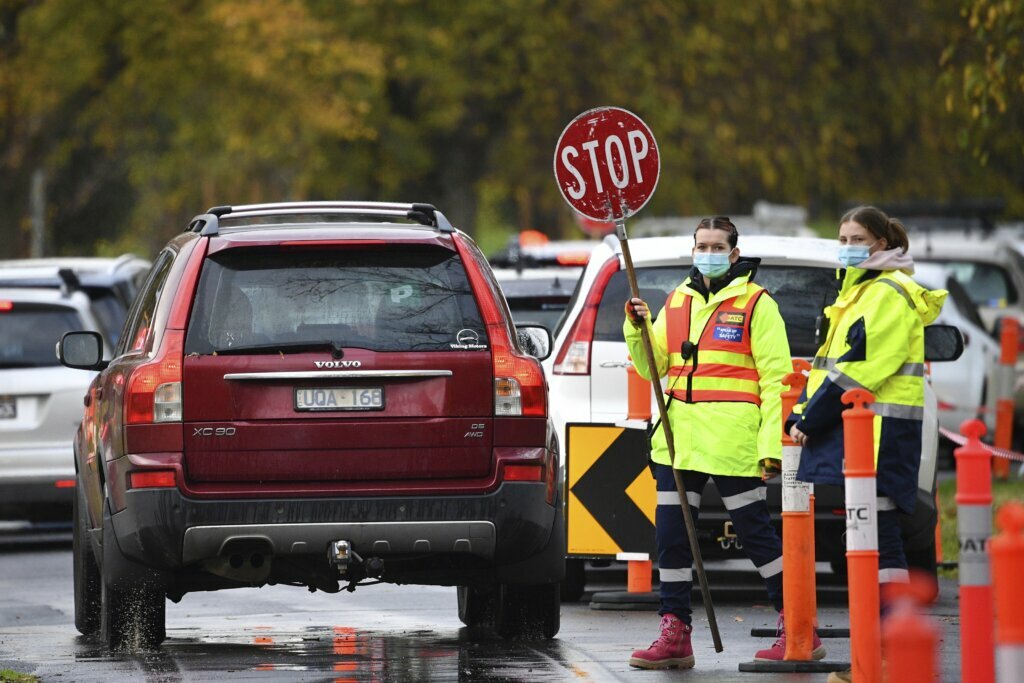 LIMA, Peru — Peru announced a sharp increase in its COVID-19 death toll, saying there have been more than 180,000…

LIMA, Peru — Peru announced a sharp increase in its COVID-19 death toll, saying there have been more than 180,000 fatalities since the pandemic hit the country early last year.

The announcement was made in the presidential palace during the presentation of a report by a working group commissioned to analyze and update the death toll. The results of the study put the new toll at 180,764 in a population of about 32.6 million, compared to recent data indicating that 69,342 people had died from COVID-19.

Health Minister Oscar Ugarte said the criteria for assigning the new coronavirus as a cause of death were changed. Previously, only those who “had a positive diagnostic test” were considered to have died from the virus, but other criteria have since been incorporated.

The new toll from COVID-19 includes deaths reported between March 2020 and May 22 of this year. Among Latin American countries, only Brazil and Mexico have reported higher death tolls from the disease.

On Monday, the coronavirus monitoring site of Johns Hopkins University was reflecting the previous figure of just under 70,000 deaths in Peru. Questions about Peru’s death toll surfaced soon after the beginning of the pandemic.

MORE ON THE VIRUS OUTBREAK:

ANKARA, Turkey — Turkey announced a further easing of its COVID-19 restrictions, including a relaxing of nighttime and weekend curfews, following a decline in the number of infections.

Following a Cabinet meeting, President Recep Tayyip Erdogan said restaurants and cafes — which were only able to open for delivery or take-away food — would be allowed to accept sitting customers until 9 p.m. as of Tuesday. Businesses such as gyms and amusement parks would also be allowed to reopen until 9 p.m.

The start of nighttime curfews was pushed back by an hour, to start at 10 p.m. Erdogan said Sunday curfews are to remain in place but people will be free to leave their houses on Saturdays. Civil servants will continue working remotely or in shifts in offices.

Earlier this month, the number of daily COVID-19 infections dropped to below 10,000 for the first time since March 1, after reaching a record-high of more than 63,000 daily cases in mid-April.

On Monday, the Health Ministry posted 6,933 new cases and 122 deaths in the past 24 hours. The total death toll in the country stands at 47,527 with more than 5.2 million infections.

DETROIT — A large mural honoring a firefighter and other Detroit public employees who died from COVID-19 has been unveiled on the side of a building.

Capt. Franklin Williams of the fire department dominates the painting. But there are images of a bus driver who made an emotional plea for protection from COVID-19 before he caught the virus, and 5-year-old girl Skylar Herbert, who was the daughter of a firefighter and police officer.

“This mural represents community heroes representing those institutions who also fought for our country by putting on a uniform and fighting an unknown enemy: COVID-19,” said Odie Fakhouri, chief operating officer of the Arab American and Chaldean Council, which owns the building on Seven Mile Road.

Williams, 57, was eligible to retire from the fire department but wanted to work until age 60. He died last summer.

The mural, which faces a Detroit fire station, was created by artist Charles “Chazz” Miller with assistance from students at University of Detroit Mercy, the Detroit Free Press reported. It was unveiled Sunday.

FALLON, Nev. — Doctors and nurses are staffing mobile clinics throughout the U.S. to ensure people in tiny towns and far-flung rural areas can get vaccinated.

In Nevada, Arizona, Kentucky and elsewhere, the Federal Emergency Management Agency has dispatched the mobile units to places that lack pharmacies, clinics and other vaccination sites.

Volunteer doctors and nurses in Nevada have teamed up with the National Guard to deliver thousands of shots to communities that state officials say couldn’t offer vaccinations any other way. It’s one of many efforts underway as the nation struggles to reach herd immunity as interest wanes in vaccinations.

BERLIN — German Chancellor Angela Merkel says a rule that allowed the federal government to require strict pandemic measures in regions with high rates of infection can expire at the end of June, as the country has seen a steady decline in COVID-19 cases in recent weeks.

Merkel told reporters in Berlin that the so-called “emergency brake” she pushed through despite resistance from some state governors had “indeed had an effect” in flattening the curve of infections.

Germany’s disease control agency said it received reports of 1,978 new cases of COVID-19 and 36 deaths Sunday. A total of 88,442 people have died as a result of a coronavirus infection in Germany and the country has recorded almost 3.7 million cases since the start of the pandemic.

VATICAN CITY — Pope Francis is praying for an end to the coronavirus pandemic and the economic, social and interpersonal problems it has caused.

Francis presided over a special evening ceremony Monday in the Vatican Gardens that featured recitation of the Rosary, Scripture readings and hymns sung by some 300 people. It was the conclusion of a monthlong prayer marathon that began May 1 with a similar service in St. Peter’s Basilica.

Francis sat before a reproduction of one of his favorite icons of the Madonna, known as Mary Untier of Knots. Those devoted to the icon pray for Mary’s intercession to help resolve their problems.

Opening the service, Francis said there were many “knots tightening around our existence and tying up our activities: they are the knots of egoism, indifference, economic and social knots, knots of violence and war.”

PARIS — France opened up virus vaccinations to adults of all ages starting Monday, earlier than originally scheduled, as vaccine deliveries have picked up speed.

More than 48% of France’s adult population has had at least one dose, and more than 20% have had two, according to public health authorities. After a slow start blamed on bureaucracy and delayed deliveries, France has now administered more than 36 million vaccine doses.

Anyone 18 and over can sign up for an injection. And 12 to 15-year-olds should have access soon too, after the European Medicines Agency authorized use of the Pfizer vaccine for that age group last week. Prime Minister Jean Castex said “the horizon is clearing” but warned be people to stay vigilant.

France has registered more virus infections than any European country, and more than 109,000 deaths linked to COVID-19.

Virus patients still occupy more than half of the intensive care beds France had before the pandemic but their numbers have been falling for weeks and the country is gradually reopening its restaurants, businesses and tourist sites.

LONDON — British health authorities are aiming to vaccinate 15,000 people in one day at London’s Twickenham rugby stadium as part of a race to contain a fast-spreading coronavirus variant.

The strain, first identified in India, accounts for a majority of new cases in the U.K., which is seeing a rise in infections after weeks of decline. Scientists say the variant is more transmissible than even the previously dominant strain first found in the U.K. but current vaccines are effective against it.

Many scientists are urging the Conservative government to delay plans to lift social distancing and other restrictions on June 21, arguing that more people need to be vaccinated before measures can be eased safely. The government will announce its decision on June 14.

Three-quarters of U.K. adults have had one dose of a coronavirus vaccine, and almost half have had both doses.

The Twickenham walk-in vaccination center is offering jabs without an appointment on Monday to people from northwest London, a hotspot for the Indian-identified variant.

Health officials in the northwest England town of Bolton, which had the highest rates of the new variant, say infections are starting to fall after a mass testing and “surge vaccination” campaign.

NEW YORK — Bars and restaurants no longer have to close at midnight across New York state, as its coronavirus curfew for indoor dining ended Monday.

With that, establishments can return to the closing times that their liquor licenses or other regulations allow. A similar pandemic curfew for outdoor dining ended May 17, although some local governments have their own closing-time rules for outdoor tables.

Restaurateurs have been looking forward to the later hours as they try to recover from the shutdowns and other limitations on their business during the virus crisis.

“The lifting of the curfew is critically important,” the NYC Hospitality Alliance’s executive director, Andrew Rigie. “We’re a 24/7 city, so there’s tons of people that would still be out eating and drinking after midnight.”

GENEVA — The head of the World Health Organization has hailed passage of a “historic resolution” by WHO member states that aims to improve preparedness for massive viral outbreaks like COVID-19 and stepped up calls for the passage of an international pandemic treaty.

In the wake of a patchy international response to the coronavirus with WHO at its center, Director-General Tedros Adhanom Ghebreyesus made the comments as the U.N. health agency closed its annual assembly.

Among other things, the assembly — which brings together all WHO member states — passed a $6.1 billion budget for the agency over the next two years. That was a 16% increase from the previous biennial budget.

The assembly also selected the government of Syria — where health care workers and other civilians have been killed, injured and driven from their homes in a decade-long civil war — as a member of the WHO’s executive board.

A resolution offered few concrete steps to tackle pandemics aside from creating a six-person working group to pull together various proposed reforms and report backnext year.

Supporters of the resolution acknowledged it broke little new ground and aimed mostly to garner commonality of purpose amid the economic and human devastation of the pandemic.

BUCHAREST, Romania — Children in Romania between 12 and 15 can start receiving COVID-19 vaccinations on Tuesday, the prime minister says.

The move follows the European Medicines Agency’s approval of the Pfizer vaccine last week for that age group.

“During this pandemic the children have suffered a lot, were isolated, and it was very difficult to explain to them every time why. This is where the idea for this program came from,” Prime Minister Florin Citu said in a government meeting Monday.

Romania has so far administered 7.8 million vaccine doses to its population of more than 19 million, but just 3.6 million have received the necessary two doses. In recent weeks the number of daily vaccine doses has dropped, raising concerns about vaccine hesitancy.

Romania has had 30,000 confirmed coronavirus deaths.

KUALA LUMPUR, Malaysia — Malaysia opened its first mass vaccination center on Monday as the government sought to accelerate inoculations amid a worsening outbreak.

Located in an exhibition center in Kuala Lumpur, the center can vaccinate up to 8,000 people a day. Officials say more such mass centers will be opened nationwide but some critics urged the government to instead set up smaller centers at district levels to improve its outreach.

Malaysia begins a near total lockdown starting Tuesday, the second time in over a year. Most social and economic activities, except for 17 essential sectors, will be shut down for at least two weeks as the government struggles to contain a worsening pandemic.

Daily virus cases hit a record high of 9,020 on Saturday before easing to 6,824 Monday. Malaysia’s total infections have surged to 572,357 while deaths are more than 2,600, both rising five-fold compared to the whole of last year.

Less than 10% of the country’s 33 million people have been vaccinated so far.

Ground broken on next phase of Southeast DC development

Lake Mead levels to drop to lowest capacity since the 1930s

Sen. Cardin: ‘We can and must do better’ on small business investment equity

Heading to the beach? The best times to travel the Bay Bridge over Memorial Day weekend