Tesla reported fourth-quarter results that came in stronger than expected on Wednesday. Shares fell as much as 5% in extended trading on Wednesday after the automaker warned supply chain issues could persist throughout 2022, but later rebounded into slightly positive territory.

Here’s how the company performed:

Revenue rose 65% year over year in the quarter, while automotive revenue totaled $15.97 billion, up 71%, according to a statement.

Energy generation and storage revenue was $688 million, which was down 8% and below the StreetAccount consensus of $815.1 million. It was the lowest revenue for that division since the first quarter of 2021.

“Our own factories have been running below capacity for several quarters as supply chain became the main limiting factor, which is likely to continue through 2022,” the company said.

Musk said on the company’s earnings call Wednesday that he expects Tesla to remain “chip-limited” in 2022, and said the company would introduce no new vehicle models this year as a result.

“We will not be introducing new vehicle models this year. We will still be parts constrained.” He said the company would instead work on engineering and tooling to create those future vehicles.

Shareholders had been waiting for progress updates on the company’s long-delayed heavy duty Semi truck and experimental Cybertruck pickup.

He also said the company is not currently working on a $25,000 compact electric vehicle, contrary to the ambitions he announced at a Tesla Battery Day presentation in 2020.

CEO Elon Musk alluded to the supply chain issues in a tweet Last November, writing, “Oh man, this year has been such a supply chain nightmare & it’s not over! I will provide an updated product roadmap on next earnings call.”

In its shareholder deck, Tesla revealed that it has expanded its experimental driver assistance systems testing program, dubbed FSD Beta, to around 60,000 users in the U.S.

The California DMV and federal vehicle safety regulators at NHTSA are both investigating Tesla’s approach to testing new, and unfinished driver assistance features with customers on public roads in the US.

“Full Self-Driving (FSD) software remains one of our primary areas of focus,” the company wrote. “Over time, our software-related profit should accelerate our overall profitability.”

In its shareholder deck, Tesla also confirmed that Model Y builds began at the new Austin, Texas, plant in late 2021. It will start deliveries from that factory following a certification process.

Correction: An earlier version of this post misstated Tesla’s automotive revenue for the quarter. It was $15.97 billion. 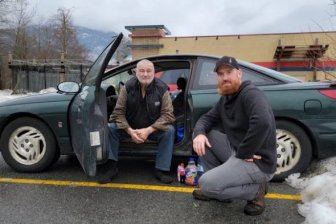