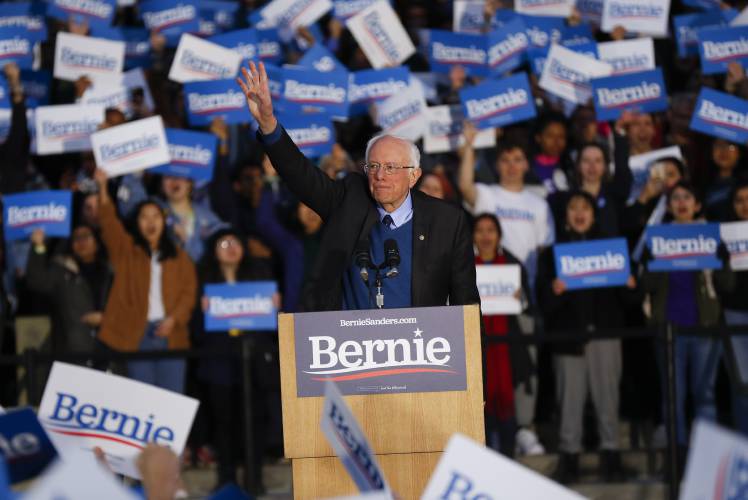 Bernie Sanders proved the seriousness of his presidential bid in 2016 with an upset victory in Michigan powered by his opposition to free trade and appeal among working-class voters. Four years later, the same state could either revive the Vermont senator’s campaign or relegate him to the role of protest candidate.

Michigan and five other states hold presidential contests on Tuesday at a critical point in the Democratic race.

Former Vice President Joe Biden is looking to cement his front-runner status after winning the most delegates during Super Tuesday last week. He’ll campaign later Monday in Detroit with former presidential rivals Kamala Harris and Cory Booker, who have endorsed Biden in recent days as part of a broader consolidation of support among party leaders.

Sanders is in an urgent fight to turn things around as the primary calendar quickly shifts to other states in the coming weeks that could favor Biden and narrow his path to the nomination. He countered the parade of Democratic firepower lining up behind Biden by securing the endorsement of the Rev. Jesse Jackson.

Tuesday marks the first time voters will weigh in on the Democratic contest since it effectively narrowed to a two-person race between Sanders and Biden. It will be another test of whether Sanders can broaden his appeal among African Americans. Biden, meanwhile, must show that he can keep momentum going after his surprise Super Tuesday turnaround.

“I like his chances,” Michigan Gov. Gretchen Whitmer, who has endorsed Biden, said of the former vice president in a phone interview Monday.

“He knows Michigan,” Whitmer said. “When our back was up against the wall during the auto struggles of the past, it was Barack Obama and Joe Biden who had our backs. Others were saying, ‘Let Detroit go bankrupt.’ ”

That’s a reference to the Obama administration overseeing federal bailouts that helped the auto industry – the lifeblood of Michigan’s economy – weather the 2009 financial crisis. Sanders counters that he, too, voted to save the auto industry. He also says that, unlike Biden, he opposed the North American Free Trade Agreement, which he said prompted thousands of Michigan jobs to move to Mexico since taking effect in 1994.

Appearing Monday with Booker at a campaign stop in Flint, Mich., a community that has seen auto industry jobs disappear, Biden ticked off the names of six former presidential rivals who have endorsed him just in the past week: “They’ve all come out and endorsed at one time … the candidate that they think can win.”

“I want to say to all of them and their supporters, I know how hard this is, but the message is simple: We want you, we need you, there’s a place in our campaign for you,” Biden said.

An outstanding question going into Tuesday is whether Massachusetts Sen. Elizabeth Warren, who dropped out of the race last week, will endorse Biden or Sanders. So far, she’s declined to back either, an especially frustrating development for Sanders, who could use Warren’s help in unifying progressives in much the same way Biden has been able to rally moderates.

Sanders has scoffed at suggestions he could drop out if he doesn’t win Michigan, but his travel schedule underscores its importance. He canceled a trip to Mississippi and instead made five campaign stops across Michigan since Friday. And he was holding a roundtable in Detroit on Monday with health experts to discuss the spread of the new coronavirus.

Sanders has accused Biden of relying on billionaires to finance his campaign but also says he’s now running against “the Democratic establishment.” The senator told Fox on Sunday that he’d win Michigan and repeated that at a rally in Grand Rapids, but added the major caveat for supporters that he’d only pull it off “if we stick together, we bring our friends out to vote.”

Sanders won’t say if he’s personally lobbying Warren for her endorsement. He did manage to secure the backing of Jackson, who said it was no time for centrist compromise.

“With the exception of Native Americans, African Americans are the people who are most behind socially and economically in the United States and our needs are not moderate,” Jackson said at Sanders’ Grand Rapids rally. “A people far behind cannot catch up choosing the most moderate path.”

Still, one of Sanders’ highest-profile supporters, New York Rep. Alexandria Ocasio-Cortez, struck a far more conciliatory tone addressing 10,000-plus on the campus of the University of Michigan on Sunday night, saying, “In order for us to win, we have to grow.”

“We must be inclusive. We must bring more people into this movement,” she said, urging Sanders supporters to shed “cynicism and exclusion” and “turn with an embracing posture, where all people are welcome in a people’s movement.”

Sanders is hoping to do well in Washington state on Tuesday, but could face hurdles in Mississippi and Missouri. Sanders’ team acknowledges he will also struggle in next week’s Florida primary, where the senator’s past defense of Fidel Castro looms large. He also could face long odds in Ohio and Illinois – especially if he underperforms in Michigan. Both of those states also vote March 17.

The wild card next week could be Arizona, where Sanders will be counting on strong Latino support, which lifted him to victory in California.

The intricate arithmetic of how delegates are won makes it possible Tuesday for a winning candidate to reap a bigger haul of delegates with a smaller margin of victory than any other night. This gives Biden an opportunity to greatly increase his lead over Sanders or for Sanders to close the gap.

Delegates are awarded proportionally mostly in congressional districts. And nearly two-thirds of Tuesday districts have odd amounts of delegates up for grabs.

Still, Sanders advisers are aware that trading a few big wins for Biden’s running up the score elsewhere eventually gives the former vice president an insurmountable delegate lead as the race rolls on. They are hoping to continue to do well in the West and then pick up momentum of their own in places like New York, which holds its primary next month.

There’s no guarantee Sanders could last that long this time, however, given the higher expectations he now faces. Even some of those attending Sanders rallies are beginning to feel it.

“I think last time in 2016, it felt more spontaneous. Now I think his support has hardened,” said Nathan Brunner, a 34-year-old sales and marketing professional from Grand Rapids who attended Sanders’ rally there on Sunday, voted for the senator in the 2016 primary and plans to vote for him again on Tuesday. “I think a lot of his supporters came into the election last time not knowing what to expect. Last time it was more like, ‘Hey, we’re happy to be here. Oh, look how well we’re doing.’ Now he has expectations.”