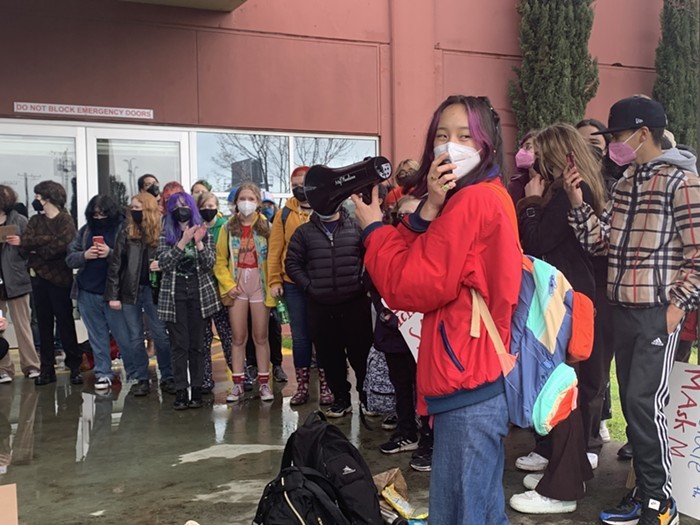 In the latest COVID-19 related walkout, students from Cleveland protest the district’s firing of their principal, who didn’t stay quiet about contract tracing HK

ONE SEATTLE, MOTHERFUCKERS! Tomorrow is Mayor Bruce Harrell’s inaugural One Seattle Day of Service. It’s a big one, with 127 events throughout the city and over 4,000 volunteers signed up to clean, garden, and whatever it is the City doesn’t want to pay people to do. Okay, okay, that was a little sassy, I’m sorry. I’m sure that this will be a very unifying experience. Plus, you can technically get paid a little bit in like an indentured servant kind of way. If you owe Seattle Municipal Court money, you can apply to waive up to $50 for an hour of work.

Goodbye graffiti: Harrell has made it clear that he is not a fan of graffiti – everyone’s an art critic, jeez. So, no doubt volunteers will roll up their selves and paint some gray blobs over tags across the city. Jas Keimig took a deep dive into the graffiti culture war for your reading pleasure before you volunteer this weekend.

Winter eviction: In the City Council’s Renter’s Rights and Sustainability committee meeting today, the committee looked at changes to the winter eviction ban after the Court of Appeals ruled the defense violates “constitutional procedural due process guarantees” because the defense doesn’t give landlords the chance to determine if a tenant is REALLY experiencing financial hardship. The City appealed, but, just in case, the committee wants to find a way to keep the defense regardless.

We hate pedestrians so much. I am sickened:

“Kravchenko was not charged for Nguyen’s killing, but for fleeing the scene instead of staying.” https://t.co/jvGBYGz5yM
— Ryan Packer (@typewriteralley) May 20, 2022

On that note: As Charles said in last night’s Slog PM, the light rail hit a pedestrian in Othello, you know, the largely POC neighborhood where Sound Transit built the train above ground. According to the Seattle Times, this is the Link’s sixth collision of 2022, the year’s first involving a pedestrian along Sound Transit’s 1 Line. Usually the train barrels through a car or person about once a month. I asked Harborview if the victim is okay. I’ll update if they respond.

Fuck schools, I swear to God: More than 100 students at Cleveland High School walked out this morning to protest the district firing the school’s principal. In a letter to the Cleveland community, the principal said she lost her position after 18 years at the school because she let it slip that the district stopped contract tracing.

But also fund schools, holy shit: Marysville School District laid off 35 teachers to accommodate voters’ choice to cut its budget by $13.5 million. Not to be an education reporter, but HOLY SHIT DO NOT REJECT LEVIES. THIS IS WHAT HAPPENS!

Goth store, goth store, goth store: A wise woman on TikTok once said for every “slay” there exists and equal and opposite “slay” i.e. the Princess Bubblegum Marceline Theorum. Anyway, now that goth shop The Cramp will return to Broadway, I will be scouting for my equal and opposite “slay.” I have pink flowers on my nails, and I paint my furniture to look like Animal Crossing. I deserve goth friends.

“He lived and died for the University of Washington:” Jim Lambright, a legendary UW football coach, donated his brain to UW Med after he died. Researchers examined his brain and this is what they learned about chronic traumatic encephalopathy, dementia, and Alzheimer’s.

Can NO ONE use the parks anymore?? In an incredibly dweeby move, Seattle Parks and Recreation reduced hours at Golden Gardens and Alki. The Seattle Times reported that Parks and Rec and the cops will start kicking people out at 9:30 pm to address “dangerous and/or illegal behavior that has been typical of summer evenings.” Bro, I can do coke on the beach at 9:15 pm, I can start a fist fight any time after dinner, I can do crime at all times of the day. Kicking people out before sunset does not seem like the solution to danger.

ICYMI Part 1: The New York Post shared a video of a cop tasing a Florida Biker, which set him on fire and “cooked” him alive.

ICYMI Part 2: The Oklahoma State Legislature passed the strictest abortion ban in the country. According to the AP, providers said they would stop performing the procedure as soon as the governor signs the bill, the latest in a long line of anti-choice legislation from Oklahoma and other red states.

Congrats, AOC: Word is out that Congresswoman Alexandria Ocasio Cortez got engaged to her long-term partner, a finance bro she met in college, last month in her hometown in Puerto Rico. I hope she wears the Tax The Rich dress to the wedding.

Doing anything this weekend? Rich wants you to go see a performance at On the Boards by Dana Michel called CUTLASS SPRING. Take it away, Rich.

Thanks, Hannah! Yes, CUTLASS SPRING, which runs through May 22 (tickets here), is an hour-long dream about everyone’s favorite constructions: Gender, America, Race, Adulthood. And when I say “dream,” I don’t mean gauzy woo-woo amorphous stuff. I mean a real dream. A lucid dream. A dream with all the absurdity, humor, terror, profundity, symbolism, and — most importantly — genuine surprise of an actual dream.

In the dream, Michel moves around the stage like a toddler on a tear, half naked, determined, busting up domestic objects left and right — white plastic lawn chairs, white linoleum, white phones, and white hot plates. As she roams the room, she starts and abandons little chains of movements and sounds — hissing morphs into clicking that morphs into beat-boxing. She tries on a dress — it doesn’t last long. She tries on a leather suit with a cartoonishly foam cowboy hat — it doesn’t last long. Nothing fits. Nothing sticks. And yet she’s stuck under these big bright white lights cut with red and blue lights. Until, well, never mind. You kinda have to be there to get it. So go! (But if you do, be prepared to sit on a mat on a riser. The show is intimate and in the round.)

Thanks for the art talk, Rich! Now, how about some ‘Arry fooking Styles: Did you read that in British? Email me if you did. Anyway, Harry Styles released his long-awaited third solo album. He is dressed like me as a toddler on the cover! I don’t know anything about music by men (didn’t listen to male artists all through high school, so I lost some years), but here’s a little review from Pitchfork, and of course, the album’s obligatory fruit-named track. His self-titled album had “Kiwi,” Fine Line had “Watermelon Sugar” and “Cherry,” and now Styles presents “Grapejuice.” 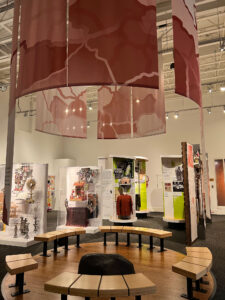 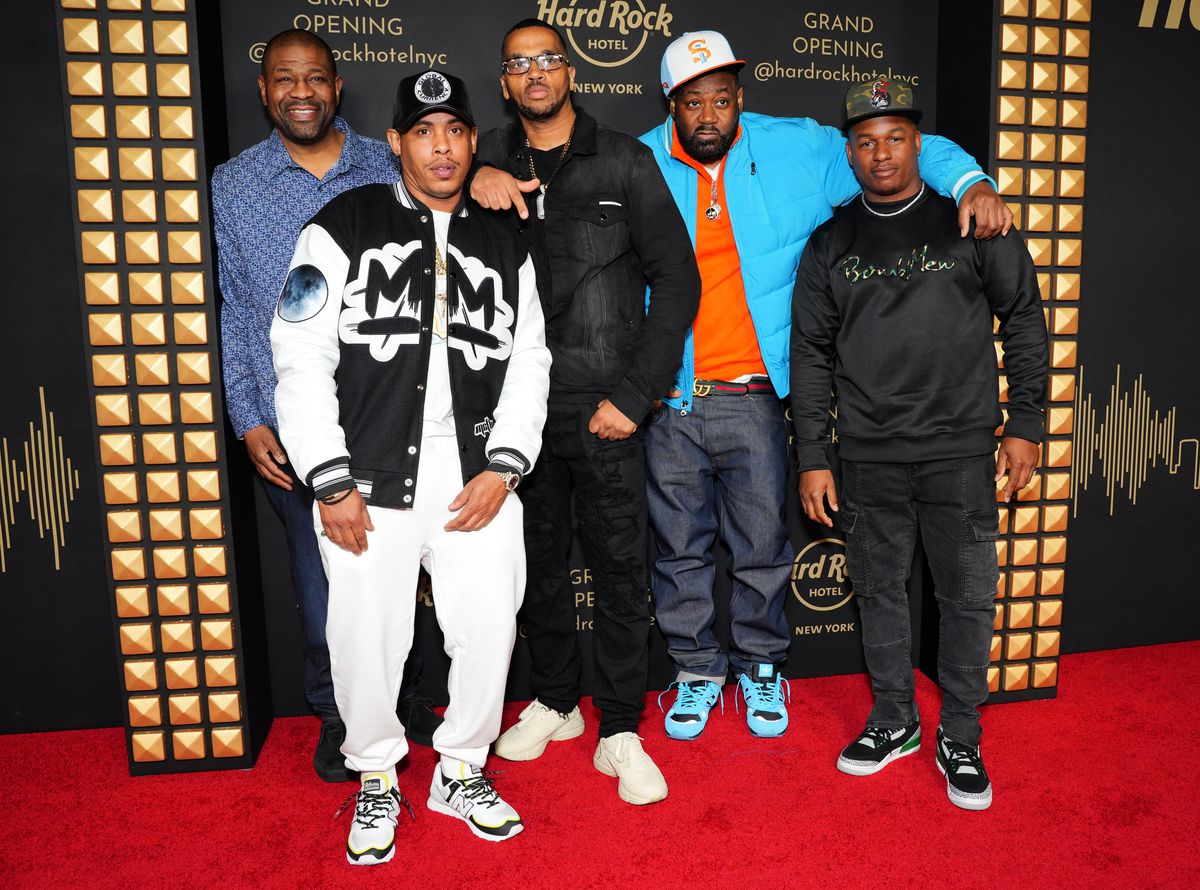 The Best Food At Pike Place Market in Seattle