San Luis Obispo Repertory Theatre’s Every Brilliant Thing, scheduled to premiere on May 12, is a one-person theatrical experience like no other, according to actor Kevin Harris. Harris, the play’s narrator, will enlist audience members to play key roles in the production dealing with topics of suicide, depression, loss, and hope.

To allow for audience participation, the 100-seat theatre will be reconfigured to permit everyone equal access to the actor.

The play is a partnership between SLO Rep and Transitions-Mental Health Association (TMHA) and was originally written by Duncan MacMillan with Jonny Donahoe. The narrative is told from the perspective of a 7-year-old boy whose mother has just tried to kill herself. In an effort to keep her from doing it again, the boy creates a list of every brilliant thing he can think of living for and leaves it on his mother’s pillow. The first item on the list is ice cream, and throughout the boy’s life, the list grows as he and others add to it.

Harris, who’s also SLO Rep’s managing artist director, first heard about Every Brilliant Thing from an actor he’d previously worked with. The format and subject matter drew him in. On a personal level, Harris said it’s a reminder of his own past struggle with depression.

“Mental health wise, I lived a charmed life, until I didn’t,” he said. “It all went haywire.

“I sent up red flags,” Harris said of being put on a 72-hour involuntary mental health evaluation hold. “I was dealing with post-divorce depression.”

Harris said that he was raised in a “family based on avoidance,” in which people didn’t talk about important things. The actor is trying to break that familial cycle by finding ways to talk about issues with his own children, he said.

This universality is a large part of Every Brilliant Thing‘s power, Newman explained. 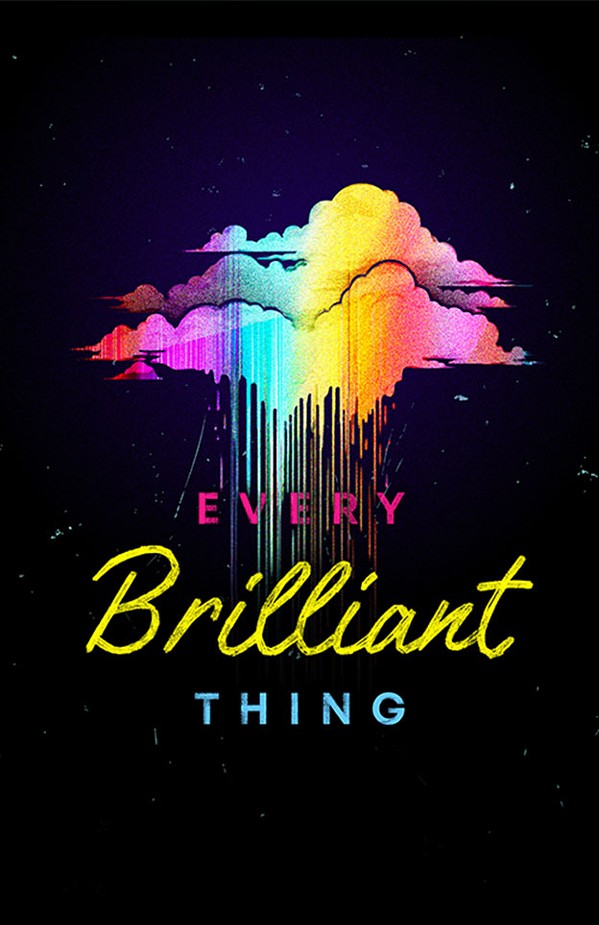 “I don’t think there will be anyone who doesn’t relate to this play,” she said.

Statistics bear this out. According to TMHA, a local nonprofit that provides services to residents living with mental illness, 1 in 5 people experience mental health challenges in their lifetime.

“It gets to the heart of what we do,” Michael Kaplan, community engagement director at TMHA, said of Every Brilliant Thing. “It provokes conversation about mental wellness. This is a wonderful production people will talk about.”

During a March 10 rehearsal performance of the play at SLO Rep, Harris delivers passion, emotion, and energy. He interacts with those who have agreed to run lines with him, like Kaplan, Jo Jackson, and Lisa Langere.

Jackson, who is very active with SLO Rep and volunteers with the theater, is playing different parts during the rehearsal, including Sam, the narrator’s girlfriend. Langere, who paints the scenes for the theatre, is playing Mrs. Patterson, a counselor/teacher who uses a sock puppet named Scooby to communicate with the boy.

Though the play deals with heavy themes, the production is made lighter with music and humorous moments throughout its 70-minute runtime. Rehearsal passes quickly with lots of laughter, some tears, and moments of reflection—emotions and experiences that most audience members of Every Brilliant Thing will likely have.

At the conclusion of each show, following a brief intermission, the cast plans to return to the stage for an optional talkback session. Cast members and mental health experts from TMHA will be on hand, and audience members will be encouraged to stay to discuss the play, ask questions, or share their thoughts.

Like every good piece of theater, Newman said, Every Brilliant Thing will spur conversations that hopefully continue after the lights go down.

“The heart of what theater does,” she said, “is get to the heart of us.” Δ

ROBERT PRICE: Mayf Nutter has a story about that | Columnists

Carbajal leads forum to discuss local agriculture during pandemic and beyond