In the early 90s, the now bustling City Market was a new and bold idea. 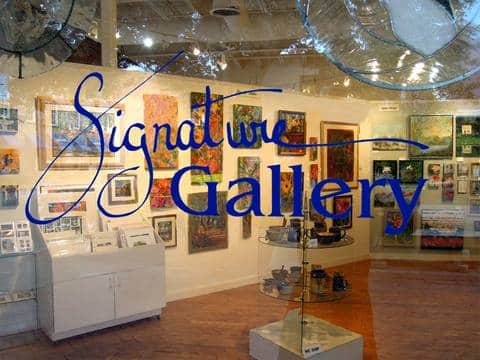 It was a section of the city cradled by some of Savannah’s most historically significant neighborhoods, but years of disrepair had led to deserted streets, boarded up buildings and broken windows — a classic example of urban blight. Its potential, however, was undeniable, and all it needed was some love and care, plus a few visionaries who were willing to put in the work. Fortunately, Savannah artists Kathy Miller, Sharon Saseen and Mark McKim were ready to take the plunge with the Signature Gallery. When offered the opportunity to convert an old storage facility to a fine arts gallery, if they could find the right architect for the job, they jumped.

“Fortunately,” says Kathy, “we did know an architect!”

Kathy’s son, Tim, was already working in architecture and design in New York and envisioned the gaping, industrial space as a homage to the Greenwich Village aesthetic. The end result was an elegant and soaring space hemmed in with natural wood that reflected the light of the sun. The three artists brought together seven like-minded souls, and an artists’ collective was born in the heart of Old Savannah. “We were beyond exhilarated,” Kathy says, “and there was a camaraderie among us that we had not experienced before.”

Since then, the collective has grown from seven artists to fourteen, and it’s very much “a democracy,” says Sharon. “We’re all partners; we share in the duties of running the gallery, and artists love to jump in and help out.” It’s also a family, with Kathy and Sharon serving as its two matriarchs. Both longtime Savannahians and well-known local artists, they each found joy, solace, wonder and acclaim in their art. Kathy has lived in and visited some of the world’s most beautiful places. Her path to becoming an artist began on the white sands of Midway Island. As she stared up at the skies, she learned to really see the spectrum of colors in the sky and the ocean, “how they were reflections of each other.” Sharon’s family came to Savannah in 1897. “My lifetime saw the restoration of Savannah’s parks and original architecture,” she says. “I knew Savannah would be on the map eventually and I’m so proud to be alive in this particular era of its history.”

With the gallery in such capable hands, Signature’s artists have the time and space they need to work, and then greet customers and talk art with visitors.

“I’m so grateful for the artists who wanted to be a part of this. It’s the only way we could do what we love to do!” says Sharon. Another member of the Signature family, Elizabeth Slocum, is grateful for Kathy and Sharon above all. “These are two of the most dynamic women I have ever met,” she enthuses. “They have contributed so much to Savannah’s artists-supporting-artists community.”

More than any challenge that came in the previous three decades, the pandemic tested the strength of Signature’s bonds.

But as this group has always done, they pulled together, using the time the gallery remained closed to pool their creative efforts into a hands-on remodel of the space. “It gave us all a lot of hope,” says Elizabeth with a smile. “And we are just as excited today about Signature as we were at the very beginning,” adds Kathy. Sharon nods in agreement. “When you get to do what you’re supposed to do, the time goes by in a blink.”

Signature Gallery features original local and regional work. Its artists walk visitors through the processes, techniques and inspirations of all the work on display. Open seven days a week from 10 a.m.-6 p.m.

Mayor Bottoms Not Up for Reelection

OutKast, Missy Elliott, James Brown among the inaugural inductees into the Black Music and Entertainment Walk of Fame

Mayor Bottoms Not Up for Reelection