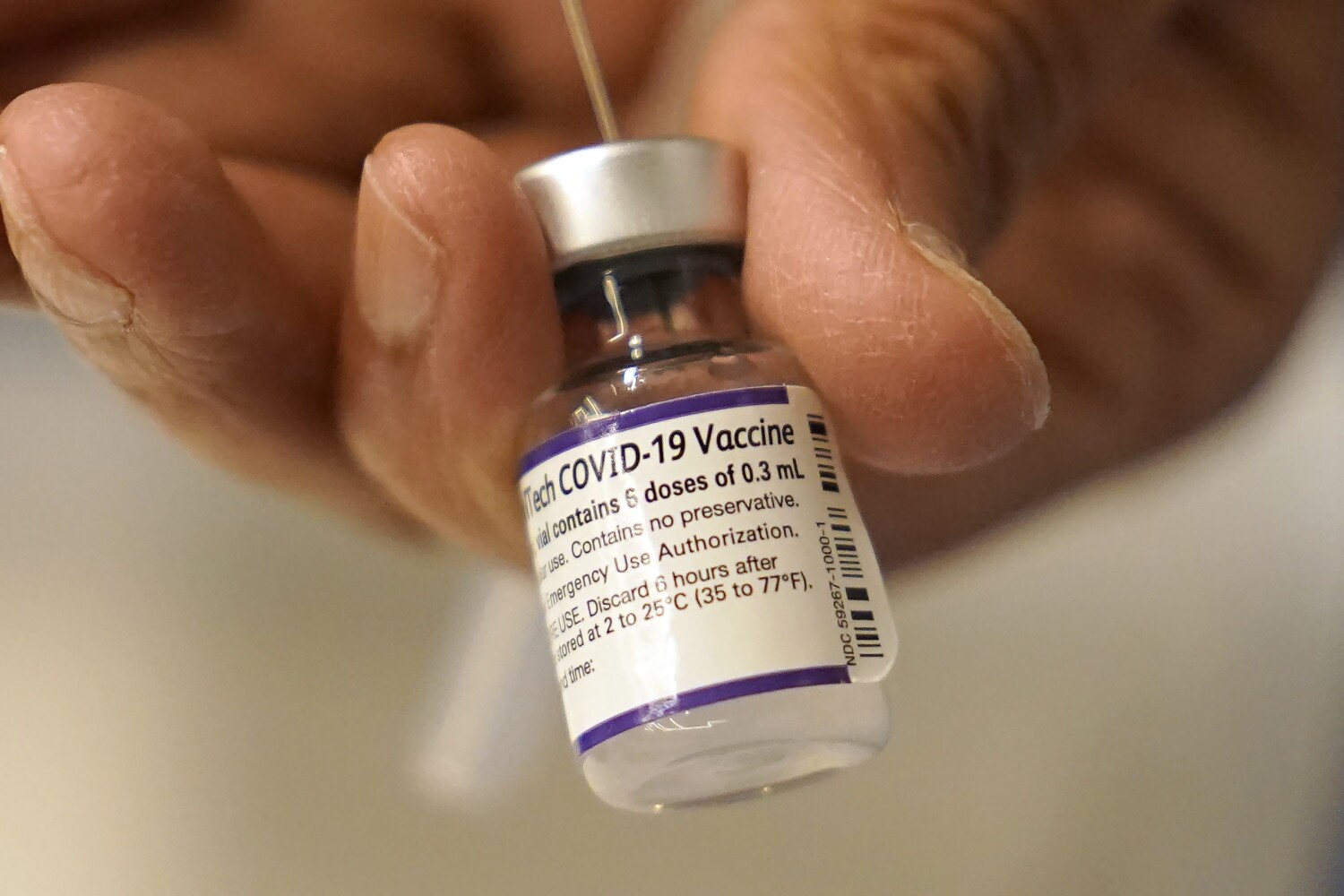 So you took the first COVID-19 vaccine that was offered to you and — if it was one of the two mRNA vaccines available in the U.S. — you went back on schedule to get the second jab. When the Centers for Disease Control and Prevention recommended a booster shot, you got that without delay, too.

Now, the Food and Drug Administration has authorized a second booster for people 50 and older, and for anyone younger than 50 whose immune system is very impaired by disease or medications.

The FDA’s move led the CDC this week to update its COVID-19 vaccination recommendations. But the agency’s language doesn’t actually recommend the booster for all those newly eligible. Instead, the CDC’s updated COVID-19 vaccine recommendations allow certain immunocompromised individuals 5 and older and anyone 50 and older to get a second booster of mRNA vaccine if they got their first booster at least four months ago.

That parsing of language might make you ask: So, should I get another booster?

Let’s get to that and other questions.

Wait, I know someone who’s already gotten a second booster.

An actual recommendation for a second booster shot had already been made for some people. The FDA and the Centers for Disease Control and Prevention have already authorized and recommended a fourth dose of mRNA vaccine for Americans 12 and older whose immune systems are moderately to severely impaired by disease or medication.

The CDC has offered some examples of people with likely immune impairment who qualify for a second booster shot. The list includes people in active cancer treatment, those who have had a stem cell transplant or solid organ transplant and are getting immune-suppressing drugs to prevent rejection, people with advanced or untreated HIV or those with immunodeficiencies such as DiGeorge syndrome or Wiskott-Aldrich syndrome, and people who take high-dose corticosteroids.

But many worried-but-well Americans have already used that narrow opening as the go-ahead to get a second booster. And, as has happened throughout the pandemic, they can generally find someone to give it to them.

But I keep hearing that protection from my booster shot has waned, and that another booster will restore my coronavirus-fighting antibodies to the level they were at right after I was “fully vaccinated.”

That’s undoubtedly true but not necessarily the best measure of how protected you are.

Both Moderna and Pfizer-BioNTech submitted evidence to the FDA that clinical trial participants’ neutralizing antibody levels rose significantly in response to a second booster shot. That is an effect that researchers now predict will probably be temporary.

But a bump in neutralizing antibody numbers is neither as surprising nor as heartening as you might think. And research has shown that the waning of their numbers after a month or two is not exactly the disaster you might assume either.

That’s because the initial course of vaccination (whether you define it as two shots of mRNA vaccine or three) should have already produced enough antibodies to teach your immune system roughly what the novel coronavirus looks like. That prepares a more durable second line of immune defense — called cellular immunity — to field a fresh army of antibodies next time the virus that causes COVID-19 threatens to invade.

In people whose immune systems are sluggish, including those on immune-suppressing medications and those over 60, it can take a couple of tries to build up antibodies to the point where this long-lasting memory B- and T-cell immunity is established.

So if I’ve got that immunity, I’m protected, right?

There’s reason to believe that while waning antibody levels may be allowing “breakthrough infections,” this long-lasting memory B- and T-cell immunity is helping to protect vaccinated people from becoming very ill if they get infected.

I’m in my fifties but wouldn’t call myself immunocompromised. Is the CDC suggesting I need to get a booster to be protected now?

The conditions under which someone’s immune system might be considered sluggish differ from person to person and across the age span. On average, immune response declines after 60. But there, too, the immune function of 100 different seniors will range widely. Having other medical conditions, such as obesity or diabetes, might bog down a 50-year-old’s immune system, making it as cranky as that of a 70-year-old.

People who take a single medication to treat an autoimmune disease such as Crohn’s disease or rheumatoid arthritis are a bit less immune than otherwise healthy people. But they do not have the same level of immune impairment as, say, transplant patients, who can be on three or more powerful immunosuppressants.

In short, the line between who might get a second booster and who definitely should get one is “a little bit wonky,” said Dr. Otto Yang, associate chief of infectious diseases at UCLA.

It was with these variations in mind that the FDA adopted what experts call a “permissive” emergency use authorization — essentially one that errs on the side of making a product available to more people than may actually need it.

But there’s also some real-world evidence that a second booster is useful right?

Yes, some. Israel has given the United States its best look-ahead at what might be expected. It offered mRNA vaccine exclusively to its citizens for the first two doses, and then boosted its population not once but twice. Israel’s national healthcare system and its cadre of well-trained researchers — plus the fact that it has made its boosting decisions well ahead of the U.S. — have provided some of the most rigorous findings on the effects of additional shots of vaccine in various age groups.

Alas, the Israeli findings on the value of a second booster have not been entirely consistent.

A preliminary study of Israeli medical records showed that, compared with people 60 and older who had gotten a single booster shot of mRNA vaccine, those who got a second booster were 73% less likely to develop severe COVID-19 if they were infected.

That “considerable additional protection” held up steadily over nine weeks of follow-up, though there’s evidence that the effect of a fourth shot will fade even more quickly than the protective effect of third shots.

And there was one more important caveat here: Whether they had three or four shots of vaccine, fewer than 1% of infected Israelis were becoming severely ill when infected during the Omicron variant surge. That means Booster No. 1 continued to do a good job of protecting against the outcomes we should most fear — either death or COVID-19 illness so severe that a patient must be hospitalized and treated in the intensive care unit.

Other Israeli research, focused on a younger and healthier population of healthcare workers, offers a much more tepid endorsement of a second booster.

This study was published in the New England Journal of Medicine. It found that doctors and nurses who got a second booster shot were 43% less likely to develop symptoms of COVID-19 than were those who had been boosted just once. But whether they got one or two boosters, infected healthcare workers reported “negligible symptoms,” so the net benefit was tiny.

What’s been the effect of additional doses in the United States?

In a “Mortality & Morbidity Weekly Report” dispatch issued last week, the CDC found that people who had gotten two or three doses of an mRNA COVID-19 vaccine were 90% less likely than their unvaccinated or incompletely vaccinated peers to die or require mechanical ventilation because of COVID-19. The study reflects a 10-month period when the Omicron variant was dominant in the U.S.

So “fully vaccinated” status continued to confer a high level of protection. And people who’d had their first booster of mRNA vaccine fared a bit better still: They had 94% protection against those worst-case outcomes.

But if I’m over 50, shouldn’t I just get it? Is there any safety issue or major downside to doing so?

Yang urges people interested in a booster to discuss it with their doctor. But his default position is that “anyone that’s qualified should just go ahead and get it.” He argues that while there are some pesky side effects to boosters, “they’re extremely well tolerated and they are extremely safe.”

“Realistically, if people are concerned that because of the treatments they are on, they are immunosuppressed, it’s probably reasonable to get another dose,” Kotton said. “I don’t have concerns about significant risk from boosters.”

Not all experts are so gung-ho, however. Asked whether it makes sense for most vaccinated-and-boosted people 50 and older to get a second booster shot, Dr. Paul Offit, an infectious disease expert at Children’s Hospital of Philadelphia, said bluntly, “No it doesn’t.”

Offit has urged officials to use resources such as booster shots to drive down severe disease, and not just to reduce new infections.

Should I just forgo the second booster and wait for a vaccine that’s specifically tailored to protect against whatever variant of the coronavirus is still out there?

There’s no reason to think a second booster shot would make any subsequent vaccine less effective, or that your immune system gets worn down by repeated updates. But there are plenty of experts suggesting scientists should be using this reprieve from crisis to explore vaccine options that could improve on existing vaccines in conferring reliable and durable immunity to COVID-19.

“The time has come for us to think about other platforms and other options, and whether these might better capture” the variants circulating now and likely to emerge in the future, said Dr. James E.K. Hildreth, president and CEO of Meharry Medical College in Nashville, Tenn. “The mRNA vaccines were fantastic for when we needed them. But I think we need some additional options now,” including vaccines of different designs and vaccines specifically tailored to the Omicron subvariant called BA.2.

“I’m all for giving the boosters,” said Hildreth, an infectious disease physician who advises both the CDC and FDA on vaccines. “But let’s also think about whether steps need to be taken” to provide broad protection that will stand the test of time, he said.