The 2022 Ford F-150 Lightning is Ford’s first electric truck and has features not found on any other F-Series model. Fox News Autos Editor Gary Gastelu takes it for a spin.

The Ford F-150 Lightning is aimed at reducing fuel consumption, but it turns out the electric pickup can consume itself.

One of the F-150 Lightning’s standout features is its bi-directional charging capability, which allows the battery pack to be used as an energy source for other electrical equipment.

That includes power tools, radios, entire homes during blackouts and even other electric vehicles. Not just other vehicles, in fact.

Shortly after its launch in May, several testers decided to see what happens if you plug the F-150 Lightning’s charging cable into its own 240-volt outlet in the bed, which is powered by a 7.2-kilowatt inverter on top models. It turns out the vehicle starts charging itself, but not in a useful way.

Car and Driver put the method to a more extensive evaluation and calculated that the conversion of electricity from DC to AC and back to DC results in a 12% waste of energy, but the process could technically continue for about 150 hours. That is if the system didn’t shut itself off before that, which it will when the battery reaches a low level of charge.

Like a snake eating its tail, there’s really no point to taking advantage of this technical loophole, but you can add it to the list of things the F-150 Lightning can do that the other F-150s can’t.

The F-150 Lightning is actually capable of charging itself, however, through a regenerative braking system that turns the electric motors into generators to slow the vehicle down and recapture the energy used to do that. 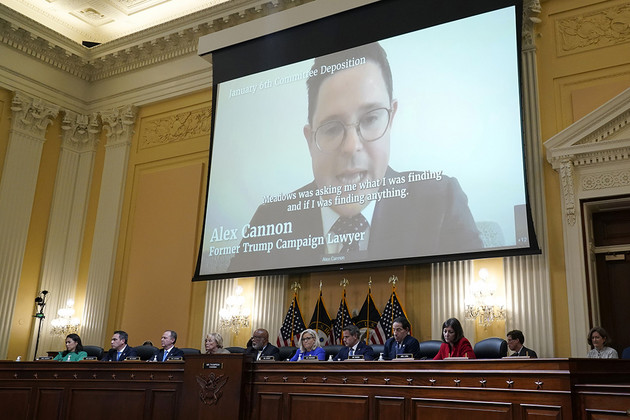 Jan. 6 panel lets Trump allies narrate the case against him