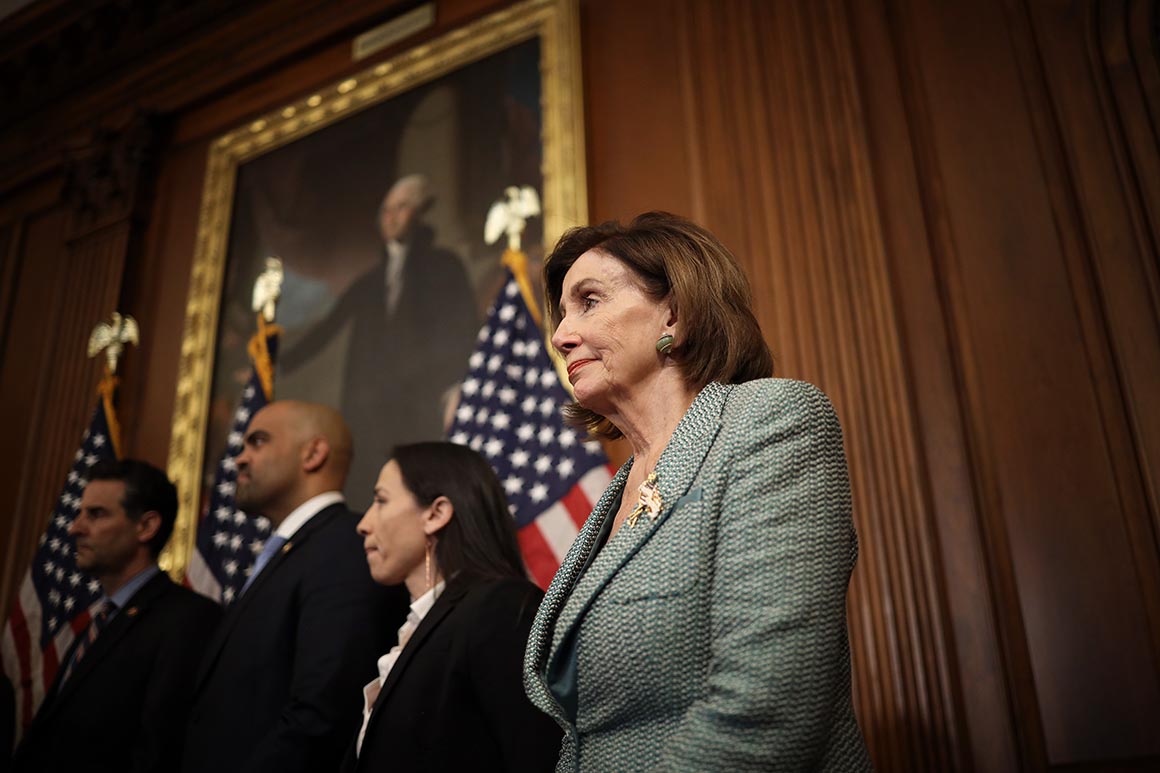 The face of the U.S. response — of course — is Trump. And he announced plans for some executive action to help the public in a Wednesday night address, including on paid sick leave. But he’s also taken a sometimes-erratic approach to the outbreak, often undermining his own administration’s recommendations and repeating falsehoods about the coronavirus being “very much under control” in the country.

Pelosi and other Democrats helped push through $8.3 billion in emergency funding last week — more than triple what the White House originally sought — and are likely to pass stimulus legislation later Thursday. The episode plays to her strengths as the longtime Democratic leader: Figure out your goals, move quickly, and build your support on the fly, while always keeping your eye on the magic 218-vote number.

The sheer variety of national emergencies Pelosi has faced during her 17 years as House Democratic leader is stunning, and represents the turbulent nature of 21st century American life — Iraq, Hurricane Katrina, the 2008 financial crisis, the federal government shutdowns of 2013 and 2018-19, and Trump’s recent impeachment, are among the highlights.

Pelosi herself ticked off many of those crises when talking to reporters on Tuesday, saying that is what helps guide her and her leadership team, even in this time of great uncertainty: “We have experience with this,” Pelosi said.

“I’ve gone through a number of these crises with her as the leader and she is unflappable,” said Rep. Emanuel Cleaver (D-Mo.). “The last thing we need is some kind of a hot-headed leader trying to figure out what we can do to hurt the other side,” he added. “She don’t play that game.”

Even before Mnuchin called her Tuesday, Pelosi was already moving forward with legislation to ensure Americans have access to paid sick leave, unemployment insurance, food and free coronavirus testing if they’re impacted by the pandemic. And she made clear that her House would move ahead with the bill even if there wasn’t buy-in from the administration.

Pelosi also has enormous political leverage during this episode. By moving quickly, Pelosi has put pressure on the White House and GOP leaders to respond. She could put a bill on the floor and see if Republicans would vote against it, something top Democrats believe will never happen.

House Minority Leader Kevin McCarthy (R-Calif.), a key Trump ally, said Tuesday his conference could end up backing the Democratic bill. McCarthy has also been talking with Mnuchin about the plan Democrats drafted.

“I think we need to do something,” McCarthy said in an interview. “I think the [proposals] that will be put forth are not very controversial and could be bipartisan… This is short-term spending, but this is needed.”

Pelosi’s relationship with Mnuchin has proved a critical lifeline to the White House, allowing the two to continue to negotiate even as Trump tweeted broadsides at Democrats Wednesday afternoon. Pelosi also shared bill language with Mnuchin before unveiling it to the public.

Mnuchin and Pelosi have gained a professional respect for each other that developed as the pair worked to clinch a massive budget deal last summer. The speaker essentially locked out Trump’s other appointed negotiators, including then-acting White House Chief of Staff Mick Mulvaney, saying he had “no credibility” on the issue, and worked solely with Mnuchin to get the deal done.

The speaker has also slightly changed her posture toward her own caucus as the crisis worsens, according to several Democrats present for leadership and caucus meetings.

Democrats said Pelosi has been very direct in private meetings, immediately shutting down ideas she doesn’t think are viable, including suggestions that lawmakers be allowed to vote remotely or an idea raised Wednesday to mail Americans a check instead of temporarily expanding some federal safety nets.

Pelosi has also worked closely with Senate Minority Leader Chuck Schumer (D-N.Y.) — as she did with his predecessor, Sen. Harry Reid of Nevada — on this effort. The two Democratic leaders have insisted that any federal response be targeted at those most directly impacted by the crisis, not used as a grab bag to advance other political agendas, such as corporate tax cuts. Pelosi and Schumer have dismissed a Trump-backed proposal to cut the federal payroll tax, instead pushing paid sick leave and other efforts to strengthen the social safety net.

Pelosi’s allies say time is of the essence — the crisis continues to evolve as the virus spreads across the country. And the response needed from Washington could change from one day to the next. In short, there isn’t time for dilly dallying.

“She is the captain of the ship and she is leading it,” said Rep. Debbie Dingell (D-Mich.). Dingell was referencing Pelosi, who on Tuesday tried to calm anxious Democrats by telling them they are the “captains of the ship” and “the last to leave.”

Pelosi has also resisted calls from some members — a minority at this point, but it’s growing — to close the Capitol. While public tours will be prohibited for the rest of March, Pelosi and other party leaders have argued that Congress should be open as long as the federal government is open.

“I can’t help but think of Lincoln during the Civil War,” Eshoo said. “The workmen reported to the president that the [iron] that was being used to build the Capitol was needed for armaments. He said, ‘We are not going to stop building the Capitol. That is a demonstration of the confidence we have.’ I think that’s an expression of her confidence.”

Covid-19 Live Updates: As Schools Across the U.S. Move to Reopen Doors, Boston Does an About-Face

Why the U.S. doesn’t have an at-home coronavirus test yet

US warned Nevada not to use Chinese COVID tests from UAE

A Nevada man got COVID-19 twice. That’s why we need a vaccine