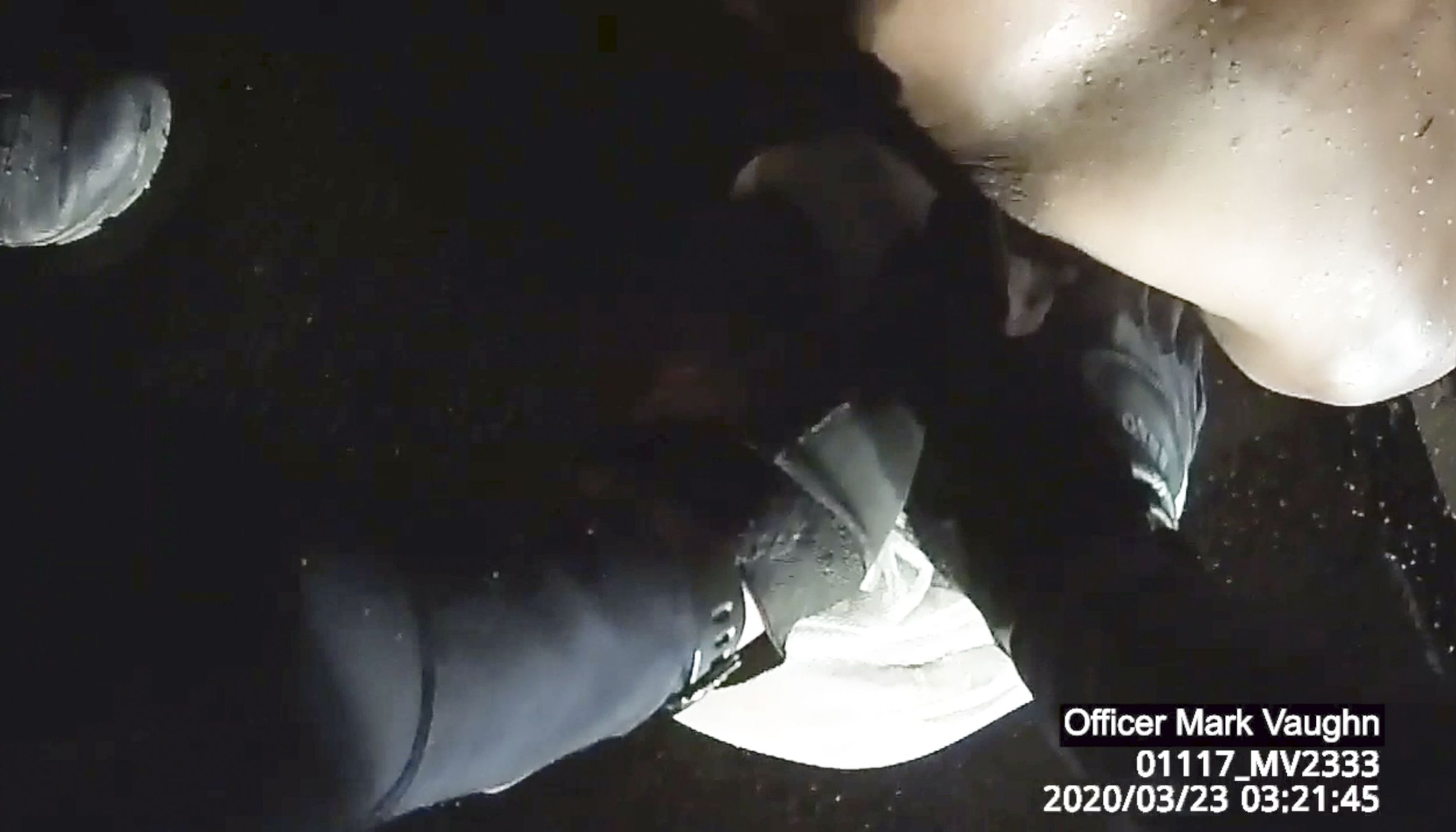 Seven police officers involved in the suffocation death of Daniel Prude in Rochester, New York, were suspended Thursday by the city’s mayor, who said she was misled for months about the circumstances of the fatal encounter.

Prude, 41, who was Black, died when he was taken off life support March 30. That was seven days after officers who encountered him running naked through the street put a hood over his head to stop him from spitting, then held him down for about two minutes until he stopped breathing.

Rochester Mayor Lovely Warren announced the suspensions at a news conference amid criticism that city officials had kept Prude’s death secret for months.

While denying a cover-up, Warren acknowledged that Prude “was failed by the police department, our mental health care system, our society, and he was failed by me.”

Hours after the announcement, a crowd of protesters unswayed by the suspensions demonstrated late into the night outside Rochester’s police headquarters. Officers doused some protesters with a chemical spray and fired an irritant into the crowd to keep activists from approaching metal barricades ringing the building.

The confrontation came on the second day of peaceful demonstrations over Prude’s death.

The mayor said she only became aware that Prude’s death involved the use of force on Aug. 4. Initially, she said, Police Chief La’Ron Singletary portrayed it as a drug overdose, which is “entirely different” than what Warren said she witnessed in body camera video. The mayor said she told the chief she was “deeply, personally and professionally disappointed” in his failure to accurately inform her what happened to Prude.

Warren said the seven officers would still be paid because of contract rules and that she was taking the action against the advise of attorneys.

“I understand that the union may sue the city for this. They shall feel free to do so,” she said.

Warren did not announce any action against Singletary. Approached at a community event, Singletary declined to comment but said he would speak later.

Prude’s death happened just as the coronavirus was raging out of control in New York and received no public attention at the time.

His family held a news conference Wednesday and released police body camera video obtained through a public records request that captured his fatal interaction with the officers.

The videos and other records detailed how police had gone looking for Prude after he bolted from his brother’s home early on March 23, hours after receiving a mental health evaluation at a hospital.

When officers found Prude he was completely naked, on the street in a light snow. He lay on the ground as they handcuffed him, then grew agitated, shouting and writhing and demanding that the officers give him a gun.

Officers put a hood over his head because he had been spitting and then pressed his face into the pavement for two minutes, police video shows.

The hoods are intended to protect officers from a detainee’s saliva and have been scrutinized as a factor in the deaths of several prisoners in recent years.

The videos show Prude, his voice muffled by the hood, begging the white officer pushing his head down to let him go. As the officer, Mark Vaughn, says, “Calm down” and “Stop spitting,” Prude’s shouts became anguished whimpers and grunts.

The officer lets Prude go after about two minutes when he stops moving and falls silent. Officers then notice water coming out of Prude’s mouth and call over waiting medics, who start CPR.

A medical examiner concluded that Prude’s death was a homicide caused by “complications of asphyxia in the setting of physical restraint.” The report lists excited delirium and acute intoxication by phencyclidine, or PCP, as contributing factors.

In his final months, Prude, who was known to his Chicago-based family as “Rell,” had been having mental health problems and had been going back and forth between his Chicago home and his brother’s place in Rochester, relatives said.

“My father should have been met with a mental health specialist. He should not have been killed in the street,” his 18-year-old daughter, Tashyra Prude, said in an interview with The Associated Press. “He did not deserve that. He was treated like an animal. And I want this to be a step toward justice for not only my father, but justice for people like Breonna Taylor, who were killed by the police.”

New York Attorney General Letitia James’ office took over the investigation of the death in April. It is still not complete.

“The Prude family and the greater Rochester community deserve answers, and we will continue to work around the clock to provide them,” James said in a statement Thursday.

Gov. Andrew Cuomo said in a statement that he watched video of Prude’s fatal encounter with police Wednesday night.

“What I saw was deeply disturbing and I demand answers,” he said, adding that he was confident James’ investigation would be thorough. “For the sake of Mr. Prude’s family and the greater Rochester community I am calling for this case to be concluded as expeditiously as possible.”

Demonstrators came out on Thursday evening for a second straight night, about 200 of them gathering near the street corner where Prude was restrained by police. Some activists felt suspending the officers was not enough.

“This is a cover up and honestly our mayor, our police chief, they should be bought up on criminal charges,” said Justin Morris.

Earlier Thursday, Prude’s brother, Joe Prude, said all his younger brother wanted that morning was “somebody to grab him up and help him.”

“No matter how you look at the situation, the man was absolutely in his birthday suit, handcuffed behind his back, on the ground already, in freezing weather,” Prude’s brother, Joe Prude, said. “How could you sit here and label that man a threat to you when he’s already cuffed up? How could you throw a bag over his head?

Good to Go: Leila Bakery and Cafe Are Must-Haves as Fall Approaches