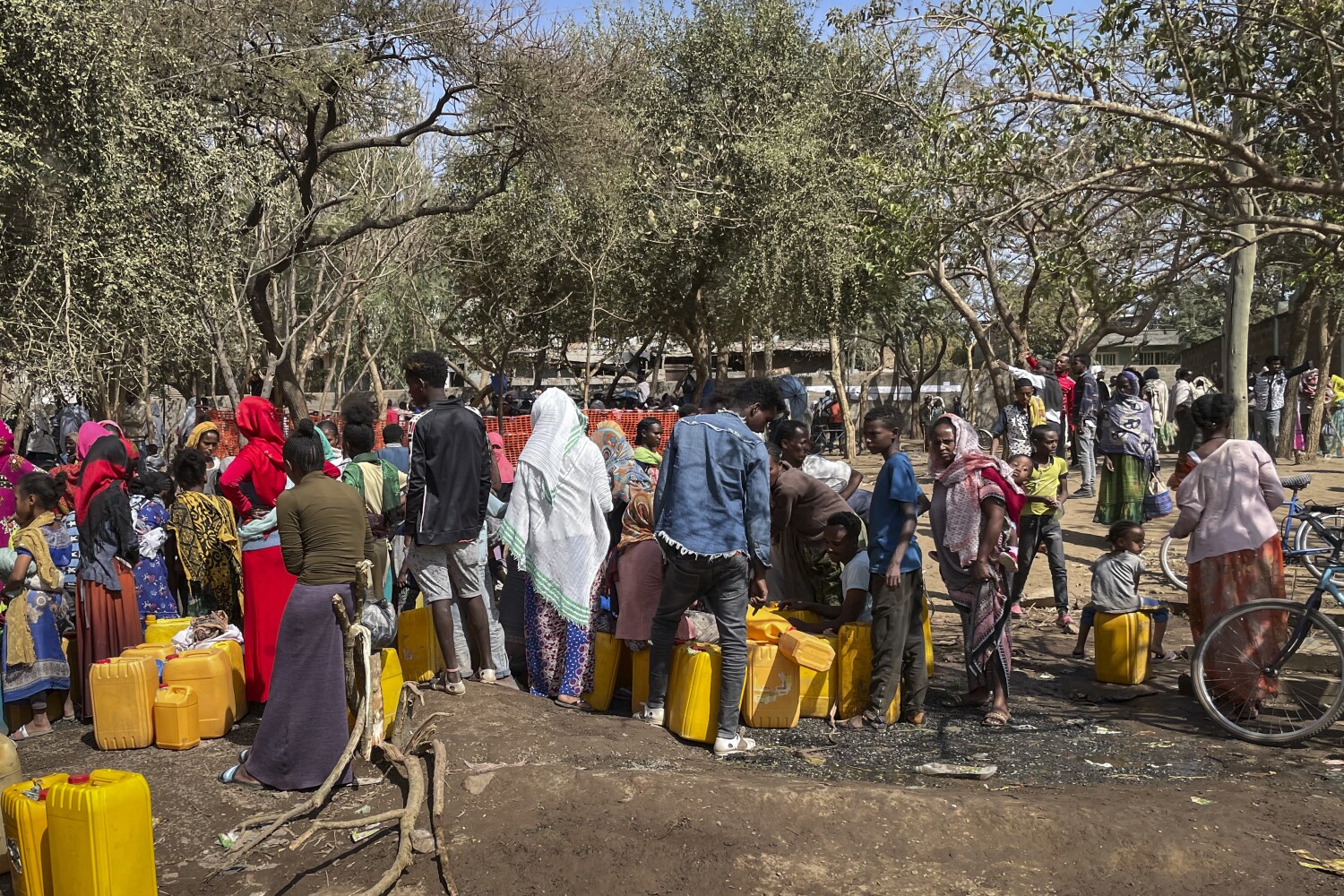 The shootings began after lunch.

It was Friday, Jan. 8, the day after Genna, the Ethiopian Orthodox Christmas. Around 2 p.m., Kidane Tesfay heard gunshots near his family’s home and thought of his two brothers, ages 17 and 20, walking outside.

“When I looked through the door’s peephole, I saw them on the ground, their blood spilling out,” he said in an interview. He also saw soldiers wearing mud-flecked green camouflage gear striding up to the door.

“I had to escape,” Tesfay said. “Luckily our house has another entrance. I ran out the back.”

What followed was an hours-long killing spree, according to accounts from 10 survivors, including Tesfay, as well as from victims’ relatives and friends and activist groups. Ethiopian soldiers went from house to house in Bora, a town in Ethiopia’s northern Tigray region, and executed more than 160 people.

Done killing, the soldiers stopped families from taking their dead. Only on Sunday — two days after the slaughter — were gravediggers allowed to set about their grim task; one of them buried 26 corpses in the graveyard of the Abune Aregawi Church, survivors said.

“The town was filled with corpses. The bodies of our friends and neighbors started to smell,” said Girmay Hagos, a 30-year-old real estate agent and survivor. “We kept our grief to ourselves — the soldiers didn’t allow us to cry.”

The massacre in Bora is another deep stain on Prime Minister Abiy Ahmed’s months-long war in Ethiopia’s northern Tigray region, which began in early November after the ruling faction there, the Tigray People’s Liberation Front, or TPLF, attacked a government military base. Abiy retaliated with what he called a “law-enforcement operation,” which killed tens of thousands of people, estimates say, and displaced hundreds of thousands more. More than 60,000 Tigrayans have fled to neighboring Sudan alone, according to the International Organization for Migration.

Behind those numbers has been a brutal, ethnically driven campaign of punishment against the 5.4 million people living in Tigray and the TPLF, which had ruled Africa’s second-most populous country for almost three decades before Abiy’s ascension to power in 2018.

Much of the war remains opaque because the government imposed a communications blackout Nov. 4, largely sealing Tigray from the wider world. Still, consistent reports have emerged in recent weeks of “extrajudicial killings, sexual violence, looting of property, mass executions and impeded humanitarian access,” the U.N.’s Special Advisor on the Prevention of Genocide said in a statement last month.

On Monday, medical charity Doctors Without Borders said that 70% of clinics it visited in Tigray “were looted, vandalized and destroyed in a deliberate and generalized manner.” Last week, U.S. Secretary of State Antony Blinken told a House Foreign Affairs Committee hearing that government forces — which include the Ethiopian army, soldiers from neighboring Eritrea and state-sponsored militiamen from the Amhara region — had committed acts of “ethnic cleansing.”

Ethiopia has rejected all accusations, and there has been little international intervention, diplomatic or otherwise. In a statement Saturday responding to Blinken’s comments, the Ethiopian foreign ministry said that “nothing during or after the end of the main law-enforcement operation in Tigray can be identified or defined by any standards as a targeted, intentional ethnic cleansing against anyone in the region.”

Mulu Nega, the chief executive of Tigray’s transitional government, did not respond to requests for comment. Daniel Bekele, who heads the government’s human rights commission, declined to talk about the massacre in Bora.

The conflict has transformed Abiy’s image from Nobel Prize-winning peacemaker — he forged a landmark deal resolving a years-long conflict with neighboring Eritrea in 2019 — into that of a ruthless leader cynically using the peace accord to make war, alongside Eritrea, against a common enemy in Tigray. Meanwhile, his country is staggering under a mountain of debt, and tensions with Sudan and Egypt are high over the Grand Ethiopian Renaissance Dam, which Ethiopia built over the Blue Nile but which countries downstream consider an existential threat.

By Nov. 26, pro-Ethiopian government forces had scythed through southern Tigray, including Bora. A few days later, Abiy declared the end of the military operation, with the government taking full control of the region and insisting that no civilians had been harmed.

But skirmishes continued for weeks in rural areas of Tigray as government forces pursued TPLF loyalists in remote communities.

One of those skirmishes, Bora residents say, happened the morning of Jan. 8 in the Ajale mountains, an area about 10 miles north of the town. After the fighting, soldiers descended upon Bora.

Hagos, the real estate agent, had gone to stay in Bora with his mother and sister, seeking safety there after hearing rumors that Ethiopian soldiers were killing civilians in the Tigrayan capital, Mekele, where he lived. With the sound of gunshots getting closer, his mother covered him with a blanket and told him to pretend he was ill.

“I lay down and acted as if I were sick and old,” Hagos said. “When the Ethiopian soldiers came to the house, they looked in and saw two women and what appeared to be a useless patient. They cursed at us and left.”

Others weren’t so lucky. Hagos said he personally knew 20 victims of the slaughter, including his 15-year-old brother, Yared; his childhood friend, Kalayu Negus, a popular barber in the town; and Alemu Amare, a neighbor who had gone out to get typhoid medicine for his daughter.

All the witnesses interviewed for this story insisted that the TPLF had no presence in the area after Nov. 26, and that there had been no provocation or warning before the soldiers began their rampage.

“Farmers. Farmers and youngsters,” one woman says over and over as she cries over the body of a family member in a video provided by Seb Hidri, an NGO in Tigray that supports Tigray’s independence. Corpses of men wearing civilian clothes lie strewn on the ground, one in a pool of blood, as other women shout and weep.

Local sources said the accents of the women, their clothing and the terrain in the video are consistent with its having been filmed either in or near Bora, but the Los Angeles Times could not independently verify the footage.

Seb Hidri says it has documented 170 killed in the town. Tghat, a news site run by pro-TPLF activists, reported on the Bora killings Jan. 12, along with another alleged massacre that took place in an area called Debre Abay.

Other instances of alleged human rights abuses have been mostly blamed on Eritrean troops or militias working alongside Ethiopian government forces.

But Hagos and other survivors insist that Ethiopian army soldiers were behind the bloodletting in Bora, based on their uniforms and the fact they spoke Amharic. Analysis by independent media outlets of videos emerging from the Debre Abay massacre suggests that Ethiopian soldiers carried out that attack as well.

Guiomar Pau Sole, spokeswoman for the U.N.’s regional Office for the Coordination of Humanitarian Affairs in Nairobi, said the U.N. had received “alarming reports of civilians being injured and killed during fighting in rural areas of Tigray, and violations against civilians, including sexual violence.”

“However, the verification of this information was, and remains, extremely challenging,” Pau Sole said.

In its statement Saturday, Ethiopia foreign ministry insisted that “the government has demonstrated its readiness to engage positively and constructively with all the relevant regional and international stakeholders in responding to the serious allegations of human rights abuses and crimes.”

Witnesses in Bora accuse the soldiers of trying to purge ethnic Tigrayans from the area.

“They killed men and boys. They came and terrorized the women, asking them where their husbands and sons are,” said Birhane Halefom, 32, a day laborer who escaped to Mekele, the regional capital, during the massacre. He added that Ethiopian troops had burned crop fields and urinated in stores to despoil the grain kept there.

Mersa Tshaye, an 18-year-old high school student, said his survival might owe to the fact that his family’s home is small and unobtrusive.

“That could be the reason why the soldiers did not notice or bother to enter — I don’t know. But maybe it was just luck,” Mersa said. “No one is left of my friends. Perhaps it was not my day to die.”

Kassa is a special correspondent. Bulos is a Times staff writer based in Beirut.

Will longer pause on J&J’s COVID-19 vaccine help or hurt?