Stocks fell on Thursday after a failed attempt to bounce back from the session’s earlier losses.

Those moves came a day after the S&P 500 closed at its lowest level since March 2021, and the Dow posted its fifth straight day of losses.

Markets once again struggled to pick a direction on Thursday. Some heavily shorted names rallied in trading and while it was unclear what was driving gains from Lucid, Zoom, GameStop and AMC, it could mean a short squeeze was taking place, where hedge funds that have profited from the steep losses in overvalued pandemic winners this year were finally closing out their short positions by buying back the shares. Short selling is a tactic where funds sell shares that are borrowed from investment banks and so in order to close the trade they need to buy the stocks and return them. A short squeeze is a rally that results from that buying.

“Even if you say we’re in a bear market, there’s rallies within bear markets that can be very sharp,” said Truist’s Keith Lerner. “I think, at least short-term, and given how oversold we are and given that we’re starting to see people nibble at some of these areas that have been the most beaten up, I think that’s at least a silver lining in a sea of red and gloom over the last couple of days.”

Shares of Lucid and Zoom popped 14.4% and 3.4%, respectively. GameStop and AMC, meanwhile, were up 15.5% and 16.5%, respectively. Rivian Automotive also soared 22% on Thursday after reporting its latest quarterly results. Carvana, which hit a two-year low earlier in the session, surged more than 41%.

While the catalyst driving the gains in Lucid, Zoom, GameStop and AMC remains uncertain, investors could be seeing opportunity in some of these washed-up names, which have plummeted since the start of the year, said Jack Ablin of Cresset Capital.

Shares of Big Tech names such as Amazon and Netflix gained 4.3% and 5.3%, respectively, while Tesla advanced 2.8%. The consumer discretionary sector, which has been hard-hit by the recent sell-off also added 2%

Meanwhile, Disney shares fell to a two-year low and were last down 0.6%. The media giant reported higher-than-expected streaming subscriber growth, but warned about the Covid impact on parks in Asia.

On Wednesday, the U.S. government posted the latest consumer price index reading, which showed an 8.3% year-over-year jump in April. That’s higher than what economists expected and close to a 40-year-high of 8.5%. The report caused investors to continue to sell risky assets like tech stocks.

Stocks have been under pressure recently, as concern over rising inflation and higher interest rates have dented market sentiment. Year to date, the S&P 500 is down about 17 and is trading nearly 18% below a record high set in January.

But even as the sell-off gains steam, Tom Lee of Fundstrat remains bullish on stocks. He said if the market finds its footing “we’re in a world of double digit expected returns.”

“This week is interesting because the stock market declines have accelerated downwards, so the waterfall is accelerating but things that normally would corroborate a waterfall decline like yields or the VIX have not been,” Lee told CNBC’s “Closing Bell: Overtime.” “The bond market’s actually been pretty stable even in the face of a hot CPI and the VIX actually has been falling.”

He noted that of the 16 times since 1940 that the market has declined 16% in a four-month period, it was higher six months later in 12 of those events. 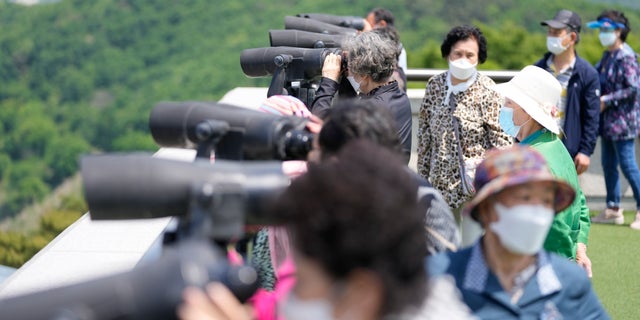