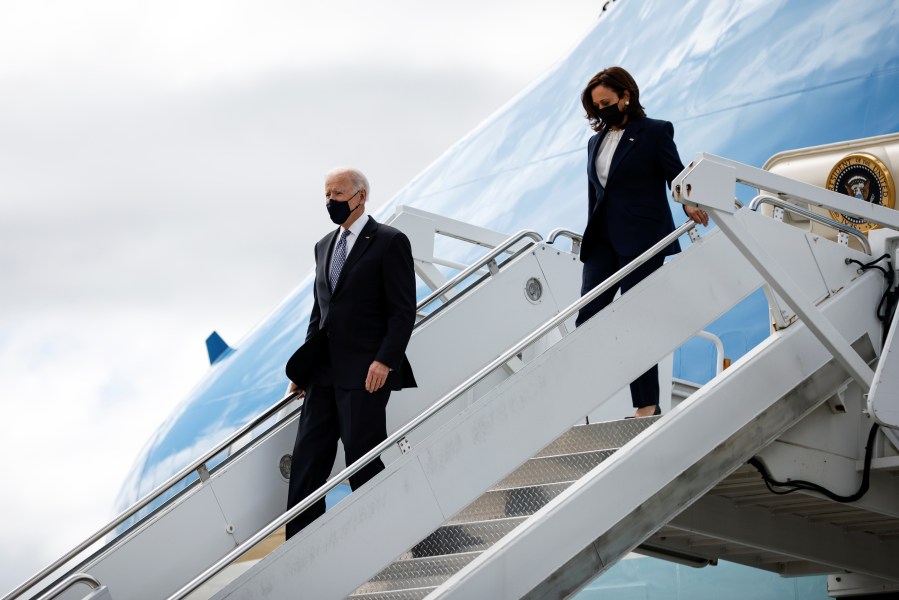 The presidential trip was planned before the shooting, as part of a victory lap aimed at selling the benefits of the recently-passed coronavirus relief package. But Biden and Harris changed the focus of the trip after the attack, feeling “it was important to change the trip a little bit and offer their support and condemn the violence,” a White House official said.

Biden and Harris will meet with Asian American state legislators and other community leaders about racist rhetoric and actions against Asian Americans and Pacific Islanders. Harris is the first person of South Asian descent to hold national office. NewsNation will livestream the event in the player above.

Biden called on U.S. lawmakers to quickly pass a COVID-19 hate crimes bill, saying while the motive was still unknown in this week’s shooting in Georgia, the nation faced an “ongoing crisis of gender-based and anti-Asian violence.”

“It’s time for Congress to codify and expand upon these actions — because every person in our nation deserves to live their lives with safety, dignity, and respect,” he said in a statement released as he headed to Georgia.

Biden stumbled as he climbed aboard Air Force One to head to Georgia. White House spokeswoman Karine Jean-Pierre told reporters he was “doing 100 percent fine.” She suggested high winds at Joint Base Andrews near Washington may have been a factor.

Biden ordered the U.S. flag flown at half-staff at the White House to honor the victims of Tuesday’s shootings.

Robert Aaron Long has been charged with eight counts of murder for killing four people at two different day spas in Atlanta — Gold Spa and Aromatherapy Spa — and four other victims at Youngs Asian Massage Parlor in Cherokee County Tuesday.

Authorities said Long, who’s white, told police his act wasn’t racially motivated and that he potentially had a “sex addiction.”

“Nothing is off the table for our investigation,” Atlanta Deputy Police Chief Charles Hampton said at a news conference in response to a question about whether police were looking at the killings as possible hate crimes.

The incidents of hate crimes against Asian Americans rose by 149% in 2020 in 16 major cities compared with 2019, according to the Center for the Study of Hate and Extremism. Nearly 3,800 incidents have been reported to Stop AAPI Hate, a California-based reporting center for Asian Americans and Pacific Islanders, and its partner advocacy groups, since March 2020.

The shootings appear to be at the “intersection of gender-based violence, misogyny and xenophobia,” Georgia state Rep. Bee Nguyen said, the first Vietnamese American to serve in the Georgia House and a frequent advocate for women and communities of color.

In his first primetime address to the nation as president, Biden last Thursday — five days before the Atlanta killings — called attacks on Asian Americans “un-American.” Biden ordered the flag be flown at half-staff at the White House to honor the victims of Tuesday’s rampage.

The attack was the sixth mass killing this year in the U.S., and the deadliest since the August 2019 Dayton killing that took the lives of nine people, according to a database compiled by The Associated Press, USA Today and Northeastern University.

West Nile Virus is detected a Corpus Christi mosquito pool. Here's how you can stay safe

Why Is Deep Ellum’s The Bomb Factory Changing Its Name?

Things To Do: Mickey Gilley And Johnny Lee To Perform At The Dosey Doe

The Scientist Working to Produce a Globally Accessible COVID-19 Vaccine