WASHINGTON (NewsNation Now) — As the U.S. House of Representatives moved on Wednesday toward a vote on impeaching President Donald Trump, Republican leaders in the Senate weighed whether to launch a trial on Friday on whether to remove him from office, a source familiar with the deliberations said, though no final decision was reached.

The internal Senate discussions were unfolding as the Democratic-controlled House debated impeaching the president for his role in last week’s siege of the U.S. Capitol, when Trump supporters breached the building’s security, sent lawmakers fleeing and left five dead in their wake, including a police officer.

Trump faces a single charge of “incitement of insurrection.” If approved, Trump would become the only U.S. president twice impeached. National Guard troops and police provided security at the Capitol. 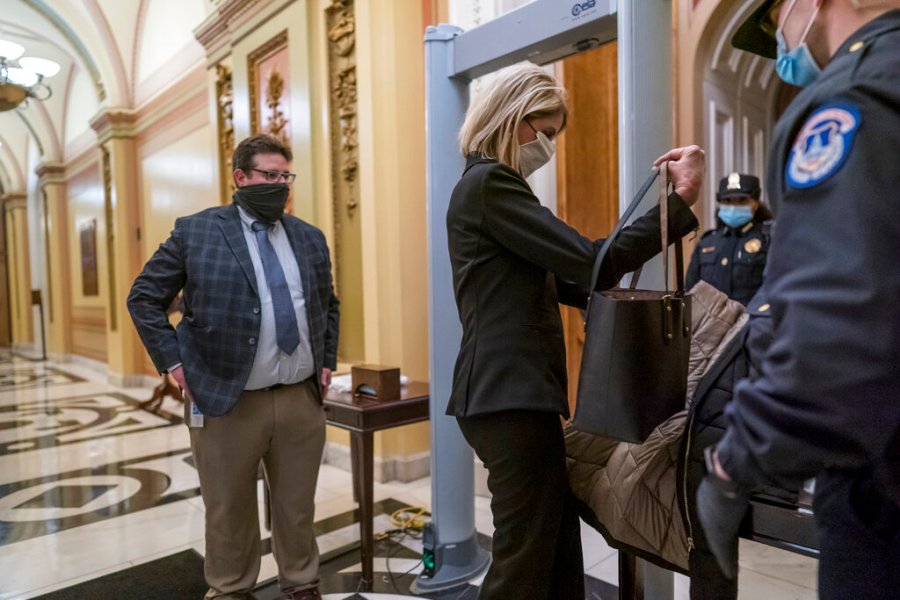 Metal detectors are set up for lawmakers and staff before entering the House chamber, a new security measure put into place after a mob loyal to President Donald Trump stormed the Capitol, in Washington, Tuesday, Jan. 12, 2021. (AP Photo/J. Scott Applewhite)

Under the U.S. Constitution, impeachment in the House would trigger a trial in the Senate on whether to oust the president. Republican Senate Majority Leader Mitch McConnell had previously suggested no trial could begin until the Senate was scheduled to be back in regular session on Jan. 19, only a day before Trump’s term ends and Democratic President-elect Joe Biden is due to be sworn in.

Democrats, including Senate Minority Leader Chuck Schumer, have pressured McConnell to agree to bring the Senate back under emergency circumstances to take up Trump’s impeachment before he leaves office.

But a spokesperson confirmed on Twitter Wednesday a Washington Post report that McConnell had informed Schumer he is not willing to bring the chamber into emergency session to consider removing Trump from office following House impeachment.

While the first impeachment of Trump last year brought no Republican votes in the House, a small but significant number of leaders and other lawmakers are breaking with the party to join Democrats on Wednesday.

At least six Republican lawmakers, including third-ranking House GOP leader Liz Cheney of Wyoming, were unswayed by the president’s logic. The Republicans announced they would vote to impeach Trump, cleaving the Republican leadership, and the party itself. 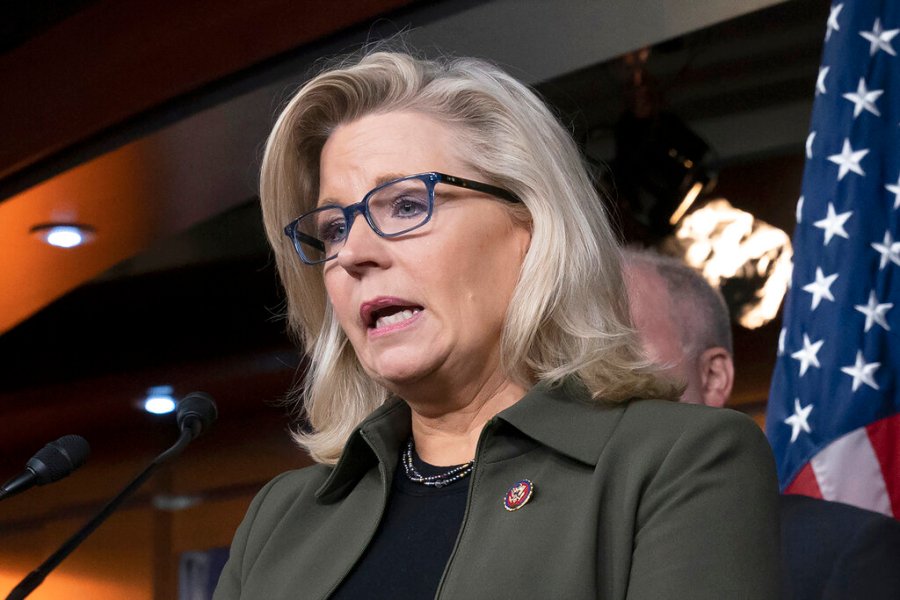 So far, Republican Reps. John Katko of New York, a former federal prosecutor; Adam Kinzinger of Illinois, an Air Force veteran; Fred Upton of Michigan; and Jaime Herrera Beutler and Dan Newhouse of Washington state announced they, too, would join Cheney to vote to impeach.

Hoyer told reporters he expected between 10 and 20 House Republicans to vote for impeachment on Wednesday.

“We know that the president of the United States incited this insurrection, this armed rebellion against our common country. He must go. He is a clear and present danger to the nation that we all love,” she said.

Meanwhile, Republicans made speeches Wednesday urging the House not to impeach Trump.

“He should have immediately denounced the mob when he saw what was unfolding,” said McCarthy, a Trump ally who has repeated the president’s unfounded claims about the validity of the 2020 presidential election.

“Instead of moving forward as a unifying force, the majority in the House is choosing to divide us further,” Oklahoma Republican Tom Cole said on the House floor. “Let us look forward, not backward. Let us come together, not apart. Let us celebrate the peaceful transition of power to a new president rather than impeaching an old president.”

While more Republicans may vote to impeach — and leaders are allowing them to vote as they wish — it’s far from clear there would then be the two-thirds vote in the evenly divided Senate needed to convict and remove Trump. Republican Sen. Pat Toomey of Pennsylvania joined Sen. Lisa Murkowski of Alaska over the weekend in calling for Trump to “go away as soon as possible.”

Confronting his potential place in history, Trump warned lawmakers off it, suggesting it was the drive to oust him rather than his actions around the violent riot that was dividing the country. 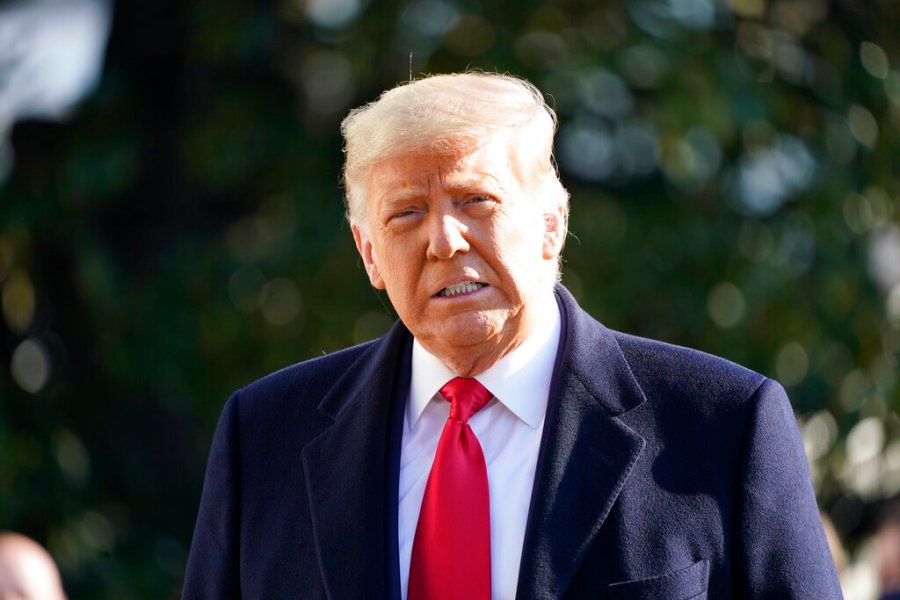 President Donald Trump speaks to the media before boarding Marine One on the South Lawn of the White House, Tuesday, Jan. 12, 2021 in Washington. The President is traveling to Texas. (AP Photo/Gerald Herbert)

A Capitol police officer died from injuries suffered in the riot, and police shot and killed a woman during the siege. Three other people died in what authorities said were medical emergencies. Lawmakers had to scramble for safety and hide as rioters took control of the Capitol and delayed by hours the last step in finalizing Biden’s victory.

The outgoing president said, “I want no violence.”

Unlike a year ago, Trump faces impeachment having lost his own reelection as well as the Senate Republican majority.

On Tuesday, the House tried first to push Vice President Mike Pence and the Cabinet to intervene, passing a resolution Tuesday night calling on them to invoke the 25th Amendment to the Constitution to remove Trump from office. The resolution urged Pence to “declare what is obvious to a horrified Nation: That the President is unable to successfully discharge the duties and powers of his office.”

Hours before the vote, however, Pence made it clear he would not do so. In a letter to House Speaker Nancy Pelosi, Pence said it was “time to unite our country as we prepare to inaugurate President-elect Joe Biden.”

Unprecedented events, with just over a week remaining in Trump’s term, are unfolding as the FBI warned ominously of potential armed protests by Trump loyalists ahead of Biden’s inauguration on Jan. 20. Capitol Police urged lawmakers to be on alert.

The Insurrection Act: What is it and why is it trending?

Biden has said it’s important to ensure that the “folks who engaged in sedition and threatening the lives, defacing public property, caused great damage — that they be held accountable.”

Fending off concerns that an impeachment trial would bog down his first days in office, the president-elect is encouraging senators to divide their time between taking taking up his priorities of confirming his nominees and approving COVID-19 relief, while also conducting the trial.

The impeachment bill draws from Trump’s own false statements about his election defeat to Biden. Judges across the country, including some nominated by Trump, have repeatedly dismissed cases challenging the election results, and former Attorney General William Barr, a Trump ally, has said there was no sign of widespread fraud.

Like the resolution to invoke the 25th Amendment, the impeachment bill also details Trump’s pressure on state officials in Georgia to “find” him more votes and his White House rally rant to “fight like hell” by heading to the Capitol.

While some have questioned impeaching the president so close to the end of his term, there is precedent. In 1876, during the Ulysses Grant administration, War Secretary William Belknap was impeached by the House the day he resigned, and the Senate convened a trial months later. He was acquitted.

The Associated Press and Reuters contributed to this report.

Hundreds of migrants freezing in heavy snow in Bosnia camp

Wave before second wave? COVID-19 cases sharply rising across US