“The local governments are very neglected,” said Dave Projansky, a state employee who works in the Maine Department of Health and Human Services. “The airlines don’t need a bailout, but the municipalities and the state governments do.”

“I’m calling on Susan Collins to go back to the table and vote ‘yes’ on the HEROES Act,” said Serina DeWolfe, lead organizer of the Maine chapter of the American Federation of Teachers (AFT), which represents classroom teachers. “The cuts in funding will affect our members in a detrimental way, especially public K-12 schools.” 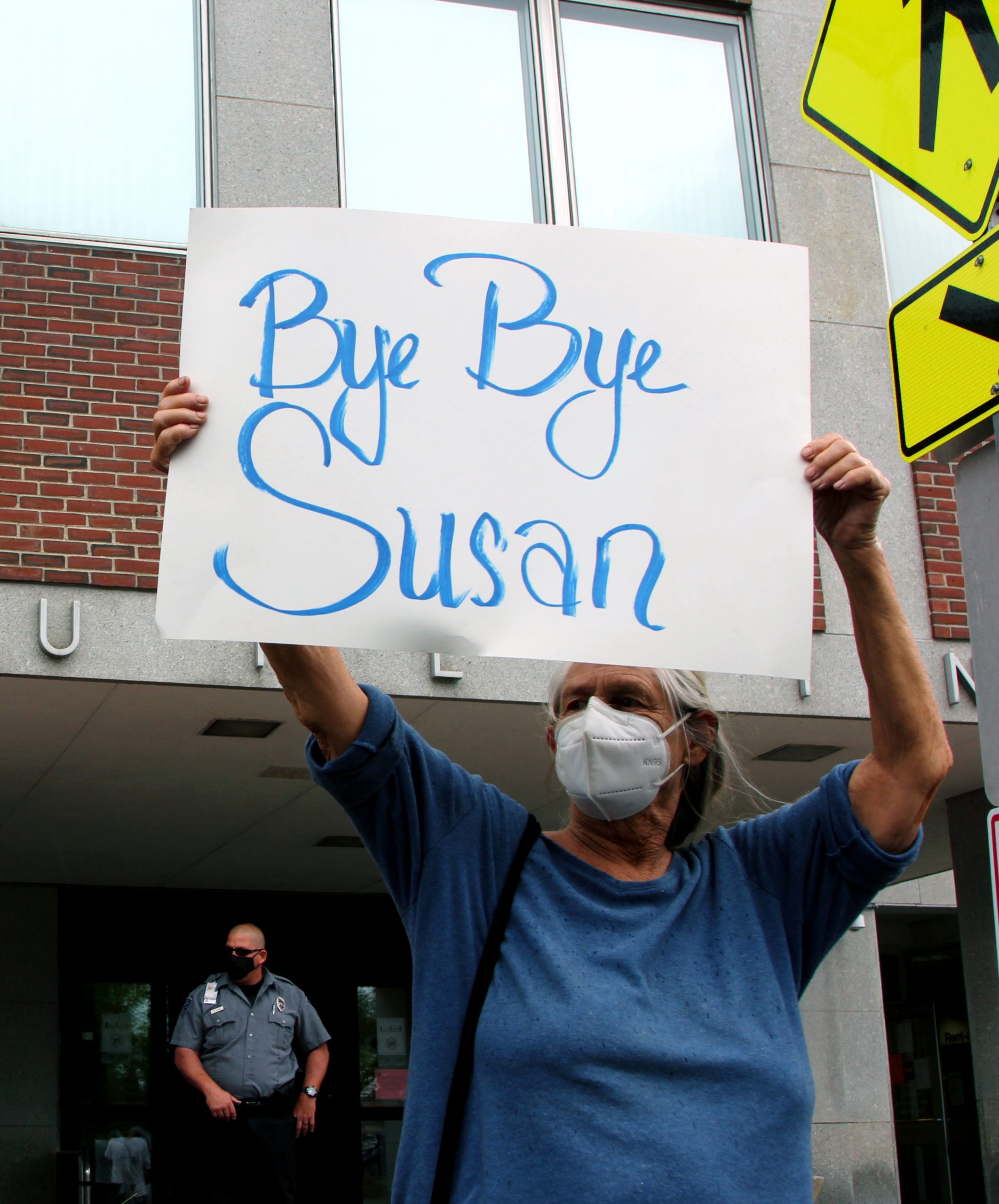 A protester outside of Sen. Susan Collins’ office in Augusta. | Dan Neumann, Beacon

Labor groups such as AFT and the Maine Service Employees Association (MSEA), which represents more than 10,000 workers, joined local environmental groups, including 350 Maine, in calling on Collins and Sen. Angus King on Wednesday to back the HEROES Act, a $3 trillion spending package passed by U.S. House Democrats in May, meant to address the economic devastation wreaked by the COVID-19 pandemic.

About $1 trillion of the proposed spending would go to state and local governments that are shouldering much of the cost of the pandemic response.

State revenues are expected to plummet due to declining sales tax revenues and falling income tax withholdings at the same time that costs are spiking as more people turn to Medicaid, unemployment benefits, and other forms of public assistance.

Maine’s state budget is facing an estimated 30-percent revenue decline in the next fiscal year from the economic shock of the COVID-19 pandemic, the Maine Center for Economic Policy (MECEP) reported in May, resulting in a $1.2 billion shortfall that could put critical services and state jobs at risk.

Most state governments, including Maine, are required by statute or their constitution to balance their budgets, unlike the federal government, meaning steep cuts are likely unless the Senate acts.

Senate Majority Leader Mitch McConnel (R-Ky.) has declared the HEROES Act “dead on arrival” while Collins has backed a different bill, the SMART Act, which also offers some relief to the states.

“While the plan, known as the SMART Act, is a step in the right direction, it falls short of the need identified by the nation’s governors and of what the data show is needed,” MECEP analyst Sarah Austin wrote in a May 22 blog post.

Labor and climate activists find common cause during COVID

The protest outside Collins’ Augusta office was part of a national “#SenateFail Day of Action” and is one of many protests or actions planned in Arizona, Colorado, Florida, Iowa, Kentucky, North Carolina, Maine, Ohio, Pennsylvania and South Carolina — states with Republican senators considered vulnerable in the November election. 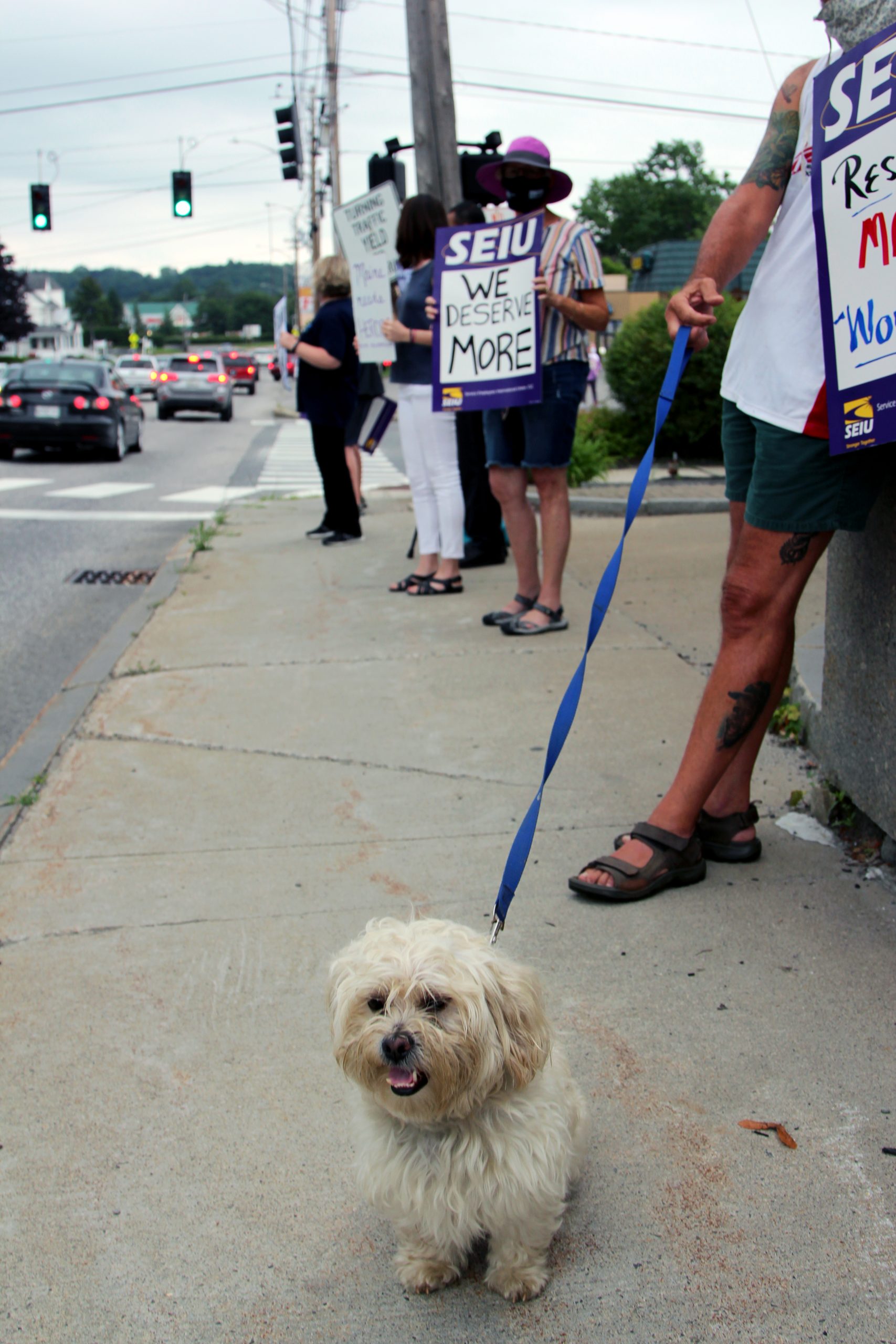 Nationally and in Maine, labor and climate activists have joined together to pressure Senate Republicans.

“They clearly are failing, and we need them to do their job,” said Mike Cavanaugh, an organizer for the Labor Network for Sustainability. The Trump administration has also used the pandemic to roll back or weaken a number of important environmental and air quality regulations.

“I just think there’s been a growing recognition on the part of many of the environmental groups that there’s definitely a common cause with the labor movement,” Cavanaugh said. “And this is a moment that sort of crystallizes that the climate crisis and the inequality crisis are converging right now in 2020.”

Fears of a stalled recovery

Employees’ wages in Maine’s executive branch departments were reduced by more than 9.7 percent between 2009 and 2013, with no cost of living increases negotiated during that time period. Since then, across-the-board wage increases have amounted to just a 0.3 percent net raise.

MSEA representatives say the result has been that the state government has shed public service jobs, such as snowplow drivers, 911 dispatchers and caseworkers, because it has failed to stay competitive with private-sector wages.

At the same time, reducing jobs and therefore the number of Maine workers’ putting money back into the economy will only compound the effects of the recession, labor advocates stressed Wednesday.

“We learned from the previous economic downturn that when the state cuts back on its services, and all that it provides to its citizens, it actually really slows recovery down,” said MSEA president Dean Staffieri. “Maine has shown that we’re very slow in recovering, compared to other states in New England, when we do that kind of thing.”

Racism is a public health crisis