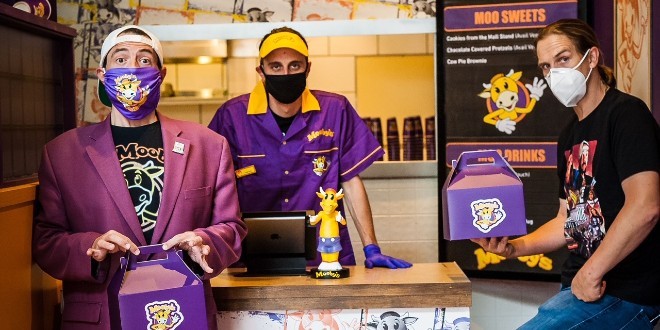 If you’ve ever watched Dogma and thought to yourself, “Man, I could really go for some ‘Hater Tots,'” your wish is about to be granted. Mooby’s, the fictional restaurant that makes a recurring appearance throughout several of Smith’s films, is coming to town this spring.

The Mooby’s pop-up is the brainchild of Smith and event producer Derek Berry, who came up with the idea last April. According to Berry, Smith had been wanting to do a real-life version of the fictional fast-food joint for some time, and was inspired to finally act as a way to help struggling restaurants. At first, the event was supposed to be a ten-day pop-up partnership with Postmates in Los Angeles, but once Smith and Berry saw how successful it was, they decided to expand the idea to a national audience.

The St. Louis event, which was announced today, will be the eleventh stop on the tour and will take place April 21 through May 3 at a yet-to-be-named restaurant. Folks interested in attending are encouraged to sign up on the event’s website; doing so will give them advance notice of where the event will take place, as well as early access to tickets. The cost will be $30 per person and tickets include an entree, side dish and 45-minute time slot to hang out in the immersive Mooby’s experience. Mooby’s, other Askewniverse-themed merchandise and beer from a to-be-announced St. Louis brewery will also be available for purchase.

Fans of Smith’s films will recognize several favorite Mooby’s dishes at the pop-up, including the signature “Hater Tots” and the “Cow Tipper,” a triple-decker burger that will be available in both beef and plant-based versions. Smith, who is vegan, has committed to making 50 percent of the menu vegan-friendly.

We are always hungry for tips and feedback. Email the author at cheryl.baehr@riverfronttimes.com.