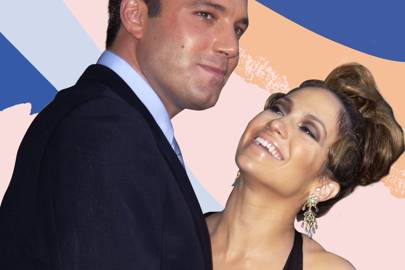 Unless you’ve switched off from the news cycle this past week (honestly, we don’t blame you), then you’re probably aware of the biggest celebrity news story of the moment: Jennifer Lopez and Ben Affleck are back together.

The pair dated and got engaged in the early 2000’s and were the couple responsible for the trend to merge a celebrity couple’s name together – Bennifer walked so Brangelina could run. But they broke off their engagement in 2004 after two years together.

The ultimate ’90s power couples you’ve probably forgotten about, but that were absolutely iconic

Now, nearly two decades on, they have been pictured vacationing together in Malibu following JLo’s split with former flame, A-Rod (Alex Rodriguez). But they’re not alone in rekindling a flame with an ex.

Further studies published in the journal Social Psychological and Personality Science, found that the most popular reasons for rekindling a relationship included optimism (hoping their partner would change), emotional investment in the relationship, family duties and fear of uncertainty.

“Many of us pine for an old flame, a relationship that didn’t go the distance for whatever reason,” Counselling Directory member and psychotherapist Kirsty Taylor tells GLAMOUR. “We have the ability to look back with rose-tinted glasses and a nostalgic view of the relationship, forgetting the things that were wrong, the pain that we suffered at the time. Often the allure of an old flame lies in a fantasy that is not based on reality.”

Has Covid marked the end of the casual relationship? Fast-moving romances are on the rise and here’s why

“The important thing to think about in these situations is how much of your memory is based on the reality of the relationship and the individual as you knew them then, and how much is based on any unhappiness you are experiencing now that you feel could almost be ‘fixed’ by a return to an old flame,” Kirsty continues. “This ‘relationship cycling’ that we might find ourselves drawn to often does not fix the issues that exist within us.”

For those that do want to pursue a new relationship with someone you may have dated previously, Kirsty recommends letting go of any issues from the past and not viewing your relationship through that nostalgic lens.

“Firstly, assess how much time has passed since you were together. Ask yourself if you feel in a good place and if you have really healed from your past relationship. Check this desire to rekindle your relationship hasn’t been triggered by something like seeing them with a new partner, or a recent break up of your own. It’s important to be in a positive headspace before you think about returning to an old relationship,” Kirsty advises.

Communication is key when considering revisiting an old relationship. The reasons why the relationship broke down should be addressed and discussed as they could soon surface again.

The longest celebrity relationships (to restore your faith in love ❤️)

“Talking about what went wrong openly, as well as what you loved about each other, allows for time, space and reflection for both of you,” Kirsty says.

“It also allows you to see if the other person is willing to acknowledge the issues that led to the break up first, and gives you a blueprint to talk about those things as you commence on a new journey together. If your ex is unwilling to engage in this conversation, or just wants to start fresh, the risk is that they’re unable to see the issues and they may well crop up again later down the line.”

The fact that JLo and Ben have rekindled their relationship nearly 20 years after their break up actually works in their favour, as enough time needs to pass following a break up to allow both parties to heal and move on in a sense.

“There isn’t a set time limit, but being very comfortable being alone and not feeling dependent on someone else is a good starting place,” Kirsty explains. “It’s also worth checking how you feel about your ex. If there is still anger or great sadness or pain, it’s probably too soon to be engaging with them again.

“Ensure you have strong foundations of your own before you consider getting back with your ex; you need to know you can be happy with them and just as happy without them. This allows you to think more logically and be able to untangle yourself more easily if you start to notice things have not changed, and you are feeling unhappy.”

Before sliding into your ex’s DMs, it’s also worth checking out your mental health as Kirsty says getting back together with an old flame can “make you more prone to anxiety and depression”. Patterns of breaking up and getting back together can also lead to psychological stress, higher stress levels and ‘periods of increased unhappiness’.

Amy Schumer has sex ‘every 7 to 10 days’ – so what does a sex therapist deem a ‘normal’ amount in a long-term relationship?

“If you initially broke up because your partner cheated on you, this can have a great effect on the trust within your relationship. You need to know that this will not happen again, and you also need to be able to believe that within yourself and let it stay in the past. Whilst it may cause you pain from time to time when you remember it, if you bring it up or it becomes a central driver in your relationship again, the relationship will not survive the lack of trust,” Kirsty explains.

“If you really want to make it last this time, proceed with caution. Tread very lightly and ensure you have given it a lot of thought before you go ahead and get together with someone again.”

She says to consider dating casually to start with, to gauge whether it feels right or not.

Foster and migrant kids shut out from Covid vaccinations

Asylum-seekers in Mexico allowed to return to U.S., DHS says