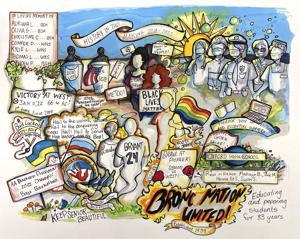 JACI WEBB
For The Gazette

During those first few weeks of freshman year, Matti Thompson was too intimidated to look around Senior High as she dashed from class to class.

When she finally looked up, there they were — more than 100 murals inspiring her to make art. Now, four years later, the graduating senior is leaving her own legacy at Senior, painting a mural that reflects the turbulent times of her high school years. So much has happened since she entered Senior High — shootings, traffic deaths of some of her schoolmates, a pandemic, the Black Lives Matter and Missing and Murdered Indigenous Women movements. The deaths of Kobe Bryant and Justice Ruth Bader Ginsberg. How to fit it all into a 4-foot by 8-foot panel?

Thompson put a lot of thought into her mural and spent a good part of her senior year adding to her design. It had to be perfect.

“I actually started the design for this last year. I lost that and had to do it again. I went to every art teacher in the school to get feedback,” Thompson said.

The first Senior High mural was painted by Dolores Keller in 1947, and it’s still up on third floor. Those early murals were painted directly onto the walls and a few were lost because of construction, which is why they are now painted on boards on the wall that can be moved.

On one mural you can imagine the beginnings of Woody from “Toy Story,” in animator Bud Luckey’s painting of the Battle of Canyon Creek, which captured both cavalry and Native warriors. Luckey went on to a long career in film, primarily as an animator for Pixar and Disney. Thompson’s favorite mural is a work by Conor Urion from 1997 with the artist’s self-portrait in the center and nods to various other artists, including Brandon Lee in the film, “The Crow,” and Salvador Dali’s melting clock.

“It’s emotion-charged and I love it,” Thompson said. “Stuff like this you could write 1,000 papers on.”

The Senior High murals were chronicled in the book, “If Walls Could Speak,” which is available for sale at the Caramel Cookie Waffle café on 1700 West in Midtown. It has been a few years since a new mural went up, said Senior High photography and art teacher Houston Harmon. The art department created an application process, asking students to submit a proposed design for the mural and to write an essay about their idea and imagery, said art department chair Katie Goldammer. Thompson became the perfect candidate for a new mural, which will be completed and hung this summer.

“Matti is a phenomenal artist and student here at Senior,” Goldammer said, “Many of us have had the privilege of teaching her in our art classes and watching her grow and develop her style.”

Harmon complimented Thompson’s willingness to accept suggestions, and her desire to capture the challenges of her high school years.

“It’s been a tough few years around here,” Harmon said. “Then you throw in a pandemic.”

Thompson’s MasterLube mural on Grand Avenue just won first place in the War of the Murals, and Thompson is proud to be a voice for Senior High.

“This is huge for me,” Thompson said of the murals. “It’s a bragging right. I look at these walls and see all the murals here, and it feels good that mine will be up there. I want to do our school proud.”

Thompson wanted to get some positive news on her mural, too, so she added Senior Principal Jeff Uhren being named Principal of the Year for 2022. She painted in members of the Senior High Band, which she has played bassoon in. Bud Luckey is on there too, along with a mention of the boys basketball team winning the AA Eastern Division, and a reference to standout track athlete Malikye Simpson. To represent the challenges of the pandemic, Thompson focused on the heroism of first responders

“This isn’t just about me, it’s my thoughts about the world,” Thompson said.

“It’s got a lot of teeth to it,” Harmon said. “It was pretty spectacular. There are only a few kids that come through the program that have this kind of talent. Matti takes it to a new level.”

The $1,000 mural scholarship that Thompson was awarded is provided through the Billings Education Foundation. The John Walter Urbaska “Pepe” Art Mural Scholarship is offered to graduating seniors whose mural ideas are selected. It is set up to provide financial assistance in pursuing fine arts. Thompson is taking a gap year from school to finish up studies to become a licensed pilot, but she plans to continue making art.

Receive the latest in local entertainment news in your inbox weekly! 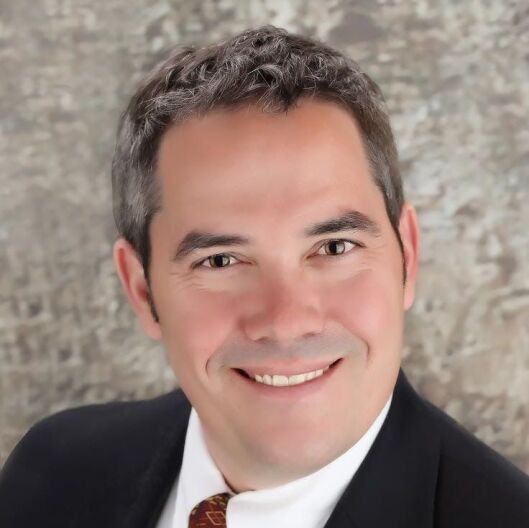