Amid an ongoing affordable housing crisis, advocates and housing experts are concerned that the decision last month by the U.S. Supreme Court to overturn a federal moratorium on evictions will exacerbate an already challenging landscape for Maine renters.

The Supreme Court order overturning the ban was issued in late August after the Biden administration took action to continue the moratorium in large parts of the country. The eviction ban was originally put in place to protect renters after the onset of the COVID-19 pandemic.

The decision to strike down the ban comes as Maine continues to grapple with a housing crisis that has left the state with a shortage of about 20,000 affordable units, with 25,000 Maine households on the waitlist for federal Section 8 vouchers.

Rep. Victoria Morales (D-South Portland), who chairs a housing working group of state legislators, said the affordability crisis in Maine along with the reversal of the eviction ban has created a precarious housing landscape for many people.

Erica Veazey, managing attorney at the Bangor office of Pine Tree Legal Assistance, said the moratorium being overturned eliminates an important tool for tenants to fight back against evictions. While Veazey said the ban only covered certain situations, it at least provided tenants with a modicum of security.

“Those protections have now been stripped away from them and [tenants] are left with fewer options to protect themselves,” Veazey said, adding that Pine Tree Legal has been hearing from many renters who are worried about their housing situation. Veazey encouraged people facing eviction to contact the legal services organization for help.

Veazey said those most likely to be impacted by the ban being overturned are the low-income individuals that Pine Tree Legal often represents, many of whom have faced significant financial difficulties during the pandemic.

For those facing eviction because of financial difficulties, one piece of good news is rental assistance funds approved by Congress, Veazey said. Maine has been faster than most states in disbursing that aid, with about $58.4 million approved for more than 10,000 eligible households as of the beginning of September.

Denise Lord, senior director for strategic initiatives at Maine State Housing Authority, said the rental assistance program is a key part of the effort to keep people in their homes.

“We have the resources, we have the infrastructure,” Lord said. “If people are having trouble paying their rent, there are ways we can help. And we have helped a lot of people.”

Still, one challenge with the rental assistance program is that landlords have to agree to accept the money, Veazey said, with some refusing to take the funds.

Given the current situation, Deb Ibonwa — policy and legal advocate at Maine Equal Justice — said it’s crucial that tenants be protected, arguing that it will be difficult to effectively combat the ongoing pandemic if many people are being forced out of their homes.

“We can’t undo protections,” she said. “We need to recognize that we are in a public health and affordable housing crisis, and that it’s not going to end anytime soon.”

Ibonwa argued for a statewide eviction moratorium that covers both non-payment of rent as well as no-cause evictions against tenants without a lease. No-cause evictions were not included in the federal moratorium on evictions when it was in place, and a bill to ban the practice in Maine failed in the legislature this session.

The reversal of the eviction ban has also spurred concerns that the power disparity between landlords and tenants will only widen, emboldening landlords who wish to remove tenants.

Sally McQuade, who was living at an apartment complex called Spruce Meadow Apartments in Kennebunk, said her recent experience with the owner of the complex, Peter McCarthy, is one example of that dynamic. 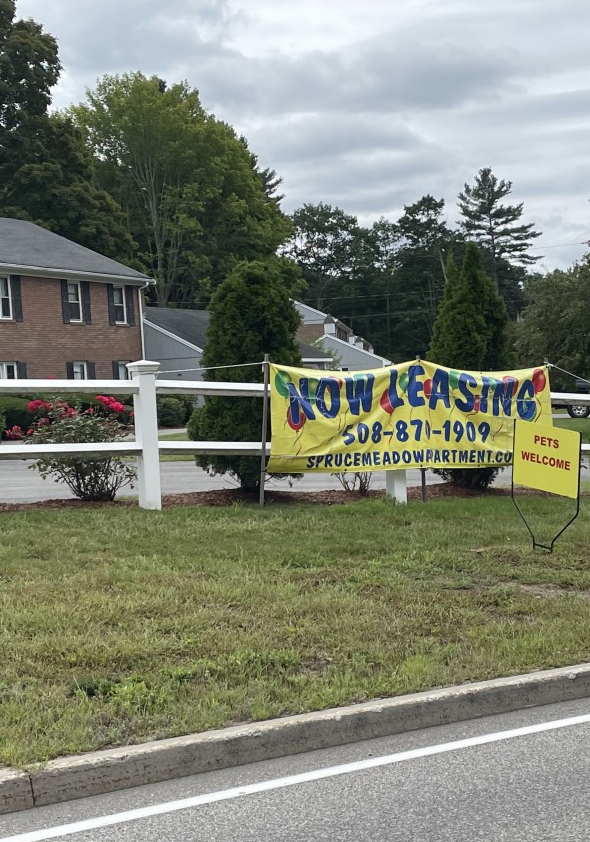 McQuade acknowledged that she broke the terms of her lease by having a pet that she hadn’t notified property managers about. However, she said pets weren’t barred by the apartment complex; owners had to pay a deposit to have them. McQuade said she was in the process of getting enough money to pay the deposit when her co-signer received a “notice to quit” message, starting the eviction process.

McQuade said she didn’t receive the email and didn’t know about it until her co-signer sent her the notice. The notice, which was dated August 29, gave McQuade until noon on September 10 to vacate the property. She decided soon after to give the landlord her one month’s notice, hoping she could stay in her place until the end of September.

However, according to an email that was provided to Beacon, McCarthy responded on the morning of August 30 by writing: “Hi Sally, We just checked you [sic] file and your lease is up on Tuesday August 31, 2021. You do not have until September to leave. Please make the necessary arrangements to be out by tomorrow or we will have the Sheriff serve you with eviction papers.”

McQuade said it wasn’t true that her lease was up. She wasn’t able to reach McCarthy but called his office to lodge a complaint about the notice. McQuade said McCarthy backed off the demand that she move out the next day, and she received a ten-day eviction notice in the mail.

McCarthy did not respond to a request for comment.

The experience left McQuade angry. And she said she’s not alone, saying that other tenants have had difficult dealings with McCarthy.

She said the landlord seemed emboldened by the eviction moratorium ending, arguing that he used it as an opportunity to clear out some tenants.

“I just think there’s a huge imbalance,” she said of the relationship between landlords and renters. “It’s especially true with lower-income people. We’re the ones who are totally getting screwed.”

McQuade said she was able to find another place to live. However, for many other renters in Maine, landing affordable housing is an increasingly difficult challenge.

Sam Spadafore, an organizer at Maine Renters United and a member of the BellPort Tenants Union, said that’s particularly true if someone has been evicted and needs to find housing quickly.

“It is really difficult to find housing on short notice that is affordable unless you’re willing to go someplace that is potentially not the best place to live,” Spadafore said.

A significant driver of the affordability crisis is the scarcity of units, Morales said. Morales, who is the executive director of the Quality Housing Coalition in addition to serving in the legislature, added that the lack of units in Maine is painfully apparent in the organization’s work to help find housing for those who need it. She said when the coalition hears of a vacancy, “If we don’t get to it within maybe 10 minutes, it already has upwards of 10, 20, 30 applications from folks in the market looking for somewhere to live.”

In the short-term, Morales said programs like federal rental assistance help, particularly with the eviction ban no longer in place. But in order to ultimately solve the issue, Maine needs to build more housing — at least 1,000 new units a year — she explained. She added that such construction should be augmented with support systems at the municipal level to keep people housed.

Failing to make those necessary investments in housing will have serious ramifications, Morales argued.

“Not having affordable housing for folks impacts every single one of our systems, and it’s more expensive to keep people in a housing insecure or homelessness state than it is to house them,” she said. “And that’s the message I think we need to continue to send: that this investment is a smart investment. It’s good for the economy, it’s good for human impacts of health and education, it’s good for every single one of our systems.”

What climate action looks like in a small, island tourist town in Maine

Home price and volume up in June