SINGAPORE — Shares in Asia-Pacific fell on Wednesday morning after overnight losses saw the tech-heavy Nasdaq Composite sliding to a fresh low for 2022.

Australian stocks also traded in negative territory, with the S&P/ASX 200 0.46% lower. Australia’s consumer inflation data for the first quarter is set to be out at 9:30 a.m. HK/SIN on Wednesday.

Technology stocks in the region declined in Wednesday trade, with shares of Japanese conglomerate SoftBank Group falling 3.93%. In South Korea, shares of Samsung Electronics dropped more than 1% while Krafton shed 3.22%.

That mirrored steep losses seen by their peers stateside overnight, with the Nasdaq Composite dropping 3.95% to 12,490.74. The index now sits deeper in bear market territory, at around 23% off its high.

Elsewhere, the Covid situation in mainland China may continue to weigh on investor sentiment regionally as authorities stick to a zero-Covid policy. Mass testing recently began in China’s capital city of Beijing after a spike in Covid cases was reported over the weekend. That comes as much of Shanghai remains under prolonged lockdown.

“The fear that Beijing is about to join Shanghai in lockdown is palpable,” Ray Attrill, head of foreign exchange strategy at National Australia Bank, wrote in a note.

China’s industrial profits for March is set to be out at 9:30 a.m. HK/SIN on Wednesday.

The Japanese yen traded at 127.27 per dollar, stronger as compared with levels above 128.1 seen against the greenback earlier this week. The Australian dollar was at $0.7143 , off levels above $0.72 seen yesterday. 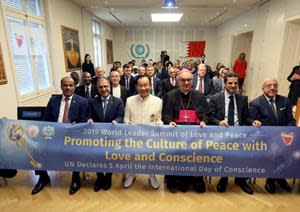 FOWPAL Invites Everyone to Endorse Declarations of Conscience and Peace