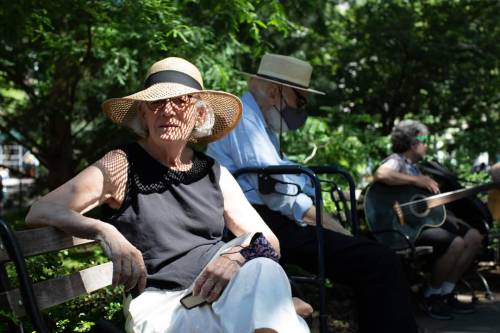 “I’m really proud that I’m still interested. Not ‘interesting’, that’s a different thing. I mean interested. I’m still interested in the world. ‘Interested’ feeds me, and if that makes me interesting, then great. Quite frankly this year has been a delight. I’ve been using a lot of Zoom. I’m zooming everywhere. To places and topics that I would never have discovered pre-pandemic. And all without dealing with people. Don’t get me wrong, I like people. I just don’t like hundreds of them. There’s a series I recently found called the California Scholar’s Program, it’s 200 separate lectures of astonishing content related to a Jewish universe. It was a local thing before the pandemic. They’d do programs at various synagogues in Southern California. But not anymore. Now they’re zooming. They recently gave a presentation on a photographer who documented Hasidic families reconstituting themselves after World War II. The photographs were luminous. And I watched the whole thing while drinking a glass of wine. At 3 PM today the Natural History Museum is zooming a lecture on spies. It’s on my calendar. And there’s another one tonight about the TWA Terminal at LaGuardia Airport. I’m actually missing one right now, about cassowaries. They’re really big birds from the island of New Guinea. They’re almost like ostriches, but with incredible neck colorations. And it’s an entire lecture comparing them to modern dinosaurs. I really wanted to see that one, but the weather was so nice. So I came to the park. Had it been raining, it would be cassowaries. But it’s beautiful, so I’m here. With an exquisite book about London during the English Civil War.”

Don’t Miss Victor, a Mediterranean Restaurant Near the Gowanus Canal

A Running List of New Restaurants That Opened in New York City, June 2021