Hong Kong Chief Executive Carrie Lam will not be pursuing a second term in office, she said during a press conference on Monday.

“This is not a question of evaluating my performance or the performance of the Hong Kong SAR government in this term. This is a question of my personal wish and aspiration,” Lam said in response to a question on why she would not run for the upcoming chief executive election.

She said her decision is “entirely based on” her family considerations. Lam is married with two sons.

“This is what I have told the Central People’s government, and they have expressed understanding,” she said.

“So I am taking this earliest opportunity to inform the public through the media that I would not contest in the coming chief executive election,” she added.

The nomination period began on Sunday, and the election is set to take place on May 8. The election was earlier postponed due to a surge in Covid cases in the Chinese city.

Hong Kong is a special administrative region of China governed under the “one country, two systems” framework. The city has limited election rights and a mostly separate legal and economic system.

Chief executives are elected every five years, and Lam’s term was plagued by local and global crises.

In June 2019, Hong Kong experienced political unrest as tens of thousands of pro-democracy protesters took to the streets over a proposed bill that would have allowed people in the city to be extradited to mainland China. The protests lasted for months, and sometimes turned violent — and some called for Lam’s resignation.

The bill was eventually withdrawn, but within months, China passed a national security law for Hong Kong. Lam said at that time the bill was aimed at prohibiting secession, subversion of state power, terrorism activities and foreign interference, but critics — including the U.S. and the U.K. — said it would undermine Hong Kong’s autonomy.

Lam also oversaw the city’s management of the Covid-19 pandemic, with Beijing adopting a zero-Covid stance and Hong Kong trying to remain as an international financial hub despite strict rules on travel.

Lam was in public service for more than 36 years before she became Hong Kong’s chief executive in 2017.

Before Monday’s announcement, she had avoided questions on whether she would run for a second term.

Speaking to CNBC’s Emily Tan on January 2021, she declined to answer when asked about a reelection bid. Instead, she said: “I just try to comfort myself that very often, women are being left to do the most difficult job. And I happen to be one of them.” 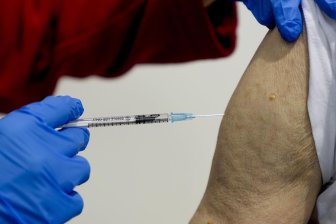