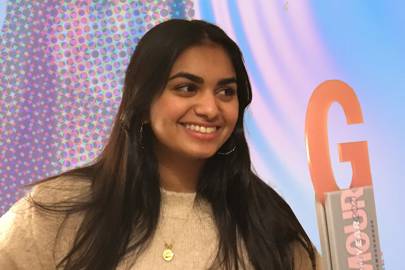 Amika George was just 17 – still in high school – when she decided to take on the government and change the course of period poverty in the UK forever.

Our Women of the Year 2021 Justice Gamechanger successfully campaigned for free period products to be available in schools across the country, something the government brought into effect in January 2020.

The founder of the Free Periods movement has since been named as one of Time magazine’s most influential teens and she also won the Gates Foundation Goalkeepers Campaign Award that brings together global leaders to help accelerate progress toward ending poverty and fighting inequality – not a bad feat for the now 21-year-old.

After a long-fought campaign to secure free period products in schools, why have 60% still not claimed theirs?

Here, the winner of GLAMOUR’s Justice Gamechanger Award discusses how that first #FreePeriods protest changed her life and how the stigma surrounding periods has lifted.

Q What has been the biggest gamechanging moment in your life?

A It was when I stood at the Free Periods protest in Central London one cold December evening, and looked out at the 2,000 passionate teenagers in the crowd, dressed top to toe in red, and holding huge banners emblazoned with period puns. Until that point, Free Periods had just been me, and the support I had received through social media had never felt as tangible as it did that day. I remember standing on the stage, completely overwhelmed by the fact that everyone was there because they wanted to see an end to period poverty as much as I did. Looking back, that was the moment I realised that Free Periods could never have succeeded without the incredible community of activists who turned up, shouted about it on social media, and helped spread the message in their workplaces and schools. That sense of being uplifted and sustained by a community is such an empowering feeling in activism, and the Free Periods protest was the most amazing expression of that.

Q What’s the biggest challenge you have faced personally or professionally and how did you overcome it?

A For me, it was taking on a subject that no one wanted to talk about! When I first started Free Periods, I don’t think I quite realised how entrenched in stigma and shame menstruation was. When people would ask me what I was campaigning for, and I mentioned the word ‘period’, I’d be met with silence and bewilderment, at best, and I realised quite quickly that trying to end period poverty was going to be hugely challenging. I knew that to end the injustice of period poverty, it was imperative that we normalised conversations around periods, but there was very little interest in talking about something that, to me, was simply a natural biological process. But periods were off-limits. I decided to write about periods, and period poverty, as much as I could, without shame, without embarrassment, and along with so many other activists in the period equity space, we were unapologetic and brazen. It wasn’t easy, but within a year or so, periods were everywhere!

Q What was a turning point for you in using and finding your own voice?

A I started Free Periods when I was at school, and I’d be constantly dismissed by adults who weren’t interested in what I had to say as a teenager. I’d be invited to speak about period poverty or gender equality, and I’d look around a room and see that I was the only teenager in a room of adults – I could often sense that I was being written off before I’d even got started. That was incredibly frustrating.

But I knew that what I was saying couldn’t be ignored. What I did was try and make it hard to be dismissed by teaming with other people who felt that period poverty must be eradicated. Together, we were able to relentlessly persist and project our voices so much louder than on our own. I found that my own confidence grew in knowing that there were thousands like me, who felt the same urgency and in combining different ideas, resources and viewpoints, we enriched the Free Periods campaign enormously.

Q Who is your gamechanging hero?

A Arundhati Roy is an indomitable, fearless Indian author and poet. She’s written the Booker Prize-Winning God Of Small Things, one of my favourite books, set in Kerala on India’s south-west Coast, where my grandparents are originally from. She has written blistering commentaries condemning the caste system in India, despite being mercilessly hounded and vilified by a very hostile Indian press and against the backdrop of several legal actions taken against her for speaking out. I’ve always admired her refusal to abide by conventional norms in an era where social and cultural conventions were never questioned. I love that she had a stint living on a beach as a fruit-juice seller before she started out as an author. Not the usual trajectory for a middle class Indian woman of that time!

Q What advice would you give to other women hoping to make change in their own pocket of the world?

A Often, we don’t recognise the power we have in our voices and actions, and it’s only when we start to do something that we realise how much we can do with what we have, and how much we can achieve when we focus on something that really means a lot to us. So many of us, including me, are far too self-critical and plagued with self doubt – incidentally, I think this is something that men suffer with a lot less – and we just often don’t even get going because we are so fearful of getting it wrong. If that’s you, I would say to do something small despite your fear of failing, then do something bigger, and keep going, pushing yourself forwards a little more every time.

Q What would be your one gamechanging piece of advice?

A Ensure that anti-racism is a central feature of your everyday. We all need to interrogate the structures, cultures and conversations in which we all engage, and we need to actively amplify and uplift the voices of those who don’t share the same privileges as us. I think it’s really critical that we read and educate ourselves about Black and minority communities so we can call out casual racism, micro-aggressions, and more overtly racist comments, online and IRL.

More broadly, ensure that your activism isn’t perpetuating the exclusion of already marginalised groups. When I started Free Periods, I will admit that I was naive about inclusivity and my campaign only targeted ‘girls’ who were suffering from period poverty. I will always remember an email I received from a trans boy who told me how excluded he felt when he read about periods being exclusively something experienced by women or girls. It really upset me, and I immediately changed Free Periods’ messaging to say ‘children’ or ‘students’ instead of ‘girls’, and we lobbied for universal access for all.

We all have the power to change the world for the better in this era of new-age activism. Here’s how…

Q It’s GLAMOUR’s 20th anniversary. In that time what is the biggest development you’ve seen in your field? How much further do we still have to go?

A We’ve made giant strides forwards in terms of gender equality and empowerment of women and girls over the last two decades and I am filled with so much optimism for what lies ahead. We have seen pledges made by countries across the globe to prioritise education for those students who are hardest hit by period poverty. In the UK, we have convinced the government to provide free period products to all students in all schools which is something we couldn’t have imagined a decade ago. At Free Periods, we are working to encourage all schools to sign up to the scheme (it’s opt-in unfortunately, and less than 50% of schools have signed up so far!), and we need every school in the country to sign up so that no child in England misses out on their education because of their period.

Q What is your hope for women in terms of all that you campaign for – and for women in general – in the next 20 years?

A I’m concerned that Coronavirus has dialled back progress made on gender equality. Quite a few reports have signalled that women have been hardest hit, so there’s a huge amount of work to do ahead of us. Across the globe, I’m concerned about the rise in child marriage. Save the Children has warned that the pandemic has driven a surge in child marriage as families are pushed to the brink of poverty, with daughters being married off to relieve financial burdens. But as we come out of the pandemic, I’d love to see women across the world standing up for each other, fighting for causes that matter to us with increased confidence and conviction. I’d like to see feminist activism be part of our everyday, existing alongside our work and education, so we can create the change we want to see, without waiting for anyone else to do the work.

You can rewatch the first-ever virtual GLAMOUR Women of the Year Awards and discover all our amazing winners here.

Lonnie Holley’s Life of Perseverance, and Art of Transformation

What to Expect From William and Kate’s New YouTube Channel

Languishing: The Mental Health Affect We’re All Feeling In The Coronavirus Pandemic

Rome jury convicts 2 US friends in slaying of police officer