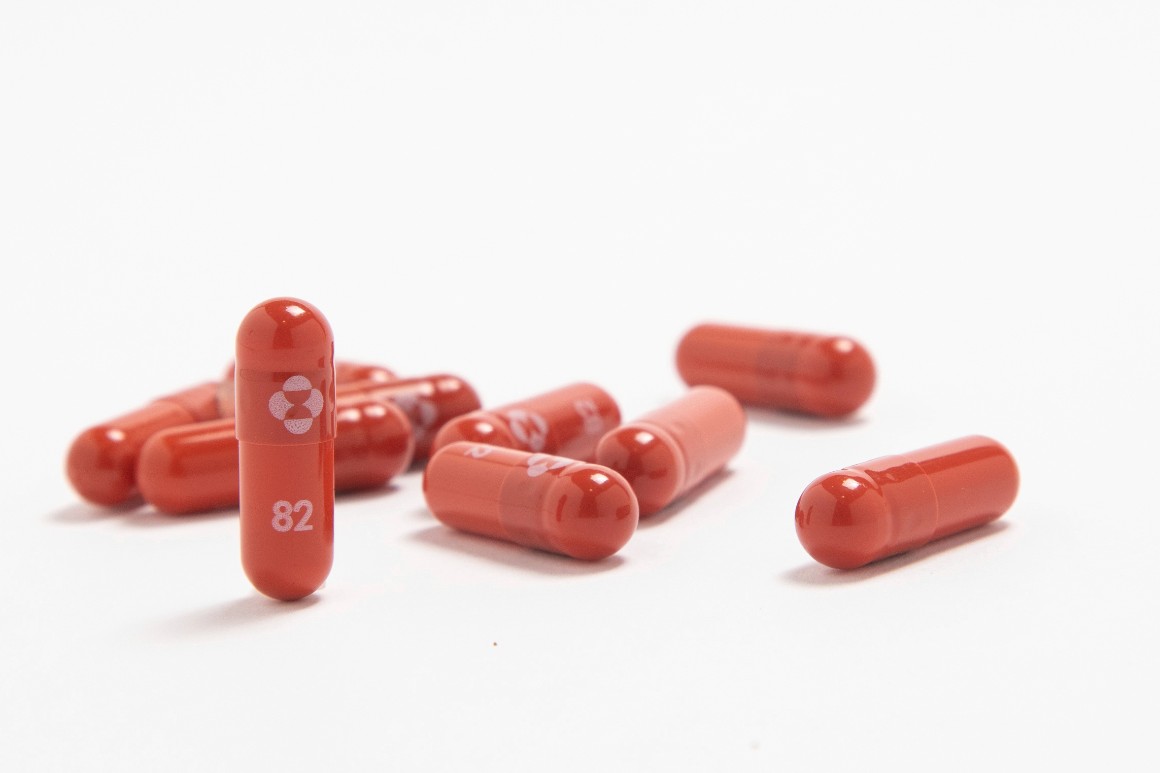 “I’m not sure this is really the one we’ve been waiting for, but it’s the one we’ve got at the moment,” said John Coffin, a microbiologist at Tufts University, who voted in favor of authorizing the drug.

“I would use it in high-risk, non-vaccinated individuals,” said Michael Green, an internal medicine physician at the Children’s Hospital of Pittsburgh, who also voted in favor. He expressed a concern over a lack of other options for patients, especially if monoclonal antibodies are less effective against newer mutations of Covid-19.

Jennifer Le, a clinical pharmacologist at the Skaggs School of Pharmacy and Pharmaceutical Sciences, voted against, citing some of the safety signals seen in these trials, especially paired with the small study size and its modest benefit. She said that she would need to see a larger clinical trial before voting in favor of it in the future.

An interim analysis of late-stage clinical trial results showed that a round of treatment with molnupiravir cut hospitalization rates in half, though additional data released last week suggested efficacy is closer to 30 percent. Still, the pill is a potential breakthrough for managing the pandemic, offering the prospect of an at-home treatment option for those at risk of developing severe disease.

“The efficacy of this product is not overwhelmingly good,” said David Hardy, a scientific and medical consultant and adjunct professor at the Charles R. Drew University School of Medicine and Science in Los Angeles. He also pointed out that in this particular study, the efficacy appeared to decrease as more participants were enrolled in the study.

Many advisers said they wanted to see the agency put limits on who could receive the drug and limit it to those who are defined by the Centers for Disease Control and Prevention as being at a high risk of developing severe Covid. Some also suggested that they wanted to see stricter guidelines, limiting the criteria to the smaller list of conditions included in Merck’s late-stage clinical trials.

“This was a very difficult decision for me. I literally toggled back and forth, as I know everyone has on this,” said Roblena Walker, the CEO of a public health monitoring company Georgia, who backed the drug for emergency use. She believes that there’s a question of access for patients, who would have to go through a doctor to get a prescription. “I don’t think this study did full justice or really took into consideration that minority population that may not have full access to a primary care physician in order to receive a prescription in order to take the drug aside from going to an emergency room,” Walker said.

Many voting members suggested the emergency-use authorization should be revisited if another comparable therapeutic with better efficacy and safety comes out. Pfizer also has a Covid-19 antiviral pill and is seeking FDA authorization for the treatment. The agency has not yet set a date for its external committee to discuss it.

The panel recommended limiting molnupiravir for people who are pregnant or nursing, unless a person’s health care provider believed the benefit outweighed the risk. Although pregnant individuals were excluded from clinical trials, data from animal studies suggested that it may lead to miscarriages or birth defects.

“There’s no circumstance in which I would advise a pregnant woman to take this drug,” said James Hildreth, the president of Meharry Medical College in Nashville.

“I think the best course of action has to be to provide as much information as we can as soon as it becomes available, and keep it updated,” said Janet Cragan, a medical officer in the division of birth defects and infant disorders at the CDC. The FDA needs to provide discussion points to providers and patients and, because the risks are so high, she said, “I think the final decision has to come down to the individual woman and her care provider.”

Background: Molnupiravir would be the first pill authorized to treat Covid-19 and the first therapy to be cleared for mild cases. All other authorized Covid-19 treatments must be administered in a health care setting for more severe forms of the disease. The hope is that these pills, which are generally easier to manufacture, could reduce the burden on hospitals by keeping individuals safer.

What’s next: The FDA will decide whether or not to authorize the drug, and which populations should receive it. The agency doesn’t have to side with its advisory committee, but it frequently does.

Lauren Gardner contributed to this report.

Recycled live ammo may have been on ‘Rust’ movie set amid fatal shooting: documents – National