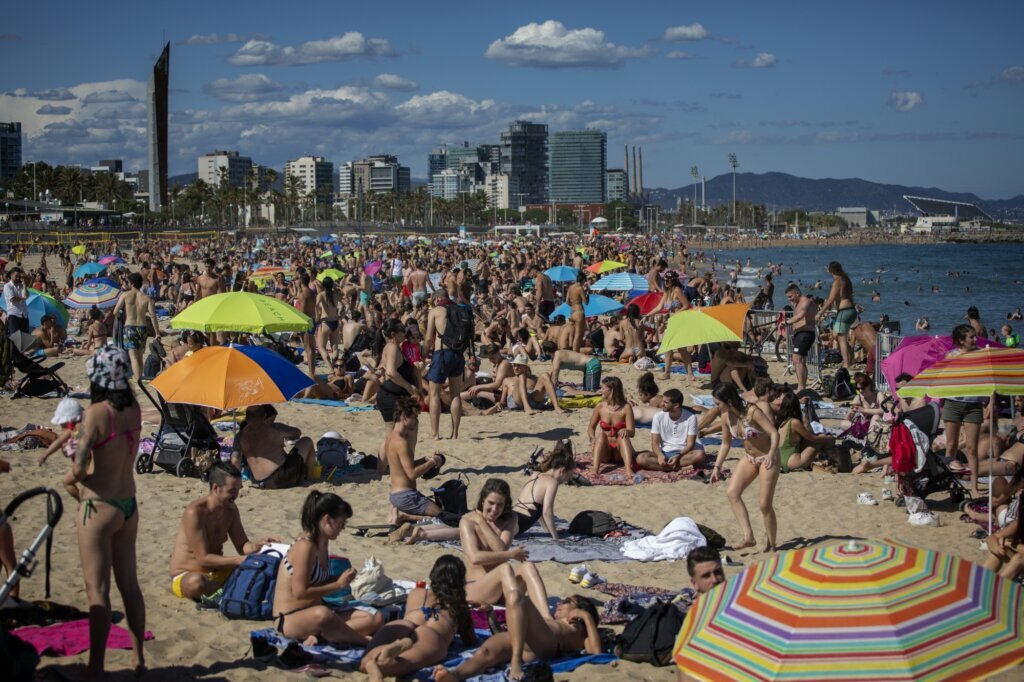 BERLIN (AP) — Mallorca’s first tourists in 93 days touched down Monday, saying they feel safe in the popular Spanish island and ready to make the most of the beach and sunny weather without the hordes of visitors found there in normal times.

As borders opened up across Europe three months after closures that began chaotically in March, Spain prioritized the entry of a first batch of thousands of Germans who were allowed to fly to its Balearic Islands. The country waived its 14-day quarantine to test out with them the best practices in the coronavirus era.

Spaniards themselves are still not allowed to travel to the archipelago and it will take one more week for the rest of country, one of the hardest hit by the pandemic in Europe, to catch up with other countries in the region, where border checks dropped overnight on Monday..

The European Union’s 27 nations, as well as those in the Schengen passport-free travel area, which also includes a few non-EU nations such as Switzerland, aren’t expected to start opening to Americans, Asians and other visitors from outside the continent until at least the beginning of next month, and possibly later.

Announcing Monday’s reopening of borders and Paris restaurants, French President Emmanuel Macron said it’s time “to turn the page of the first act of the crisis” and “rediscover our taste for freedom.”

But he warned: “This doesn’t mean the virus has disappeared and we can totally let down our guard. … The summer of 2020 will be a summer unlike any other.”

That caution is widespread after more than 182,000 virus-linked deaths in Europe. The region has had more than 2 million of the world’s 7.9 million confirmed infections, according to a tally by Johns Hopkins University.

Even so, social distancing was in short supply as London’s Oxford Street shops reopened and crowds jammed the entrance to London’s Niketown store despite efforts by employees to have an orderly line. Paris bistros like Café Des Anges welcomed back regular customers.

“It’s very hard to get people who are sitting at the bar to respect social distancing,” said cafe manager Virgile Grunberg. “People have missed this, because they come in every morning before work, have a little coffee and a discussion, so of course it’s part of Paris.”

The need to get Europe’s tourism industry up and running again is urgent, especially for Mediterranean nations like Spain, Italy and Greece, as the economic fallout of the crisis mushrooms.

In a sign of that anticipation, workers in a Mallorca hotel welcomed with cheers the bus ferrying the first guests from the airport. The visitors had gone through temperature checks on arrival and had to leave their contact information and health status registered with authorities.

“We are totally happy that we can get out,” said Martin Hofman, who traveled on the first flight from Duesseldorf, adding that his holiday couldn’t be postponed “and to stay in Germany was not an option.”

Daniel Borgerding, who squeezed in the last-minute visit before his wife is due to give birth, said the couple was looking forward to having “a quiet and relaxed time, empty beaches, restaurants, bars and a little more space than usual.”

Regional officials have expanded the capacity of the archipelago’s health system in case any tourists shows signs of infection. They said the lessons from the trial in the islands will be taken into account for the country’s full re-opening.

“We have got the pandemic under control, (but) the reopening of our frontiers is a critical moment,” Spanish Prime Minister Pedro Sánchez said over the weekend as he announced he was bringing forward Spain’s opening to European travelers by 10 days to June 21. “The threat is still real. The virus is still out there.”

“A lot will depend on whether people feel comfortable to travel and whether we can project Greece as a safe destination,” Greek Prime Minister Kyriakos Mitsotakis acknowledged.

Europe’s reopening isn’t a repeat of the chaotic free-for-all in March, when panicked, uncoordinated border closures caused traffic jams that stretched for miles.

Still, it’s a complicated, shifting patchwork of different rules, and not everyone is equally free to travel everywhere. Norway and Denmark, for example, are keeping their borders closed with Sweden, whose virus strategy avoided a lockdown but produced a relatively high per-capita death rate. Other nations also have travel restrictions for Swedes.

In an interview with state broadcaster SVT, Prime Minister Stefan Lofven rejected the idea that Sweden’s strategy had failed, citing a continuing decline in hospitalizations and fatalities. While the rate of new infections has increased, officials say that reflects a long-delayed increase in testing.

German drivers queued up in long lines Monday to cross into Denmark, which is letting in German visitors but only those who have booked accommodation for at least six nights.

Britain, which left the EU in January but remains closely aligned with the bloc until the end of this year, only last week imposed a 14-day quarantine requirement for most arrivals, horrifying its tourism and aviation industries. As a result, France is asking people from Britain to self-quarantine for two weeks and several other nations are not letting British tourists in during the first wave of reopenings.

With flights only gradually picking up, nervousness about new outbreaks abroad, uncertainty about social distancing at tourist venues and millions facing record unemployment or pay cuts, many Europeans may choose to vacation at home.

German Chancellor Angela Merkel and Austrian Chancellor Sebastian Kurz are both planning to vacation in their homelands this year.

“You can go abroad for your holiday again,” Foreign Minister Stef Blok said. “But it won’t be as carefree as before the corona crisis. The virus is still among us and the situation remains uncertain.”

Aritz Parra in Madrid contributed to this report.

Food and Travel Bloggers – What Can We Do in the Name of Equity and Justice?

Food and Travel Bloggers – What Can We Do in the Name of Equity and Justice?