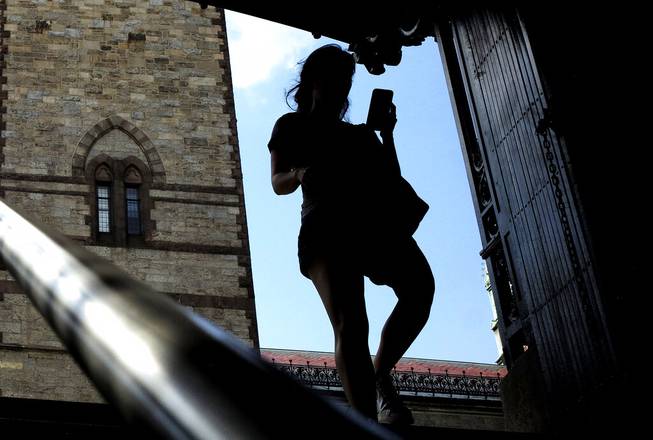 A passerby uses a mobile phone in 2019 while entering a subway station in Boston. Despite measures trying to stop illegal robocalls, the torrent of unwanted calls from telemarketers and scammers continues to rise.

• Place your number on the national do not call registry by calling 888-382-1222 or visiting donotcall.gov.

• Research smartphone applications or services that can help limit robocalls. One of the more popular services is YouMail.

• If you answer a robocall, hang up as soon as you realize it’s from a questionable source. Make sure to not respond to questions or prompts.

• If you receive a robocall, submit a complaint to the FCC or the Nevada Attorney General’s Office.

It’s a routine annoyance for almost anyone with a mobile phone.

A call comes in from an unfamiliar number, but instead of a person on the line, it’s a recorded sales pitch, or worse, a scam message attempting to gain personal information or money.

The calls may be coming from anywhere, but they often show up as local numbers — a practice referred as “spoofing” — in an attempt to entice people to answer their phone.

In 2020, Nevadans received some 525 million robocalls, the sixth-most of any U.S. state, according to a report last month by the consumer advocacy website WhistleOut.

Nevada Attorney General Aaron Ford and his office are fighting back.

“These robocalls not only posed an annoyance to consumers but also tricked Nevadans into giving their money over to what they thought was a charitable organization,” Ford said in a statement last month. “My office is committed to shutting down these types of fraudulent robocalls who prey on our residents.”

Before Nevada, the states most often targeted by robocalls last year were Arizona, Maine, Virginia, Maryland and Delaware, according to WhistleOut. Alaskans got the fewest robocalls, the group said.

Not all robocalls are illegal. Those from health providers, political organizations, certain government agencies and other sources, such as a homeowner’s association, are perfectly legal.

If the caller, however, is asking for money or trying to sell something to a person they don’t have an existing business relationship with, that’s illegal.

“The technology that these bad actors are calling from is hard to pin down,” Newman said. “We’re trying to combat this problem partly with consumer education.”

Ford is also part of a coalition of state officials calling on USTelecom, a trade group that represents telecommunications companies and agencies, to enhance technology to stop illegal robocalls.

In February alone, Americans received more than 4.6 billion robocalls, according to the robocall-blocking smartphone app YouMail.

Kathleen Foster, director of core network engineering and services for cellular provider T-Mobile, said the number of unwanted robocalls are on the rise.

“Between the pandemic and tax season, scam calls have become even more prolific, so it’s more important than ever to take proactive steps to protect yourself,” Foster said.

According to the Federal Communications Commission, there are several steps consumers can take to combat robocalls, firstly putting their numbers on the national do-not-call registry.

Apps like YouMail can be downloaded to block unwanted calls. And the FCC advises consumers to not interact with robocallers — don’t give out any information or press any numbers on the phone’s keypad if prompted.

Absinthe celebrates 10 years as a Las Vegas rite of passage

It’s more affordable and more difficult to get mortgage

It’s more affordable and more difficult to get mortgage

Absinthe celebrates 10 years as a Las Vegas rite of passage