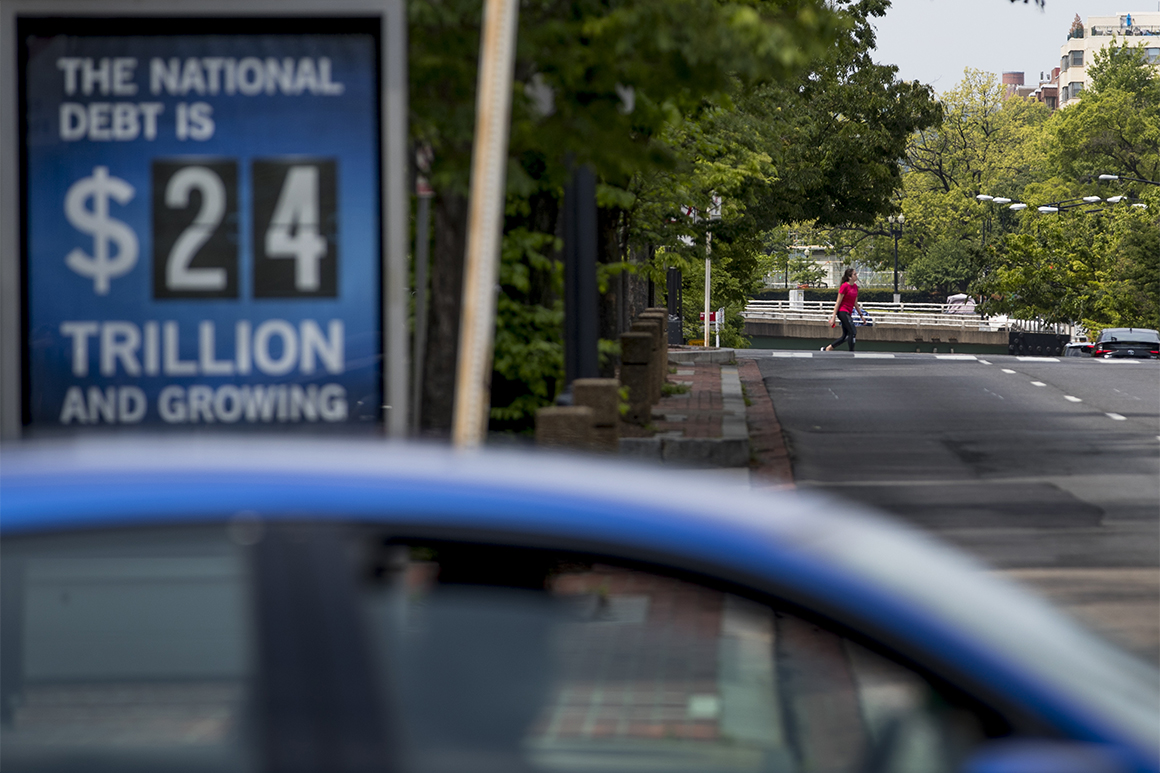 “Nobody blinks in the short run. But at the end of the day, we have to raise the debt limit,” said Rep. Don Beyer (D-Va.), who chairs the Joint Economic Committee. “But it could be after dinner on Sept. 30.”

Government funding runs out in just 18 days, and the Biden administration says the debt ceiling must be raised shortly after that — with Senate Republican votes that GOP leaders say they will not provide. What’s more, the House doesn’t come back until Sept. 20, which leaves precious little time to keep the trains running, all as President Joe Biden faces the worst approval ratings of his young presidency.

House Democrats are planning a vote the week of Sept. 20 to likely extend government funding until Dec. 10 and have discussed rolling the debt ceiling, disaster aid and assistance for the Afghanistan withdrawal into it, according to aides. They hope pairing the debt limit with a bill to avoid a government shutdown, as well as disaster relief, makes it impossible for Republicans from impacted areas like Louisiana and Mississippi to vote no.

No final decision has been made, and success is far from guaranteed. But even with unilateral power to deal with the debt ceiling themselves, Democrats say they don’t want to set the precedent that one party is expected to address the debt limit when they are in charge.

Republicans “voted in many cases for the programs and tax cuts that they gave under the Trump administration that contributed to the debt. So they have to be equally as responsible,” said Sen. Bob Menendez (D-N.J.) “Because if we start at a process in which both sides won’t come together to deal with the debt ceiling, then whenever there is a different majority they will face the same challenge.”

Speaker Nancy Pelosi and Senate Majority Leader Chuck Schumer (D-N.Y.) have vaguely referred to having several options to raise the debt ceiling, but have been adamant that they won’t stick it in a bill that passes on party lines via budget reconciliation. Instead, they will demand GOP support, which Republicans say simply won’t materialize because of Democrats’ big spending agenda.

Rather, Senate Republicans say Democrats should just increase the debt ceiling on party lines as part of their plans to spend as much as $3.5 trillion on education, climate change and health care while raising taxes on the wealthy. But that solution isn’t workable at the moment either: Several moderate Democratic senators are not willing to support a unilateral increase in the debt, according to a Democratic aide.

Those Democrats want Republicans to own increasing the debt, too, considering significant spending was wracked up under former President Donald Trump. And Democratic leaders nixed the idea of coupling the reconciliation bill and the debt ceiling last month amid worries that it would further hamper passage of their already labyrinthine social spending plan.

Democrats’ options include tying the debt ceiling increase to a short-term government funding bill — marrying it with hurricane aid and help for Afghani refugees — or holding a standalone vote and daring Republicans to reject it. They could also try negotiating with the GOP to combine some Republican priorities, such as defense spending, with a debt ceiling increase. When they were in the minority, Democrats helped former President Donald Trump lift the debt ceiling by cutting larger budget deals with the Republicans.

“I would hope that the Republicans would act in a similarly responsible way,” Pelosi told reporters. “People say, ‘Oh, you just want to spend money.’ No, we’re paying the credit card, the Trump credit card, with what we would do to lift the debt ceiling.”

But Republicans are holding their hard-line stance as Congress prepares to end its lengthy August recess. In an interview with the Louisville Courier-Journal this week, Senate Minority Leader Mitch McConnell (R-Ky.) said: “The debt ceiling needs to be raised. The issue is who should do it.”

“Under these uniquely unprecedented circumstances, it’s [Democrats] obligation to do it. And they have the votes to do it, and they will do it at some point,” McConnell said.

“We Democrats, when Trump was president … three times voted to raise the debt ceiling. We could have played the same game. But we realized that we have some obligations to the country and to the financial strength of this country, and not just by politics,” Schumer told reporters.

For Democratic leaders, the collision of deadlines approaching at the end of this month promises a September showdown that rivals any previous shutdown threats and funding headaches Congress has faced.

Democrats are quickly trying to advance their massive social spending plan, a key plank of Biden’s domestic policy agenda, before turning to the more routine work of funding the government and covering the nation’s debt obligations.

Pelosi and her leadership team are trying to balance the demands of the caucus’ two competing factions — the progressives and the centrists — as they work to enact both the sweeping social plan and the Senate-passed bipartisan infrastructure bill later this month.

Progressives have vowed not to support the Senate’s infrastructure bill during an expected vote on Sept. 27 unless the much larger social policy legislation is also teed up for a vote.

Democrats publicly insist they’re on track to vote for the up to $3.5 trillion bill in the House later this month. But senior Democratic aides are already privately predicting that timeline is likely to slip several weeks as House leaders continue to face off with Senate Democrats and the White House over major policy disagreements.

And, as they face those internal challenges, a major partisan confrontation with Republicans awaits on the debt.

“The full faith and credit of the United States is on the line, and we need to do our jobs,” said Sen. Tammy Baldwin (D-Wis.), who like many senators has been focused more on the social spending bill over the August recess than the upcoming deadlines. “I’m not as well-versed in what vehicle would be the best. But the job needs to be done.”

Marianne LeVine contributed to this report.

China’s rumored aims to dive into Afghanistan are exaggerated: experts

Opinion | Venus Williams on Mental Health: Being Tough Means Taking Care of My Whole Self