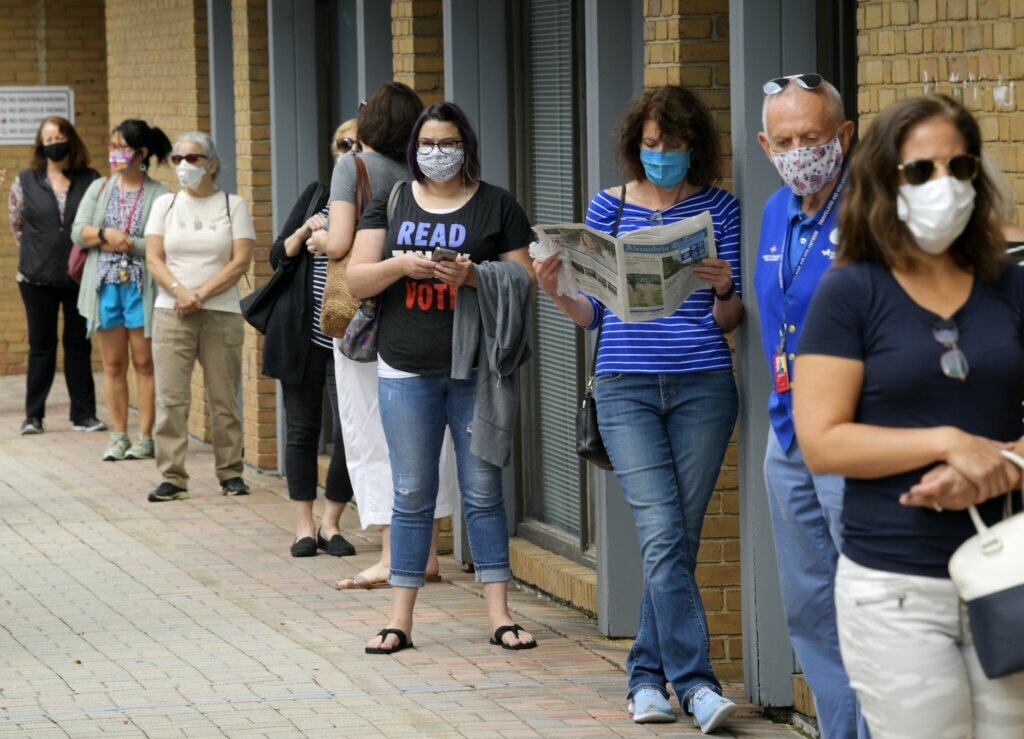 RICHMOND, Va. (AP) — An accidentally severed fiber optic cable that shut down Virginia’s online voter registration system for several hours Tuesday, the last day to register before the November general election, has prompted a lawsuit from a civil rights organization.

The Virginia Department of Elections said in a statement on Twitter that a “fiber cut” affected connectivity for multiple agencies, including the department’s citizen portal and registrar’s offices. The cable was inadvertently cut during a Chesterfield County roadside utilities project, according to the state’s information technology agency.

Six hours later, the Department of Elections issued a statement saying the portal was back online. But the fallout led to concerns that voters were being disenfranchised at a crucial moment.

Voting advocates said the accident couldn’t have come at a worse time and lambasted state officials for the technological failure. The day of the deadline is when many Virginians decide to register, particularly after being reminded on social media and in the news.

The Lawyers’ Committee for Civil Rights Under Law filed a lawsuit Tuesday night saying voter registration must be extended for 48 hours and that the state should make “a significant effort” to tell the public about the change. Named as defendants in the lawsuit are the Virginia Department of Elections; the Virginia State Board of Elections; elections board chairman Robert H. Brink and vice chairman John O’Bannon; Christopher Piper, commissioner of the Department of Elections; and Jamilah D. Lecruise, secretary of the board of elections.

“Absent relief, voters who attempted to register to vote through the online portal on October 13, 2020, but were unable through no fault of their own, will be absolutely disenfranchised in the upcoming elections,” the lawsuit said.

If the deadline isn’t extended, the lawsuit said, “Plaintiffs themselves will be prevented from helping citizens register to vote through the online voter registration system, frustrating their core mission and activities in advancing that mission, and thereby disenfranchising those citizens in the coming general election.”

Kristen Clarke, president and executive director of the Lawyers’ Committee for Civil Rights Under Law, said in a news release that Virginia “failed the public and it must grant a significant extension to ensure all Virginians are given an equal opportunity to exercise their fundamental right to vote.”

Democratic members of Virginia’s congressional delegation had called for a 72-hour extension.

U.S. Reps. Don Beyer, Gerry Connolly and Jennifer Wexton said in a statement that they “hope the courts will swiftly grant such an extension” and account for the time it will take to inform the public of a new deadline.

Virginia Gov. Ralph Northam said at a press conference that he supports extending the deadline. But he said it appears that only the courts have the ability to change it.

Northam, a Democrat, said the state did not have a backup plan for this particular cable and the episode shows the need for the state to continue its efforts at creating a secure network.

“Obviously, we still have a lot of work to do,” Northam said.

Secretary of Administration Keyanna Conner said the cut occurred on a 10-gigabit optical fiber circuit that was installed this spring to help the state handle increased web demand during the coronavirus. She said backup circuits aren’t as large as the main circuit, but plans are in place to upgrade them.

Virginia, which has 13 electoral votes, is not considered a marquee battleground state in the presidential race by political observers. But three congressional races are considered highly competitive, and their outcomes could affect the makeup of the U.S. House.

Democratic freshmen Reps. Abigail Spanberger and Elaine Luria are facing tough challenges in the 7th District and 2nd District, respectively, and the 5th District seat is open. The races in the 2nd and 5th districts are considered a “toss up” by the Cook Political Report. Spanberger’s seat is listed as leaning Democratic.

While the site was down, people who wanted to register could still fill out applications in person. They could also mail paper copies, as long as they are postmarked Tuesday, said Vicki Lewis, the voter registrar for the city of Newport News. People who wanted to vote early were given provisional ballots, which will be counted the day after this year’s Nov. 3 election.

This isn’t the first time technical problems affected Virginians’ ability to register to vote under a looming deadline.

In 2016, an unknown number of people were not able to register because of unprecedented demand, in part because of social media postings reminding people of the registration deadline that year.

A voter advocacy group, the New Virginia Majority Education Fund, sued for an extension and a federal judge granted a brief one to make up for the computer glitches that occurred.

This story has been corrected to show it was a 10-gigabit cable, not 10-gigabyte.

A Fawn Was Stuck in a Fence in Arlington. Two People Had to Pry the Bars Open to Rescue Her

Nearly 200,000 deaths, millions of ripples. Each covid-19 fatality shifts attitudes about the virus.