Cornyn’s in a unique position to get the votes on guns, not just because of the latest tragedy that struck his home state. He’s previously teamed up with Democrats on narrow background checks legislation — the most substantive gun bill to clear Congress in the last decade. Not to mention that the former whip wields major influence in a GOP conference where he’s widely viewed as a potential successor to McConnell.

A successful gun vote could boost Cornyn in any future race for Senate GOP leader. Yet the risks of failure are even clearer — and whatever bipartisan agreement that won’t go too far for Cornyn may not be enough for Democratic negotiators. Cornyn, who assured one home-state radio host this week that Second Amendment restrictions are “not gonna happen,” voted against expanding background checks in 2013.

Even if Democrats and Cornyn can meet in the middle on trying to stop the American scourge of mass shootings, he will then have to sell the plan to a GOP conference historically disinterested in gun policy reforms. Despite that skepticism, especially given the closeness of the midterm elections, senators on both sides of the aisle see Cornyn as a gun-talks linchpin.

“He’s critical,” said Sen. Chris Coons (D-Del.), a frequent negotiating partner of Cornyn’s. “His credibility as a conservative, as a Republican caucus leader, as a law enforcement leader from Texas … gives him the credibility to negotiate a balance between robust investment in mental health and some progress around gun safety.”

Cornyn and Sen. Chris Murphy (D-Conn.), another leading participant in the current talks, tried to reach a deal last year to expand the definition of a commercial gun dealer to no avail. The Texan suggested this moment could be different, given “the urgency of these repeated incidents” and concerns from law enforcement about copycat shootings.

But as “somewhat optimistic” as he is, Cornyn is aware of the long odds and not sounding like a centrist.

“When Sen. McConnell asked me to be sort of the point person on this, I thought to myself ‘well, this is like Joe Biden appointing Kamala Harris border czar,’ I accepted the responsibility with a little trepidation,” he recalled.

Negotiators are aiming to craft proposals soon and senators involved in the talks suggested their ideas could eventually merge. On both fronts, though, Senate Majority Leader Chuck Schumer has given deal-makers a relatively short deadline to reach an agreement.

Cornyn brings a record of modest wins to the discussions. He and Murphy worked together on narrow legislation to improve reporting by agencies and states to the federal National Instant Criminal Background Check System. That bill, a response to a 2017 Texas church shooting and a blueprint for Cornyn for the current gun talks, passed the following year as part of a broader government funding package.

And earlier this year, Cornyn and Coons passed legislation in the Violence Against Women Act that requires federal authorities to tell state and local law enforcement within 24 hours if a person barred from purchasing a firearm attempts to do so and fails a background check.

“He’s earnestly at the table,” Murphy said in an interview. “He’s made clear there’s only so far that he’s willing to go. But so far, the things on the table are incremental but significant changes.”

Among the proposals under consideration in this summer’s gun safety talks are changing the background check system, providing additional investments in mental health and school security, and giving grants for states to establish so-called red flag laws.

Cornyn declined to say what his “red lines” would be, but in the interview he expressed concern about mental health and the isolation of young people during the pandemic.

“I’m not talking about restricting the rights of law-abiding citizens under the Second Amendment,” Cornyn said. “I’m talking about identifying people with criminal and mental health problems that are a threat to themselves and others.”

Any package that comes together will be narrow, and won’t satisfy long-running calls from anti-gun violence advocates for the Senate to move on House-passed legislation establishing universal background checks. But Democrats like Murphy say at this point, Congress needs to break the logjam.

Sen. Cory Booker (D-N.J.), who worked with Cornyn on criminal justice reform, said he’s “hopeful” a deal will come to fruition but predicted that any agreement won’t be “to the level of what we are going to need to end the daily carnage.”

Cornyn’s leading role in the gun talks comes amid speculation about a future race between him, current Minority Whip John Thune (R-S.D.) and Sen. John Barrasso (R-Wyo.) to eventually succeed McConnell as Senate GOP leader, whenever the Kentuckian steps down. Clinching a deal with Democrats on an issue as elusive as guns could boost Cornyn’s national profile and his standing within the conference.

But it could also lead to pushback from fellow conservatives who don’t want to see any guns legislation pass the Senate.

Asked whether becoming GOP leader factors into his thinking, Cornyn replied: “That’s a long way off, and who knows whether it’s ever going to happen.” But he added that “if you’re not in the Senate in order to make a difference and make tough, politically challenging decisions which you know are the right thing to do, then you need to find another job.”

Cornyn said he’s aiming to see an equal number of Republicans and Democrats back any guns agreement he reaches and that he’d like the amount of support to be within the ballpark of the 70-plus co-sponsors who backed his 2018 legislation with Murphy. But getting 20 Republicans, let alone 10, won’t be easy.

And time is not on his side.

“Ten is a pretty tough number to get to, and there’s a window for senators who have engaged in this kind of work before to do so,” Coons said of Republican colleagues. “But we need them to step forward and to do so fairly soon.”

Just Wednesday, a gunman killed four people in Tulsa, Okla., prompting President Joe Biden to address the nation pushing again for Congress to act. The president, in fact, also sees Cornyn as critical; the senator’s staff is in touch with the White House on guns and Biden recently described the Texan as a “rational Republican.”

Sarah Ferris and Jordain Carney contributed to this report. 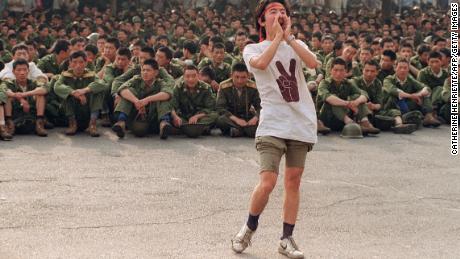 In Hong Kong, memories of China’s Tiananmen Square massacre are being erased

Can long Covid lead to death? A new analysis suggests it could