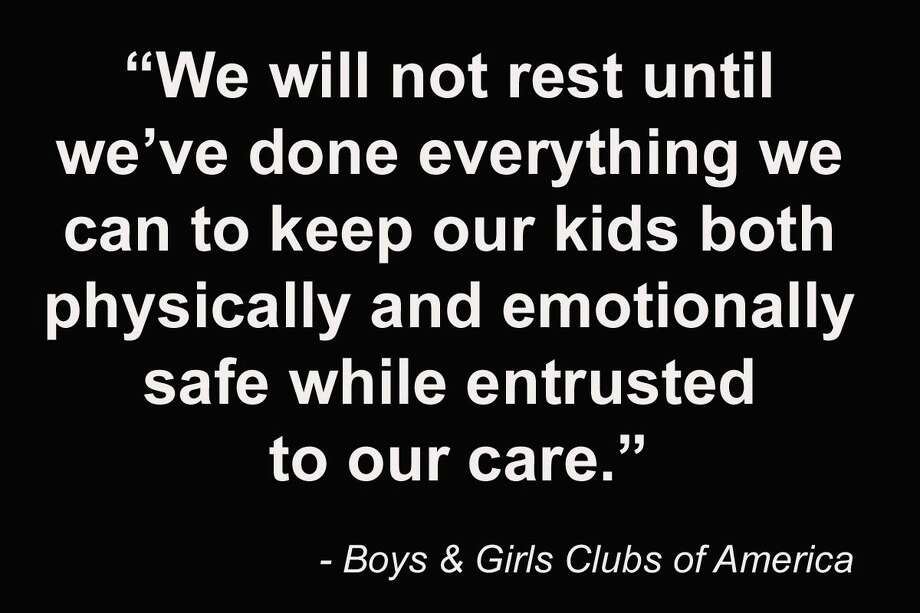 Local affiliates of Boys & Girls Clubs of America do not uniformly respond to reports of sexual misconduct according to a third-party review of the organization’s policies made public Tuesday.

While the organization has enhanced policies to prevent abuse over the years, its programming is not consistently implemented at local clubs, according to a summary of the review, conducted by law firm Alston & Bird and the nonprofit Rape, Abuse & Incest National Network.

The review, which has been in the works for nearly a year, was prompted by a six-month Hearst Connecticut Media investigation into allegations of child sex abuse connected to Boys & Girls Clubs of America affiliates across the country that found 280 people in 31 states
who say they were sexually abused as children by employees, volunteers and other members of the clubs.

“RAINN found that Clubs are not fully utilizing the national resources, training programs, or guidance currently offered by BGCA,” reads the summary of the report that Boys & Girls Clubs of America provided to the public. “Clubs are not fully executing a consistent and methodical response to reported incidents of sexual misconduct.”

The recommendations for change in the report include the organization developing a 3- to 5-year strategic plan to make “comprehensive, intentional, and measurable changes” at all of its clubs.

The Hearst investigation was spurred by three lawsuits against the Greenwich Boys & Girls club alleging ongoing sexual abuse there in the 1970s and 1980s.

Since last year, Hearst has found an additional 61 victims alleging sexual abuse and the investigation now includes clubs in 34 states. One new lawsuit was filed July 2 against the Greenwich club, and several lawsuits were filed against New York clubs under the Child Victims Act there, which extends the statute of limitations for child sexual abuse victims to come forward.

The national organization is currently named as a defendant in 15 pending sexual abuse lawsuits in state and federal courts, nine of which were filed in the past year. Some of the lawsuits claim that club leadership knew of the abuse, did not report it to law enforcement and allowed it to continue; that administrators at some clubs did not adhere to Boys & Girls Clubs of America safety guidelines or failed to conduct sufficient background checks.

There are also 12 pending criminal cases across the country against men who have in some way been affiliated with local clubs and stand accused of sexual misconduct. Several of those cases are set for trial this fall after having their court hearings delayed over the summer due to COVID-19.

An official from the national organization said that it strives to keep kids “physically and emotionally safe,” which is why it opted to organize the review.

“Boys & Girls Clubs of America’s number one priority is the safety and protection of youth,” reads a statement from an official. “Enhancing our safety protocols is a continuous process.”


Despite the finding that some local clubs lack the support to be able comply with national safety guidelines, the report recognizes Boys & Girls Clubs of America’s “ongoing commitment to continuing enhancement of policies and practices” in child safety.

“BGCA has an extensive organizational network that analyzes, develops, trains and responds to the complex issues that Clubs face,” the report reads. “BGCA has made significant strides in their sexual misconduct prevention and response programming and it continues to roll out new initiatives to protect their community and keep their members safe.”

The issues identified in the report include difficulty for clubs in accessing resources, limits on the ability to execute programs at individual clubs and a lack of understanding of the purpose of those programs on the part of club staff.

The review recommends the organization make existing resources more easily available by updating its website to make documents and links to other materials more accessible.

RAINN advocates in the report that Boys & Girls Clubs of America focus on actively engaging clubs to use the abuse prevention resources already available to them, including policy templates and training videos. By doing this, clubs will be better prepared to respond to abuse and to prevent it, according to the review.

Another challenge identified by RAINN is that the same resources are not always available at each club.

The abuse prevention training program used by club staff also reportedly poses issues. The online learning offered is time intensive and requires a supervisor to help navigate the content, according to the review.

“The need for assistance to access these materials diverts the time and attention of staff members and negatively impacts the Club’s ability to meet staff-child ratios,” reads the report.

The review suggests creating a more flexible learning process, with a reformatted curriculum that builds a pathway specific to preventing abuse. Evaluating and updating the training material to be trauma-informed and more victim-centered, as well as diversity training that examines vulnerabilities of specific communities, was also recommended by RAINN.

“It is important that BGCA consistently communicate the message that they believe survivors and will support them through a fair and equitable response process,” the report says.

Last week, the Boys & Girls Clubs of America National Council made up of local club leaders voted to make some safety measures mandatory for all clubs, which was not previously the case.

The measures include standardizing all local club safety committees to “ensure that each and every one is being held accountable to the same metrics and responsibilities,” officials said this week.

The board also voted to strengthen the reference check requirement to clarify that all clubs must receive rehire eligibility information for all prospective staff and volunteers who previously worked at other clubs before being allowed to be employed or volunteer at another one.

In Sonoma, Calif., a perpetrator was able to move to another club even after the abuse was reported to staff at the original club, according to an ongoing civil lawsuit. He was later convicted of child sexual abuse and is now in prison.

The club denied every allegation made in the complaint in documents filed in the civil case and the national organization has denied wrongdoing on its part. BGCA has said it can’t comment on specific cases.

Existing requirements for what kinds of criminal convictions should prohibit someone from being hired are being enhanced, according to the organization. Since 2005, Boys & Girls Clubs of America has required all staff members and volunteers who have contact with children to undergo criminal background checks annually. Violent felonies, convictions of any charges related to harming a child are already disqualifying.

Clubs will now be required to report any licensing inspection failures within 24-hours to the national organization, to display its safety helpline and crisis text line and tell parents about safety policies when their child applies.

“The problem is, every youth-serving organization can adopt procedures,” she said. “But if not they’re not being carried out on the ground, children simply are not protected.”

Rules need to be routinely enforced across the organization, she said.

Viktoria Sundqvist contributed to this report.

How local grocers are trying to keep employees, customers safe

The Day – – News from southeastern Connecticut

The Day – – News from southeastern Connecticut

The Day – Health officials are quitting or getting fired amid outbreak