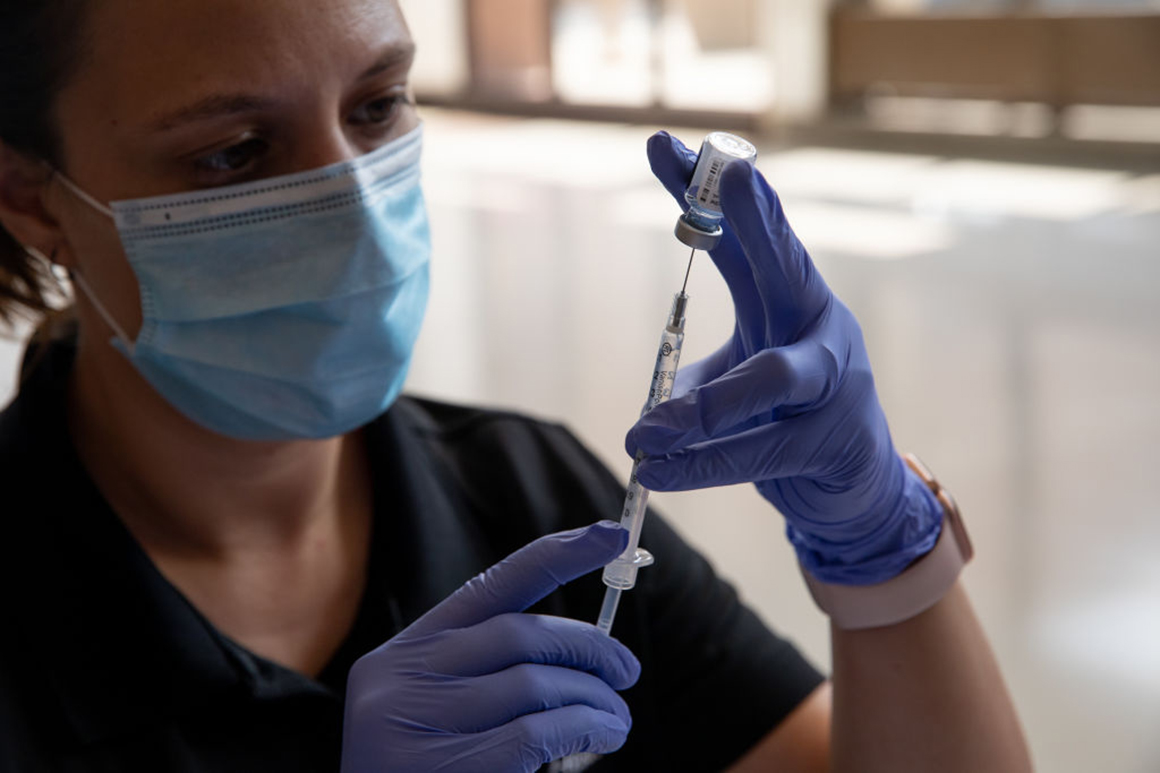 POLITICO spoke to 11 current and former health officials and people familiar with the matter who described growing exasperation with the administration’s disjointed process for implementing its booster plan. Those sources said there is little coordination between federal health agencies, even as two top FDA officials try to guide the rollout.

“We understand the importance of additional vaccine doses for control of this pandemic and will move as rapidly as possible to evaluate all submissions. Responding to this pandemic requires an all of government approach,” an FDA spokesperson told POLITICO. “FDA has and will continue to make regulatory decisions. And the [Centers for Disease Control and Prevention’s vaccine advisory committee] will continue to make clinical recommendations.”

Acting FDA Commissioner Janet Woodcock sent a memo Tuesday evening to vaccine regulators, reiterating her support as frustration over the process spreads within their ranks. “The issues are complex and the days are long, but please know the work you all have done to date and will continue to do in the days, weeks and months ahead, will hopefully one day allow us to fully put Covid-19 behind us and better prepare us for future challenges,” Woodcock wrote.

President Joe Biden’s Covid-19 czar Jeff Zients backed up FDA as the regulatory “gold standard” in a Tuesday press briefing shortly after the departure news. “[The booster] decision was made by and announced by the nation’s leading public health officials… and as our medical experts laid out having reviewed all the available data, it is in their clinical judgment that it’s time to prepare Americans for a booster shot,” he said. “We announced our approach to stay ahead of the virus and to be transparent on latest data.”

The tensions between FDA’s regulators and top Biden administration officials — including Woodcock, who has publicly endorsed the booster plan — come as the agency begins to tackle its most difficult decisions yet on Covid-19 shots. Many center around making them available to children under 12, whose bodies react differently to the virus and vaccines to prevent it. FDA will have to decide whether the rising number of cases in kids warrants making shots available to them on an emergency basis, before the lengthier approval process, which is more likely to detect any rare side effects.

But for now, much of the discord within the agency centers on the administration’s decision to push ahead with boosters before FDA’s top scientists had a chance to weigh in.

Woodcock and Marks were instrumental in crafting an Aug. 18 statement from HHS officials on the Sept. 20 booster timeline, said one senior official. That person said that the timeline was informed in part by Woodcock and Marks’ estimation of when they would get key data from vaccine makers, but also could shift based on new data, echoing the joint statement.

Another senior health official with direct knowledge of the situation said that political appointees within the White House largely steered the mid-August booster announcement.

The tension within the administration plus open skepticism from outside experts has fueled finger-pointing and divisions among health agencies. Career scientists in particular have been confused and surprised by the process, multiple people involved in the talks said.

Biden added to the confusion and controversy last weekend when he suggested that boosters could be administered just five months after the initial regimen, rather than the eight his administration had just proposed. Those remarks, coming after a meeting with Israeli Prime Minister Naftali Bennett, fueled worries that an administration that had pledged to “follow the science” was letting politics dictate outcomes.

But others familiar with the administration’s thinking said that Biden and his top health aides, including Zients and chief medical adviser Anthony Fauci, had to lay the groundwork for booster shots so the public would be ready for what they saw as the unavoidable reality of additional vaccinations.

“If the White House didn’t lead, what would happen?” said a person familiar with the discussions behind the scenes.

Yet, the confusion over the plan continues to build. While Pfizer completed its initial booster application on Aug. 27, it is unclear when Moderna and Johnson & Johnson might join its ranks, or when FDA will approve Pfizer’s submission. Pfizer also has data coming in mid-October tracking booster doses administered between 4.8 and eight months after the original regimen.

Biden’s five-month remark was “an innocent question” by the president after hearing from Bennett that Israel has forged ahead on broad booster dosing, a person familiar with the discussion said. In reality, the timeframe for additional doses comes down to the FDA and the companies submitting data — and likely will turn out to be a range of several months for getting a third dose rather than a specific window, they added.

Biden health officials are still confident that they will “have enough information and enough data” by Sept. 20 to make that call, the person familiar said. Several pointed to Israel’s booster data and a “clear” benefit to additional doses, as one health official said.

But the abrupt departure of two top officials from FDA’s vaccine department, the Center for Biologics Evaluation and Research, has shaken many current and former officials who say it resonates at a critical moment in vaccine regulation. “Supporting the career staff at CBER is extremely important right now, they have a tremendous amount of experience,” Bush-era FDA Commissioner Mark McClellan told POLITICO.

While third doses are still only authorized for immunocompromised people, including organ-transplant patients, others who don’t fit into that category have plunged ahead with additional vaccinations under the mistaken notion that FDA has already given the greenlight. Nearly one million booster doses have already been administered in the U.S. according to the latest CDC data.

“Many, many, many” providers in southern states with coronavirus case surges are dosing health care workers and patients with boosters absent an FDA approval because of confusion over Biden booster remarks, said Helen Talbot, an infectious-disease specialist at Vanderbilt University and member of CDC’s Advisory Committee on Immunization Practices, the panel that recommends how vaccines are used.

“This highlights, critically, the need for any vaccine recommendations to go through the normal avenues and not come out from outside,” she said during a Monday meeting of the panel. “It is very frightening to me that healthcare providers, trying to do the best job that they can, are taking guidance from HHS and White House, and now have put themselves at risk.”

Former Trump administration officials are also privately fuming over Biden’s approach to boosters after being pilloried for pressuring the agency on drug and vaccine decisions. During the pandemic’s first year, then-President Donald Trump repeatedly accused FDA of slowing key vaccine decisions to hurt him politically and called for FDA authorization of the unproven treatment hydroxychloroquine.

“It’s unprecedented,” that the Biden administration would announce a specific booster rollout date before regulators had weighed in, said one Trump official. That person argued that while the former president criticized the FDA, he did not say that a regulatory move would happen on or by a particular date. Trump did say vaccines were likely before Election Day, and while aides downplayed his promises, the effect was chilling for vaccine confidence.

By contrast, Biden came into office promising that scientists would lead these decisions and messaging, not the White House — a pledge driven in large part by the politicization of vaccines and other public health measures leading up to the election.

But the president may be regretting that pledge after witnessing the slow pace with data crunching by CDC, the public health agency marshaling vast amounts of information on vaccine performance, including the likelihood of breakthrough infections, another former Trump official said.

While the agency has released five studies in recent weeks — some showing fading immunity among health care workers and more breakthroughs than previously recorded — other Biden officials say they are waiting anxiously for a collection of state data that many expect will provide more definitive evidence that breakthrough infections are much higher than previously thought.

The concerns over CDC’s pace could color the coming decisions about vaccinating young children against Covid-19. As the agency that collects data on infections and hospitalization in kids, CDC is positioned to give FDA the clearest picture of how quickly it should move to make vaccines available to children under 12.

Biden officials are well-aware of the looming dilemma, said a person familiar with discussions, and are “going to try and put pressure on them to expeditiously get data.”

Erin Banco and David Lim contributed to this report.