President Joe Biden on Tuesday condemned the “poison” of white supremacy and said the nation must “reject the lie” of the racist “replacement theory” espoused by the shooter who murdered 10 Black Americans in Buffalo.

Speaking to victims’ families, local officials and first responders, Biden said America’s diversity is its strength and the nation must not be be distorted by a “hateful minority.”

“In America, evil will not win, I promise you,” Biden said. “Hate will not prevail, white supremacy will not have the last word.”

The president and first lady Jill Biden spoke in Buffalo Tuesday after visiting a makeshift memorial outside the supermarket, where they laid flowers and paid their respects to the victims of the deadly shooting. 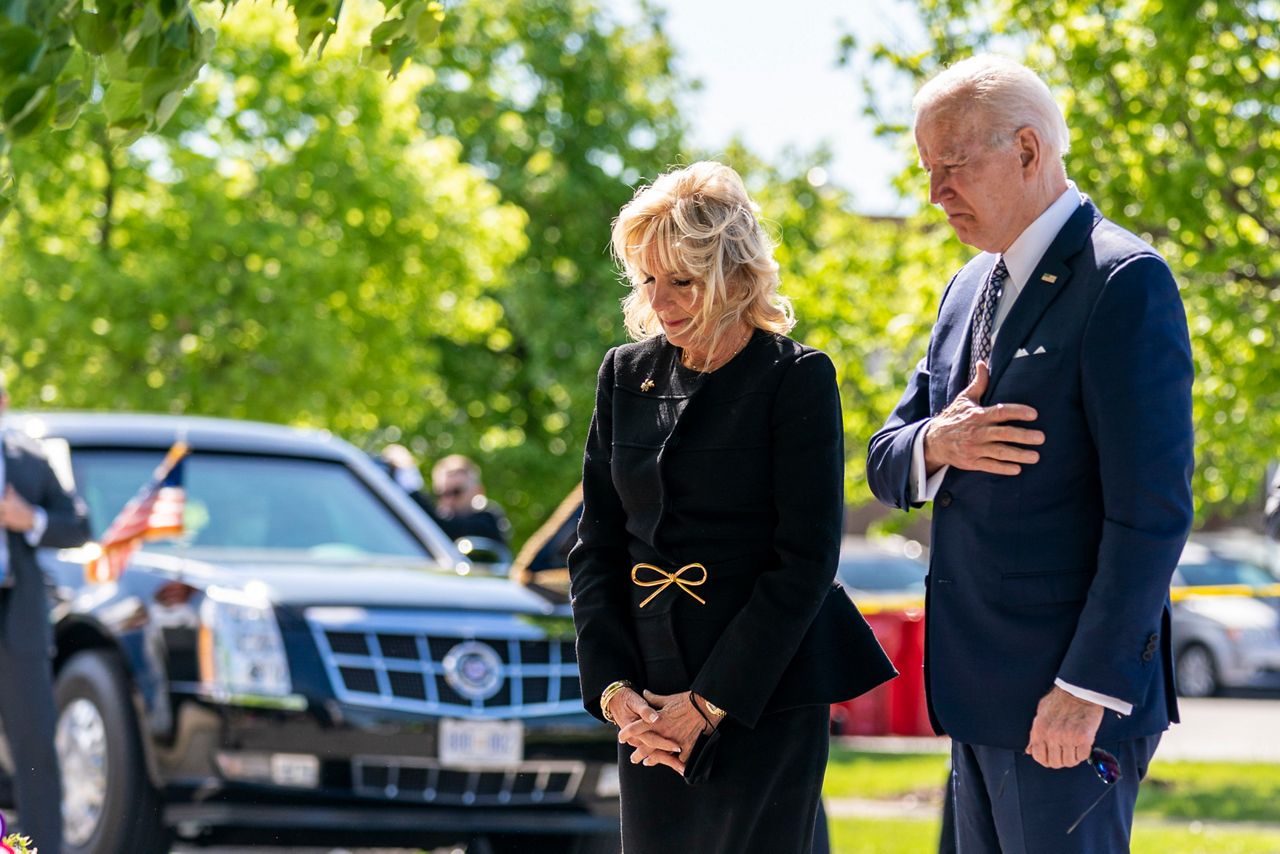 President Joe Biden and first lady Jill Biden pay their respects to the victims of Saturday’s shooting at a memorial across the street from the TOPS Market in Buffalo, N.Y., Tuesday, May 17, 2022. (AP Photo/Andrew Harnik)

President Biden, a devout Catholic, made the sign of the cross before stepping aside to let other members of the delegation traveling with them – including Gov. Kathy Hochul and Senate Majority Leader Chuck Schumer, D-N.Y. – lay flowers as well. 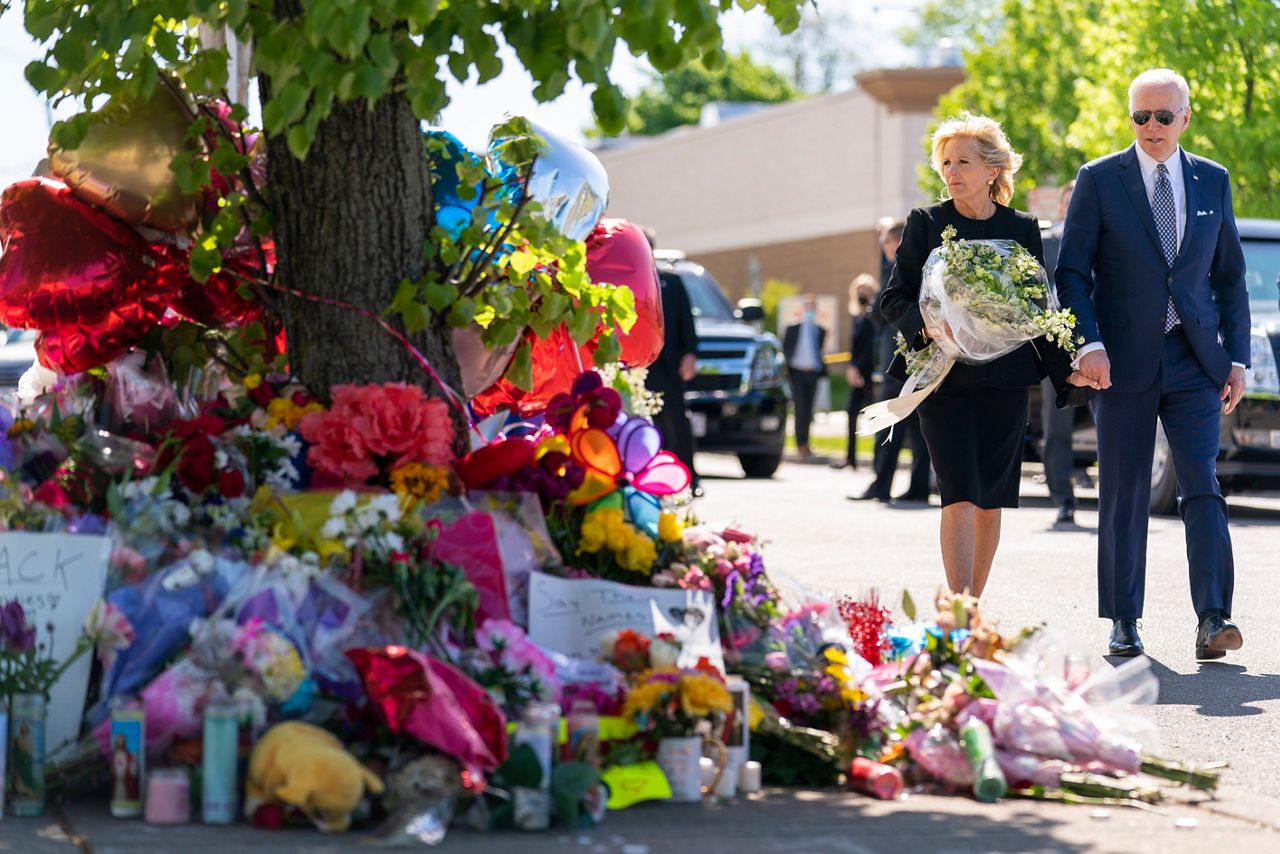 President Joe Biden and first lady Jill Biden pay their respects to the victims of Saturday’s shooting at a memorial across the street from the TOPS Market in Buffalo, N.Y., Tuesday, May 17, 2022. (AP Photo/Andrew Harnik)

The Bidens then headed to meet privately with families of the victims, first responders and local officials.

To begin his remarks later Tuesday afternoon, Biden memorialized each of the ten shooting victims, some of which he said were going to buy a cake for their daughter’s birthday or snacks for their weekly movie night.

“Ten lives cut short in a grocery store,” he said. “Evil did come to Buffalo. It’s come to all too many places.”

“White supremacy is a poison. It’s a poison … running through our body politic. And it’s been allowed to fester and grow right in front of our eyes,” the president said. “We need to say as clearly and forcefully as we can that the ideology of white supremacy has no place in America.”

It’s a message that Biden has delivered several times since he became the first president to specifically address white supremacy in an inaugural speech, calling it “domestic terrorism that we must confront.” However, such beliefs remain an entrenched threat at a time when his administration has been preoccupied with crises involving the pandemic, inflation and the war in Ukraine.

“Jill and I have come to stand with you, and to the families, we have come to grieve with you,” Biden said. He added: “Now’s the time for people of all races, from every background, to speak up as a majority and American and reject white supremacy.”

Biden did call for measures to keep assault weapons “off our streets” and to address the use of the internet to radicalize people to violence. Speaking to reporters later, he pointed to the ten-year assault weapons ban he helped pass as a senator in 1994, saying he hopes to convince Congress to do something similar once again.

“It is going to be very difficult, but I am not going to give up,” he said on the tarmac at Buffalo’s airport.

Replacement theory is a racist ideology, which has moved from white nationalist circles to mainstream, that alleges white people and their influence are being intentionally “replaced” by people of color.

“It’s important for him to show up for the families and the community and express his condolences,” said Derrick Johnson, the president of the NAACP. “But we’re more concerned with preventing this from happening in the future.”

It’s unclear how Biden will try to do that. Proposals for new gun restrictions have routinely been blocked by Republicans, and racist rhetoric espoused on the fringes of the nation’s politics has only grown louder.

On Monday, Biden paid particular tribute to one of the victims, retired police officer Aaron Salter, who was working as a security guard at the store. He said Salter “gave his life trying to save others” by opening fire at the gunman, only to be killed himself.

Payton Gendron, 18, was arrested at the supermarket and charged with murder. He has pleaded not guilty.

Before the shooting, Gendron is reported to have posted online a screed overflowing with racism and antisemitism. The writer of the document described himself as a supporter of Dylan Roof, who killed nine Black parishioners at a church in Charleston, South Carolina, in 2015, and Brenton Tarrant, who targeted mosques in New Zealand in 2019.

Buffalo Police Commissioner Joseph Gramaglia said Gendron is “someone who has hate in their heart, soul and mind,” and he called the attack on the store “an absolute racist hate crime.”

So far investigators are looking at Gendron’s connection to what’s known as the “great replacement” theory, which baselessly claims white people are being intentionally overrun by other races through immigration or higher birth rates.

The racist ideology is often interwoven with antisemitism, with Jews identified as the culprits. During the 2017 “Unite the Right” march in Charlottesville, the white supremacists chanted “Jews will not replace us.”

“These actions we’ve seen, these hate-filled attacks, represent the views of a hateful minority,” Biden said.

Aboard Air Force One on Tuesday, White House press secretary Karine Jean-Pierre slammed the ideology and refused to call out by name those who espouse it, not wanting to give them a platform.

“The people who spread this filth, they know who they are and they should be ashamed of themselves but I’m not going to give them or their noxious ideas they are pushing the attention that they desperately want,” she said.

In the years since Charlottesville, replacement theory has moved from the online fringe to mainstream right-wing politics. A third of U.S. adults believe there is “a group of people in this country who are trying to replace native-born Americans with immigrants who agree with their political views,” according to a poll conducted in December by The Associated Press and the NORC Center for Public Affairs Research.

He repeated the same theme a month later, saying that “this policy is called the great replacement, the replacement of legacy Americans with more obedient people from faraway countries.”

Carlson’s show routinely receives the highest ratings in cable news, and he responded to the furor Monday night by accusing liberals of trying to silence their opponents.

“So because a mentally ill teenager murdered strangers, you cannot be allowed to express your political beliefs out loud,” he said.

His commentary reflects how this conspiratorial view of immigration has spread through the Republican Party ahead of this year’s midterm elections, which will determine control of Congress.

Alex DeGrasse, a senior adviser to Stefanik’s campaign, said Monday she “has never advocated for any racist position or made a racist statement.” He criticized “sickening and false reporting” about her advertisements.

Stefanik is the third-ranking leader of the House Republican caucus, replacing Rep. Liz Cheney, R-Wyo., who angered the party with her denunciations of Trump after the Jan. 6 attack on the Capitol.

Cheney, in a tweet on Monday, said the caucus’ leadership “has enabled white nationalism, white supremacy, and anti-Semitism. History has taught us that what begins with words ends in far worse.”

“The Democrats want open borders so they can bring in and amnesty tens of millions of illegal aliens — that’s their electoral strategy,” Blake Masters, who’s running in the Republican Senate primary in Arizona, wrote on Twitter hours after the Buffalo shooting. “Not on my watch.”

A spokesperson for Masters did not respond to a request for comment.

Jean-Pierre indicated that the White House would speak more broadly about racism than singling out specific people for criticism.

“Once you get into calling out people’s names, then you get away from that issue,” she said.

Although Biden has not spoken directly about replacement theory, his warnings about racism remain a fixture of his public speeches.

Three days before the Buffalo shooting, at a Democratic fundraiser in Chicago, Biden said, “I really do think we’re still in the battle for the soul of America.”

Biden said he hadn’t planned to run for president in 2020 — he had already fallen short in two previous campaigns, served as vice president and then stepped aside as Hillary Clinton consolidated support for the 2016 race — and was content to spend some time as a professor at the University of Pennsylvania.

But he said he was disgusted “when those folks came marching out of the fields in Charlottesville, Virginia, carrying torches” and repeating the “same anti-Semitic bile chanted in the streets of everywhere from Nuremberg to Berlin in the early ’30s.”

And he recalled how Trump responded to questions about the rally, which resulted in the death of Heather Heyer, a young woman who was there to protest the white supremacists.

“He said there are very good people on both sides,” Biden said.

Johnson, the NAACP president, said the country needs to “finally chart a course so we can as a nation begin to address domestic terrorism as we would foreign terrorism — as aggressively as possible.” 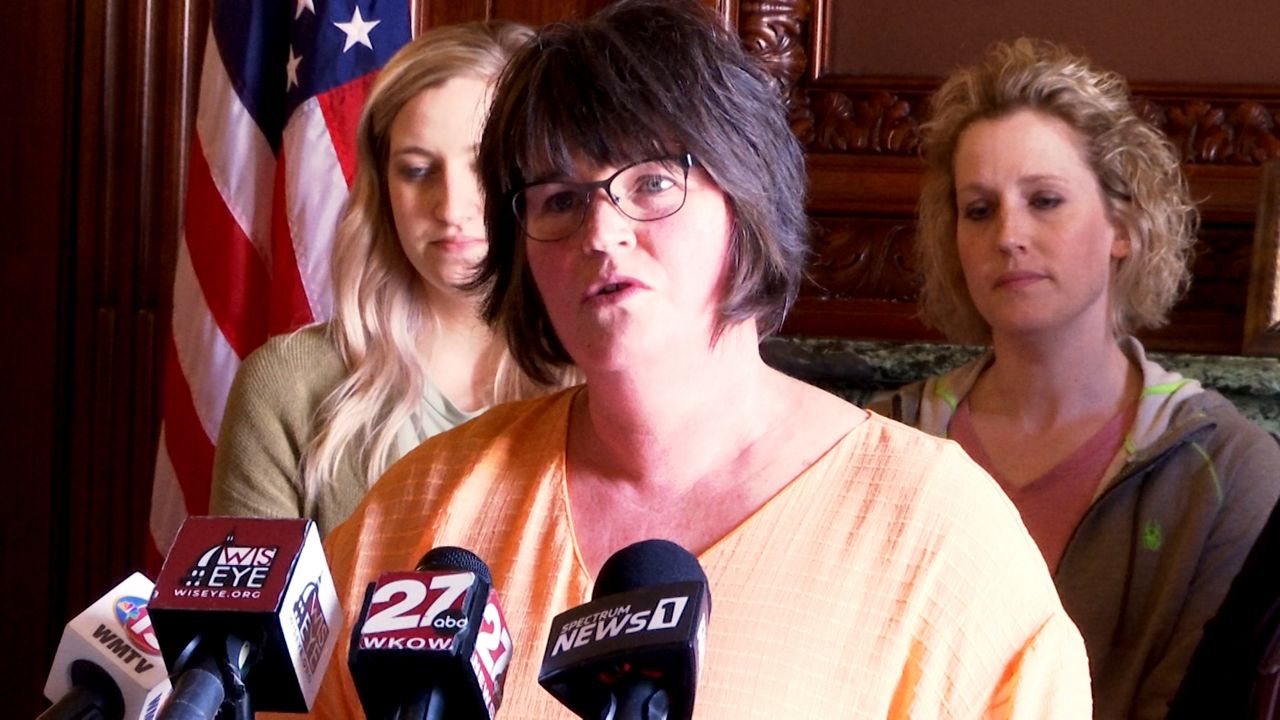 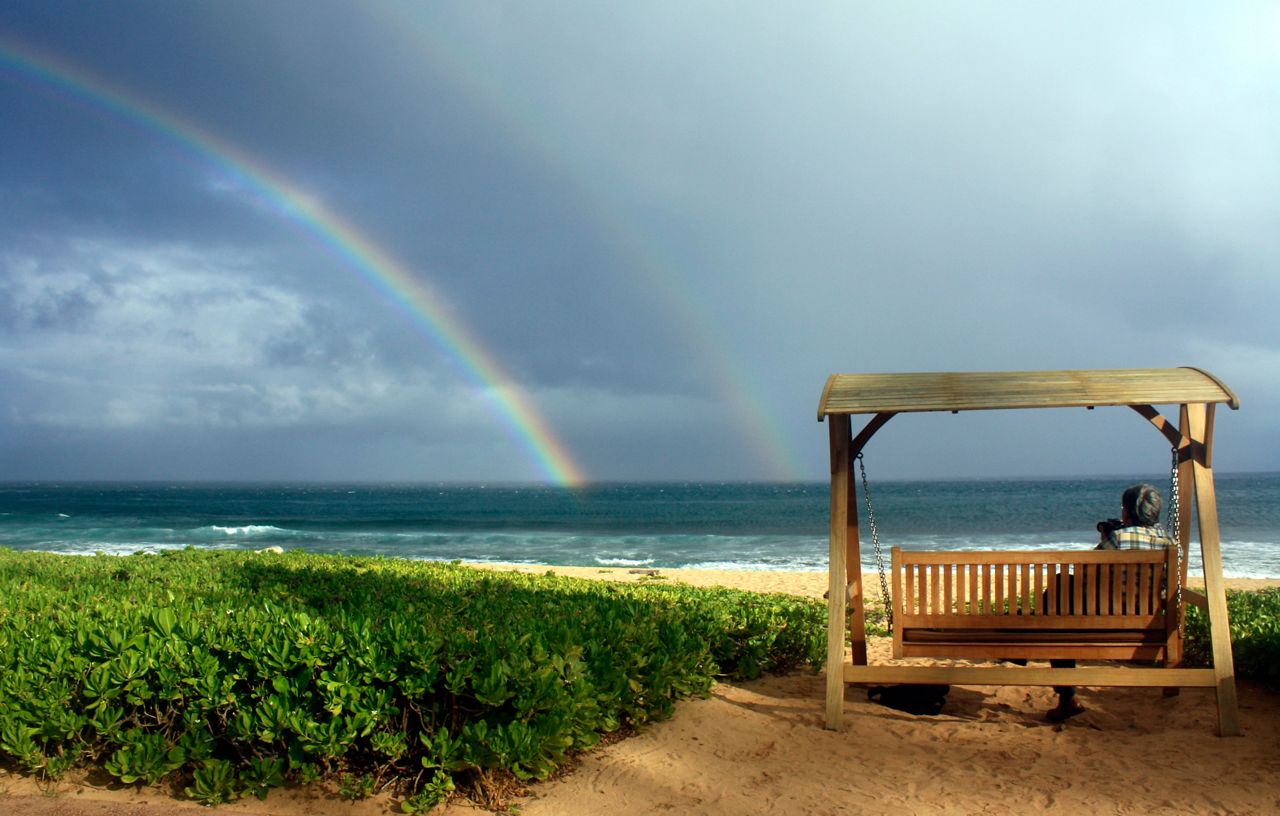 Advice for parents of children under 5

Black Wisconsinites were half as likely as white applicants to get pandemic unemployment payments, report finds

Milwaukee County is seeing a rise in its youth detention population. Will $7 million in pandemic funds reverse that trend?