Antisemitism, the oldest hatred, is thriving in the United States, as evidenced by last weekend’s hostage crisis at the Congregation Beth Israel synagogue in Texas. It’s still terrorizing Jewish communities and serving as the gateway to inspiring violent extremists, both here and abroad, who in turn use it to harm marginalized communities.

As such, a multi-racial and multi-faith coalition must recognize and combat antisemitism to protect both our Jewish neighbors and our fragile democracy.

Last weekend’s harrowing incident also reminded us that antisemitism is as stupid as it is dangerous. Forty-four year-old British citizen Malik Faisal Akram held Jewish worshippers hostage last Saturday for more than eleven hours and demanded the release of Aafia Siddiqui, a Pakistani Muslim national, currently serving an 86-year sentence at a Texas facility for the attempted murder and armed assault of US officers in Afghanistan.

Akram flew to New York last month from England, stayed at a homeless shelter, eventually made his way to Texas, and then decided to pick the closest synagogue he could find near Siddiqui’s facility. He is not related to Siddiqui nor does he have any association with those who are advocating for her case or her legal team. The Congregation Beth Israel synagogue has no involvement whatsoever in her case or conviction. Their only connection was proximity.

Akram could have chosen a packed restaurant or grocery store for his idiotic and criminal endeavors, but he chose a synagogue. He was obviously inspired by antisemitic beliefs and conspiracies, and didn’t see the terrified Jewish hostages as diverse individuals and human beings, but rather they were immediately flattened and essentialized as “The Jews” — members of this insidious, powerful collective that are the supposed architects of his own misery or had magical access to power that would force the United States to free Siddiqui and return her to Pakistan.

If he had spent any time actually talking to the Reform synagogue’s Rabbi Charlie Cytron-Walker, he’d learn of his respected interfaith work and excellent relations with local Muslim clergy and communities. He’d also learn that they don’t have space lasers that start wildfires, or the ability to control the weather, or share a hive-mind with all Jews around the world.

But none of that matters, because bigots aren’t interested in nuance. They are, however, interested in antisemitism. That’s a common denominator shared by both violent Muslim extremists and white supremacists.

“It is no accident that a rising tolerance for authoritarianism and racism in the United States is accompanied by a surge in antisemitism,” said Eric Ward, Executive Director of the Western States Center dedicated to promoting inclusive democratic movements and where I’m a Senior Fellow. “This form of Jew-hating,” Ward added, “not only threatens Jews with physical harm but provides a pseudo-justification for the ethnic cleansing of people of color. Racial justice leadership needs to contend with this reality and act accordingly.”

Antisemitism is used by bigots to also beat up on other marginalized communities. A persistent conspiracy obsession among white supremacists is the replacement theory, which has been directly or indirectly promoted by GOP members of Congress, such as Reps. Paul Gosar and Marjorie Taylor Greene, and parrotted on Tucker Carlson’s highest-rated cable news show.

According to a variant of this conspiracy theory, “the Jews” are allegedly the nerve center of a global conspiracy that uses Black people, Muslims, feminism, LGBTQ+ communities, and brown immigrants to weaken and replace the white man and “Western” civilization. In 2022, we no longer need the dangerous and debunked “Protocols of Elders of Zion,” an early 20th-century Russian hoax that popularized the antisemitic myth of Jews plotting to attain global power, because now we have the unhinged “QAnon” movement and any number of unhinged conspiracy theories about secret puppet masters controlling the US government.

The vague, catch-all term “globalists” is now used to decry international elites who allegedly have all the money and power and are using it to oppress the common (white) man. It’s also frequently deployed as a synonym for “The Jews.” For example, right-wing authoritarian rulers, such as Hungary’s Viktor Orban, use the label against George Soros, a Hungarian, Jewish-American billionaire who is now the global bogeyman for crime, liberalism, and unchecked immigration. Naturally, former President Donald Trump entertained the lie that Soros funded the “caravan” of “invaders”—a cynical, anti-migrant fake controversy Trump and the GOP deployed during the lead-up to the 2018 midterms.

That particular conspiracy in part fueled the murderous terrorism of Robert Bowers in 2018 when he attacked the Tree of Life Synagogue in Pittsburgh and killed 11 Jewish congregants. He wanted to punish “the filthy evil Jews” for “bringing the evil Muslims into the country!” Several months later in Christchurch, New Zealand, Brenton Tarrant—a terrorist inspired by replacement theory—attacked two mosques with the intention of punishing Muslim invaders. He killed 51 people, injured 40, and traumatized an entire community. A few months later in El Paso, Texas, another killer inspired by Tarrant’s terrorism and the replacement theory shot and killed 23 people at a Wal-Mart. He wanted to punish the supposed Hispanic invaders. Bigots aren’t nuanced in their hate.

I was concerned that after the identity of the hostage-taker was revealed to be Muslim, bigots who couldn’t care less about our respective communities, but crave to divide and tear us apart, would use this antisemitic attack to launder their Islamophobia. Many of these same individuals who actively promote antisemitism were suddenly concerned about antisemitism, just to bash Muslims. People who avoid any mention of white supremacist violence or gaslight us about the Jan. 6 attempted insurrection—an incident of mass violence inspired in part by QAnon—were now deeply concerned about national security, terrorism, and law and order. Others, who simply wanted to advance their political ideologies, also joined in.

I tweeted a thread warning that some would use the antisemitic incident and hostage crisis to spread anti-Muslim bigotry, and pleaded with people to not to fall for it since it’s used to divide Jewish and Muslim communities. Instead, I asked us to stand in solidarity against hate. Most people, including many Jewish friends, appreciated the message and shared my concern that their community’s pain would be fuel for more hate. They refused to indulge or entertain it.

Others, of course, proved my point, trying to hold me and other Muslims responsible for the actions of a violent Muslim man we’d never met. During his Arizona rally on Saturday, Trump couldn’t help but use the hostage crisis to throw another anti-Muslim dog whistle to his base, saying, “you’ll see who it is that’s holding so dangerously those hostages. I think I have a pretty good idea.” He also riled them up with the lie that white people were not allowed to get vaccines and told to go to the “back of the line” due to their race. His son, Donald Trump Jr., took the opportunity to spread the conspiracy that the FBI was “watching/working with the synagogue terrorist.”

In reality, Jews, Muslims, and people of color are facing the same threats and forces who are telling us to “go back” to our country. But this is our country, and we’re not going anywhere.

However, for all of us in marginalized communities to live here in security, we have to stand up to hate, especially antisemitism. We need to forcefully condemn it, especially within our own communities, and do our best to make sure our Jewish brothers and sisters never have to fear when they enter their houses of worship. 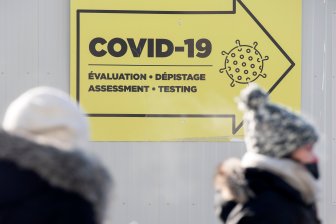 Biden and Blinken offer assurances to Ukraine, warnings to Russia