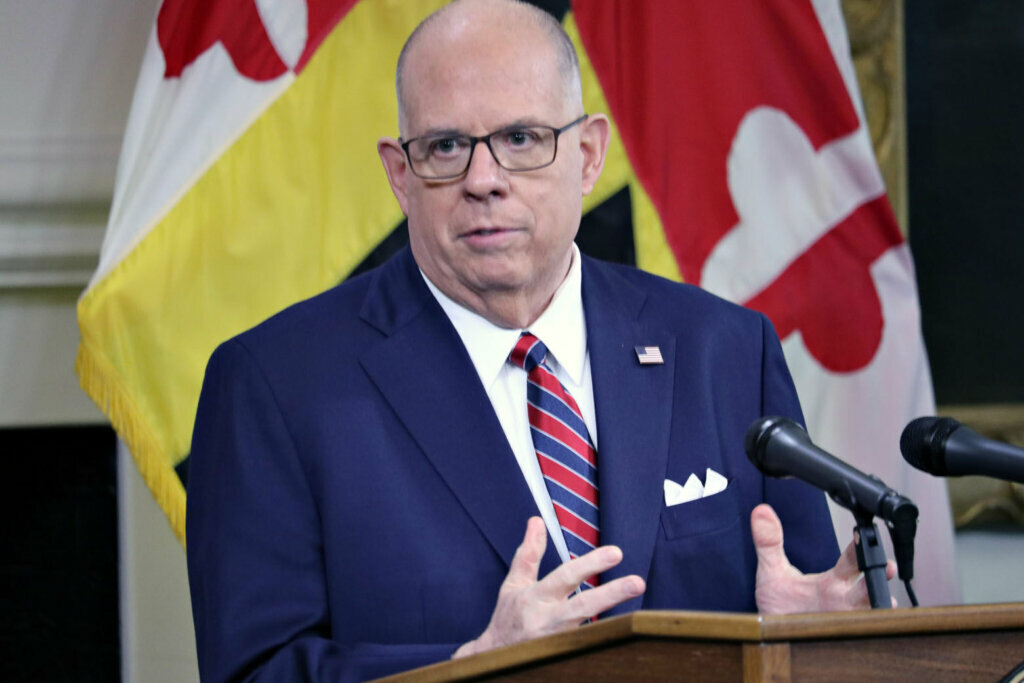 Maryland Gov. Larry Hogan said Thursday the state is opening up COVID-19 vaccine registration to all Marylanders and anticipates being able to offer them shots ahead of a previously announced April 27 date.

Maryland Gov. Larry Hogan said Thursday the state is opening up COVID-19 vaccine registration to all Marylanders and anticipates being able to offer them shots ahead of a previously announced April 27 date.

“As of today, every single Marylander who wants a COVID-19 vaccine can now preregister for an appointment at a mass vaccination site,” Hogan said during a news conference Thursday.

As it stands now, the state anticipates moving to Phase 3 of the vaccine rollout, under which all residents 16 and older are eligible for the shots, April 27. Hogan suggested that date was likely to be moved up if COVID-19 vaccine supply provided by the federal government continues ramping up.

“As a result of the robust infrastructure that we have built, our rapidly accelerating vaccination rate and, finally, that critical increase in vaccine supply, we likely will be able to make announcements in the days ahead regarding further acceleration of vaccine eligibility phases,” Hogan said.

Earlier this week, the state expanded eligibility to residents 16 and older with underlying medical conditions as well as people with disabilities. Starting April 13, the state is set to expand eligibility to Marylanders 55 and older and essential workers of any age in critical industries.

At the news conference Thursday, Hogan also detailed where the state’s new mass vaccine sites would be located.

The Germantown campus of Montgomery College and Timonium Fairgrounds sites, announced earlier this month, are set to open as state sites next week.

The week of April 12, sites are expected to open at Frederick Community College in Frederick and at the Navy Marine Corps Memorial Stadium in Anne Arundel County.

The following week, April 19, a mass vaccine site is expected to open at Ripken Stadium in Harford County.

The final of the state’s 12 mass vaccination sites is set to open the week of April 26 at the Mall in Columbia in Howard County.

The site, which opened two weeks ago, still has “plenty of capacity,” Hogan said, “and so we’re filling that capacity with people from wherever in the state without appointments.”

Overall, Maryland has administered more than 2.7 million doses, and more than 1 million Marylanders are now fully vaccinated. The state is administering an average of 57,000 shots a day.

As long as vaccine supply continues rolling in, Hogan said he anticipated being able to speed through the phases of the vaccine rollout.

“As long as they can continue to provide the supply, which we’re being promised but we have no control over that — we will be able to finish as many vaccines as we can possibly get done by the end of May.”

He said at some point, there will be enough demand for everyone who wants then and vaccine providers and the state will have to shift to “looking for people” to administer the shots to.

So far, about 75% of Maryland residents 75 and older have been vaccinated.

“Right now, it’s slowing down,” Hogan said. Of the remaining 25% “we either haven’t found them or reached them — or they don’t want a vaccine,” Hogan said.

Governor: Rise in cases due to variants, travel

The news on the vaccine front came as the state has recorded an uptick in coronavirus cases and hospitalizations in the last few weeks.

In eight of the past 10 days, the state has recorded more than 1,000 new coronavirus cases a day. The 1,584 new cases reported Thursday was the highest one-day total of new cases since Jan. 31. Meanwhile, the statewide positivity rate — the percentage of coronavirus tests coming back positive — has ticked up from 3.36% earlier this month to 5.51%.

Earlier this month, Hogan lifted coronavirus capacity restrictions on restaurants and other businesses while keeping in place the statewide mask mandate. Asked by a reporter Thursday about the rise in cases since the easing of restrictions, Hogan rejected the idea the uptick was tied to the reopening.

“We’re following the science,” Hogan said. “We don’t think it had anything to do with reopenings,” noting that some of the worst outbreaks elsewhere in the U.S., such as in New York, are places that have maintained tighter restrictions.

While President Joe Biden and health experts in his administration have called on governors to again tighten restrictions, Hogan suggested those admonitions were targeted to governors that had specifically relaxed rules on wearing masks.

“They were somewhat critical of states that had removed mask mandates, but they didn’t talk about, you know, people closing down businesses,” Hogan said.

For his part, the governor tied the recent rise in cases to several coronavirus strains that are more transmissible than the traditional strain and are believed to be driving the surging cases in New York, New Jersey and throughout New England.

“They appear to be moving down the coast … We are, obviously, not immune to these variants and viruses don’t recognize state borders,” Hogan said.

The governor said he is “increasingly concerned” about the variants and pointed to rising cases in Baltimore City and Baltimore County in particular as being driven by the variants.

The variants can only be identified by performing painstaking genetic sequencing of coronavirus tests.

Maryland, which as ramped up that sequencing work, has identified a total of 677 variant cases, with the vast majority — 86% — being the strain known as B. 1.1.7, which was first identified in the U.K. Six other variants have also been identified in Maryland, including strains first detected in New York, California, South Africa and Brazil.

“We are quite literally in a race between these variants and the vaccines,” Hogan said Thursday.

Earlier this week, officials in Montgomery County called on the governor to reimpose some coronavirus restrictions amid the rising case counts.

Shortly after the governor spoke Thursday, County Executive Marc Elrich tweeted that Hogan’s contention the rise of cases is not linked to lifting restrictions “goes against all the science we have been following. We can’t play games with people’s lives. Restrictions work.”

He included a map showing the number of coronavirus cases per 100,000 residents significantly lower in Montgomery County — which has been more slow to relax restrictions — compared to its neighbors.

For @GovLarryHogan to say that Maryland’s increase in cases has nothing to do with the lifting restrictions goes against all the science we have been following. We can’t play games with people’s lives. Restrictions work. Look at the map, @MontgomeryCoMD proves it so. pic.twitter.com/TuhTUeALLI

California woman says she drowned children to protect them