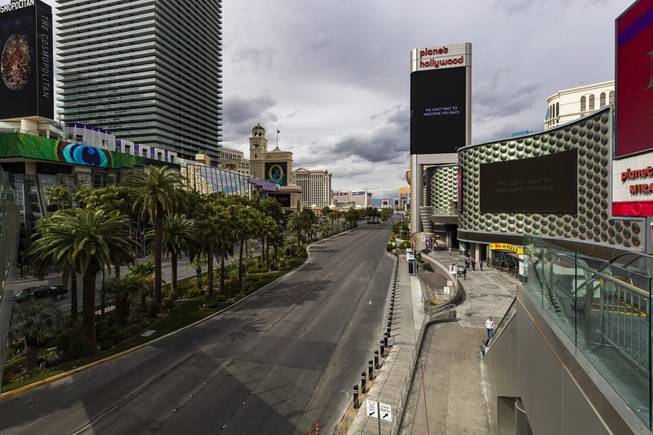 The Strip is seen mostly empty on the first day of the covid-19 quarantine, Wednesday, March 18, 2020.

Thirty days ago, at noon March 18, what long had been thought as the unthinkable occurred: Doors to the many casinos lining the Las Vegas Strip and Fremont Street, and throughout Nevada, were closed. Dealers walked away from their table games. Slot machines fell silent.

The casino closures were ordered by Gov. Steve Sisolak as part of his effort to stop the spread of the fast-moving and deadly novel coronavirus. Additionally, Sisolak suggested that all nonessential businesses close, a move he later ordered.

The Sun reported the closings online and in its March 18 edition under the banner headline: SHUTDOWN.

Sisolak’s orders were widespread and controversial. He met the criticism saying, “What are you willing to do to save your life and the life of the ones you love? Please take this seriously. Please stay home for Nevada.”

In the 30 days since, Sisolak has extended his executive orders through at least the end of this month, and the pandemic has touched all 17 Nevada counties and all 50 states. It has affected most every aspect of life, from shopping for groceries, going out to eat, meeting with friends, work, watching sports, visits to health providers, playing in parks …

Here’s a look at some of the other numbers associated with the pandemic as they relate to Southern Nevada over those past 30 days:

45: The Southern Nevada Health District reported a recovery rate on Tuesday of 45% for Clark County residents infected with COVID-19. Of the then 2,625 cases reported in Clark County, 1,141 patients had recovered. Statewide, positive test results for the coronavirus were at 3,321 as of Thursday, including a peak of 231 new cases on April 7. Starting March 26 when the statewide cases went from 420 to 535, there have been just two days with fewer than 100 new cases, according to the Nevada Health Response. The statewide death total Thursday night stood at 142.

60.6 million: With the mandatory shuttering of Nevada’s casinos, the state has experienced a loss of gaming taxes in the neighborhood of $60.6 million over the past 30 days. The state’s Economic Forum, a panel of five taxation experts from the private sector tasked with projecting the state’s revenue streams, estimated the state’s total tax revenue from gaming to be $805.2 million for 2020. On average that would mean about $2.2 million per day making its way from slot machines and table games throughout Nevada to the state treasury. The total is likely higher during the shutdown because of March Madness, one of the busiest weeks for visitors. Nevada collects tax revenue from each slot machine or table game in operation. Monthly gross revenue on the games, before taxes and deductions, is taxed in tiers: 3.5% of the first $50,000, 4.5% of the next $84,000 and 6.75% over $134,000. According to the Guinn Center, a nonprofit think tank, gaming taxes are expected to make up 17.4% of the state’s general fund in the 2020-2021 biennium.

300,000: As of this week, more than 300,000 Nevadans have applied for unemployment benefits since the shutdown, according to Gov. Steve Sisolak. The onslaught has overwhelmed the Nevada Department of Employment, Training and Rehabilitation resources, which administers the program. The office has tripled its staff over the last weeks and has distributed nearly $200 million in unemployment claims since March 15. The state will also disperse an additional $600 weekly to recipients as part of the federal economic stimulus bill. Those monies will also be backdated to March 15.

500,000: Number of students in grades K-12 in Nevada who have been at home since the governor ordered private and public schools across the state on March 15. But that doesn’t mean that learning has stopped. The Clark County School District — the fifth-largest in the nation — has continued distance-learning classes and has provided daily learning packets for students at designated pickup spots across the valley. While there are concerns about the shutdown’s impacts on lower-income students, CCSD officials say progress has been made reaching all students. Several teachers say more students have gradually begun to take the at-home schoolwork seriously as the shutdown has continued, even with none of the work being mandatory. The district is also in the process of delivering Chromebooks to students who don’t have a device at home.

4.7: Since the start of April, air travel in the United States is just 4.7% of what it was during the same time in 2019, according to Transportation Security Administration statistics. McCarran International Airport has been hit especially hard; passenger volume has been so low that the airport has closed two of its concourses, shuttered one of its parking lots and consolidated some security checkpoints. The numbers could keep going lower. “It’s hard for us to project how many flights a day we have right now because there are many airlines that are making the decision to cancel day of or day before,” McCarran spokesperson Christine Crews said.

1.1 million: From March 16 through April 14, the Clark County School District has distributed more than 1.1 million free meals for children out of school because of COVID-19, according to district officials. The meals, which include breakfast and lunch offerings, are handed out at various locations Monday through Friday. Children between ages 2 and 18 are eligible to receive the meals, though they don’t have to be present with their parents to pick up. The district is not alone in helping keep Nevadans fed during the pandemic. During the week that ended March 22, the first full week of the coronavirus crisis in Las Vegas, more than 300 pallets of food were donated to the Three Square Food Bank by the hospitality industry. Under normal circumstances, Three Square distributes about 50 million pounds of food annually, and that total is expected to grow significantly for 2020.

150: The state of Nevada has acquired an additional 150 ventilators in the last 10 days to supplement an expected shortage in breathing machines needed to fight the virus. Hospitals in Nevada had about 700 ventilators before the state received 150 on April 10 from the Strategic National Stockpile through the Federal Emergency Management Agency. The state on April 8 borrowed 50 ventilators from California. As of Thursday, 39% of the ventilators across Nevada were in use — they are also used by non-COVID-19 patients. Expanding medical capabilities has been a priority for officials, as the Las Vegas region ranks 298th out of 306 hospital referral regions in acute care bed capacity at 914 beds, according to the 2018 American Hospital Association Annual Survey of more than 300 referral regions. In response, hospitals such as University Medical Center have built makeshift facilities in their parking lot. Also, there’s a plan for a 900-bed temporary hospital at the Las Vegas Convention Center.

750,000: Raiders Owner Mark Davis said a total of three-quarters of a million attendees were expected for the local NFL Draft festivities originally scheduled from April 23 to April 25 on the Las Vegas Strip but since canceled. It’s important to note that a person who attended all three days would count three times. NFL studies show last year’s draft in Nashville attracted 600,000 total visitors for an economic impact of $224 million. NFL Commissioner Roger Goodell said Las Vegas would “blow” those numbers out before the league moved to an all-virtual draft format taking place in the ESPN studios in Bristol, Conn., in wake of the pandemic.

24: Crime in areas patrolled by Metro Police areas dipped about 24% from March 15 to April 11, the department reports. Violent crime was down about 10% while property crime dropped about 27%. Among the significant increases from the previous month was an uptick of 21 shootings. The nine killings probed by Metro’s homicide unit in the same time period was also an increase from the four it investigated from Feb. 16 to March 14. Budget constraints have been felt by Metro, which cut 112 part-time positions — 103 jobs — including the dismantling of the equestrian squad and the layoffs of its support staff. More cuts are reportedly expected this summer.

76: Some of the biggest gaming operators in Las Vegas saw their stocks fall by as much as 76% from recent months as casinos across the country shut down to help curb the spread of the coronavirus. At the close of trading on Jan. 16, Wynn Resorts stock settled at just over $152 per share. A little more than two months later, it closed at $43.02 — a 71% drop and its lowest mark since the Great Recession more than a decade ago. Caesars Entertainment Corp. stock, which closed at $14.56 on Feb. 18, bottomed out at $3.52 a month later —a 76% loss in just 30 days. Other gaming stocks — including MGM Resorts International, Boyd Gaming and Red Rock Resorts — also experienced sharp declines from mid-February to mid-March.

30: Over the last month, gas prices have dropped in the Las Vegas Valley more than 30 cents per gallon. Average gas prices as of Wednesday morning were $2.51 for a gallon of regular gas, according to AAA. The average price on March 15, two days before the governor’s order closing nonessential business, was $2.84. The national average on Wednesday was $1.84, and statewide the price was $2.44. Some local retailers have gas under $2 per gallon, including most Sam’s Club and Costco locations in the area, where prices were $1.94 or $1.95, according to GasBuddy.

11: A minimum of 11 home games for Las Vegas’ professional sports teams have been canceled so far with many more to follow. The total would have likely been higher already with the Vegas Golden Knights practically guaranteed a spot in the NHL Playoffs, which were scheduled to start last week. The Golden Knights had four home games, and seven away games, remaining in the regular season at the time NHL “paused” its year. The Las Vegas Lights and Las Vegas Aviators also saw their seasons affected, as they were postponed before ever starting. The Triple-A, Pacific Coast League Aviators were slated to play their first five games at home, in a series against the Albuquerque Isotopes. The United Soccer League’s Lights had four of their first six games on the road but were supposed to face clubs from Sacramento and San Antonio at Cashman Field on two Saturdays in March. The Aviators were scheduled to play a total of 70 games at Las Vegas Ballpark between April and September, while the Lights had 17 home matches on their calendar between March and October.

Study: Students falling behind in math during pandemic